We discussed about AWS Elastic Beanstalk in our previous tutorial.

So we are talking about IT orchestration where tasks are run in sequence in several different machines or servers.

Ansible does this by connecting to multiple machines through SSH and runs the tasks which have been configured into playbooks and uses a simple language called YAML (Yet Another Markup Language). 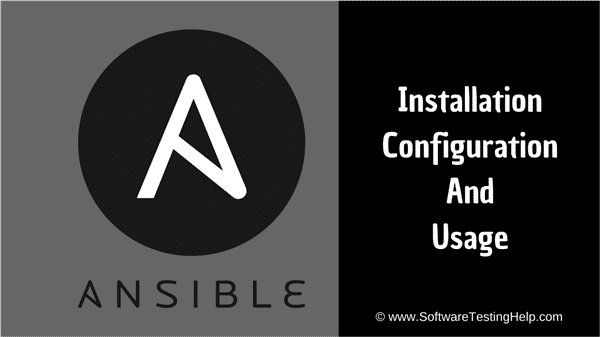 Most importantly Ansible does not use an agent to automate tasks on different machines.

Ansible ensures maintaining exact versions and up to date information to the software packages.

For Example,  if you want to install JDK 8 or Tomcat or any other software package in 10 or 20 different machines it is not actually feasible to go to all the machines and install them rather use Ansible to automate the installation or even software deployments using Playbooks and Inventory written in a very simple language.

In this 3 part Ansible Tutorial series, we will discuss hands-on approach on the following topics:

Ansible can be installed and run from any machine.

Throughout this tutorial, I will be using AWS EC2 instances to showcase the examples. I have used 2 instances (one control machine and other as a target for automating tasks) and Redhat Linux 7.5.

Whether on-premise or cloud instances you will need to open ports appropriately based on the tasks being automated. I have the following ports open as a part of the security group for the EC2 instances to demonstrate the examples mentioned in the tutorial. 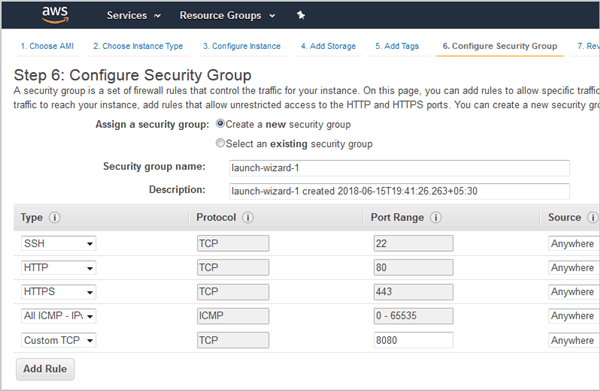 In the above screen, I have mentioned opening port 8080 as I will be showing about automating software deployment automation using Tomcat which will be useful from a DevOps point of view, especially during the continuous delivery process.

As mentioned before I will be using one control machine and a target machine. To start with installation, perform the steps as shown below in both the machines.

a) Create a common id on both the machines, for Example, ansible with SUDO privileges. This id will be used for communicating across all the machines involved for automation of tasks. 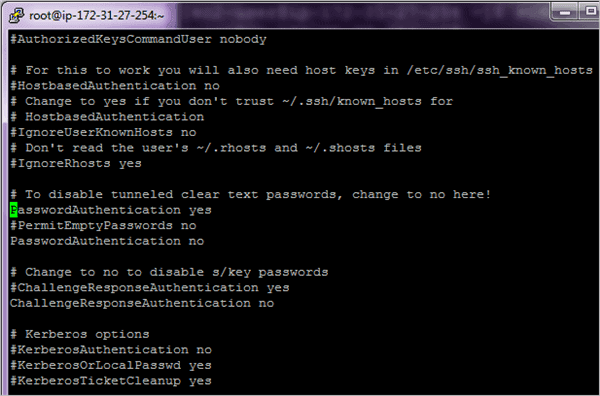 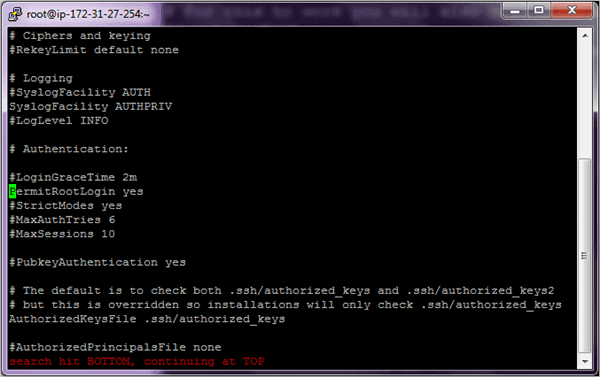 c) For complete automation of tasks, we will need passwordless SSH authentication else the whole process will not be used if you have to key in the password every time.

So post the changes done above if we run the command ssh <target machine> and ssh <control machine> we will need to key in the password every time which is not the right procedure to execute Ansible tasks. 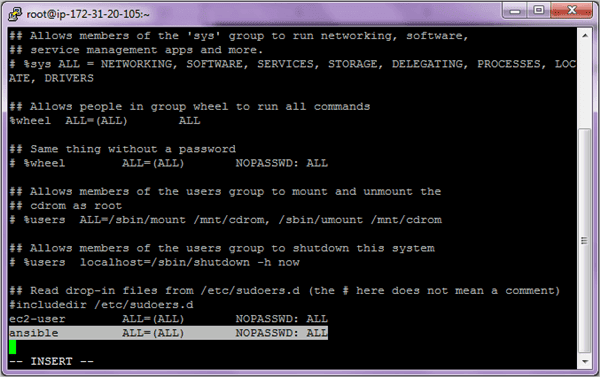 Save and exit the file after adding the user. 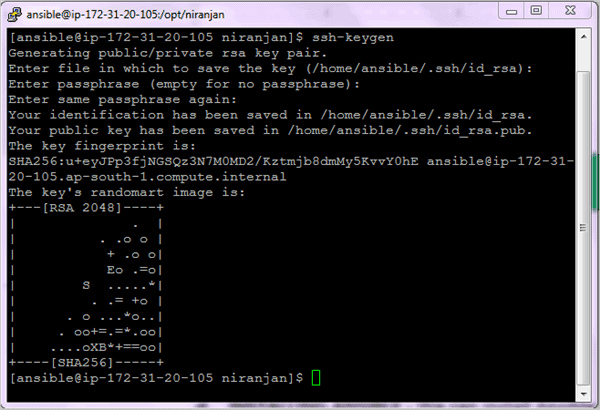 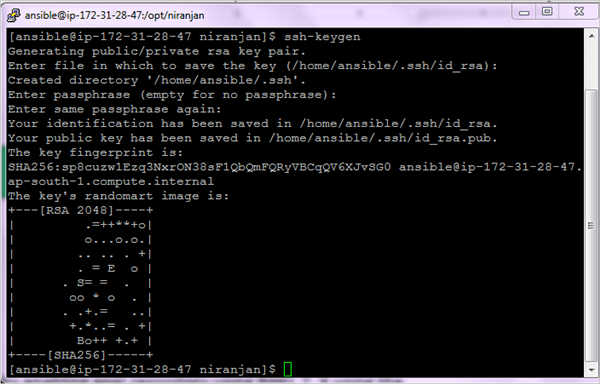 Copy the ssh key to the target machine and vice versa. 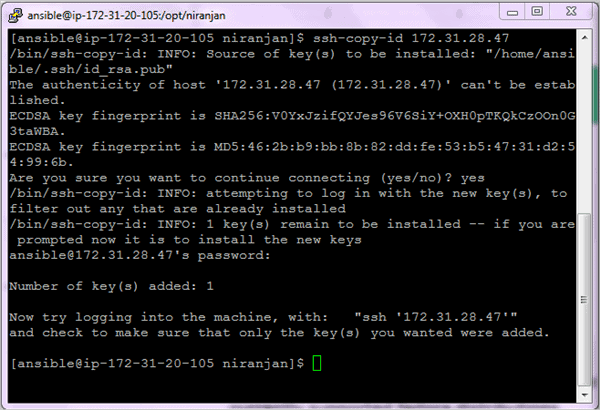 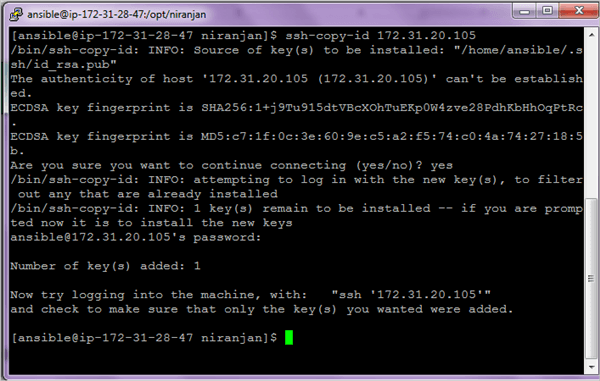 We are now able to log in without entering the password. After the check out of the ssh connectivity on both the machines and be logged in as ansible user.

f) Install wget if not installed on both the machines.

g) We can now install ansible on the Control machine only by enabling the EPEL repo from fedora which provides add-on software packages. Perform the following steps to install ANSIBLE.

h) Edit the ansible.cfg file and enable the inventory file parameter on the Control machine. 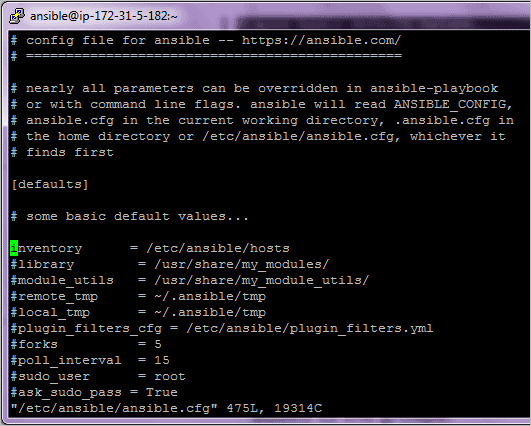 i) Ansible uses the concept of Inventory to manage and track the target machines. By default, this file is located in /etc/ansible/hosts and can be changed as well. A host file consists of groups for better classification and multiple machines under the group. All the required machines can be added to those groups.

Every group is denoted by a square bracket and a group name within. A server can actually exist in multiple groups.

Edit the inventory file /etc/ansible/hosts and add all the servers which need to be managed. 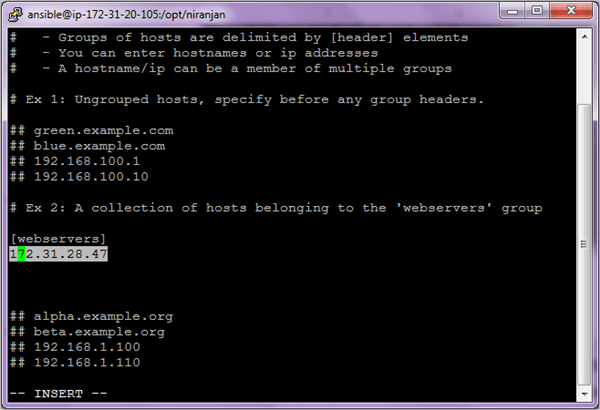 j) To test the connectivity of the servers under the webserver’s group run the ansible ping command as shown. Here ping is a module which performs a particular function to test whether the hosts can be connected as defined in the inventory file or not. We will see more about various modules and its examples in the next section.

To list the hosts in the inventory file, you can run the below command 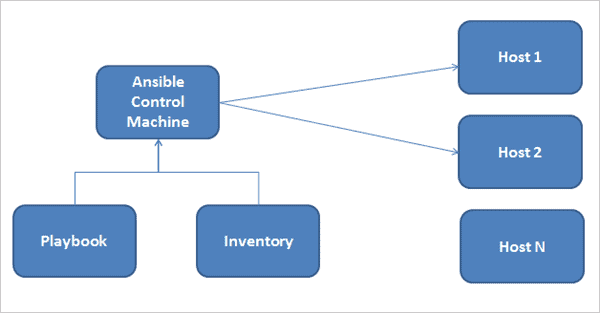 The control machine manages the execution of the Playbook. It can be installed on your laptop or on any machine on the internet.

The Inventory file provides a complete list of all the target machines on which various modules are run by doing an ssh connection and install the necessary software’s.

The playbook consists of steps that the control mechanism will perform on the servers defined in the inventory file.

Very important to understand here is that Ansible interacts with all the servers defined in the inventory through the SSH protocol which is a secure method of remote login. Every operation is done and file transfer is encrypted.

So as you would have seen in the previous section Ansible does not use any kind of database for installation and is very easy to install, we will now proceed with the actual usage of Ansible starting with Modules which is the main building block.

Modules are the main building blocks of Ansible and are basically reusable scripts that are used by Ansible playbooks. Ansible comes with a number of reusable modules. These include functionality for controlling services, software package installation, working with files and directories etc.

The syntax is as follows while running the ad-hoc commands which help in running single or simple tasks just once and which need not be run later. For E.g. just installing Tomcat on all servers.

Let’s have a look at some of the most popular Ansible modules and their usage through the ad-hoc commands and later on in the playbook.

To get information about the network or hardware or OS version or memory related information the setup module will help to gather the same about the target machines. On the control, the machine runs the below command. 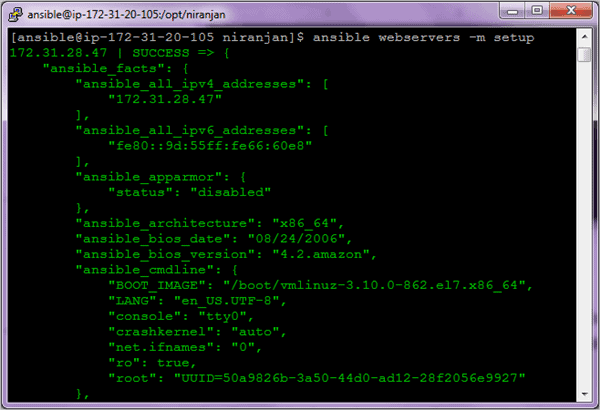 The command module simply executes a specific command on the target machine and gives the output.

Some of the Examples are given below

To execute any command in the shell of your choice you can use the Shell module. The shell module commands are run in /bin/sh shell and you can make use of the operators like ‘>’ or ‘|’ (pipe symbol or even environment variables.

So primarily the difference between the Shell and Command module is that if you actually do not need to use the operators like the ones mentioned then you could use the command module.

On the machines under webservers group check for the file created and run the command to view the text file.

Using this module one can create or delete users. 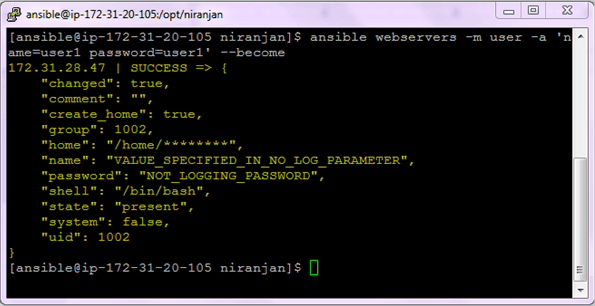 This module is used to create files, directories, set, or change file permissions and ownership etc 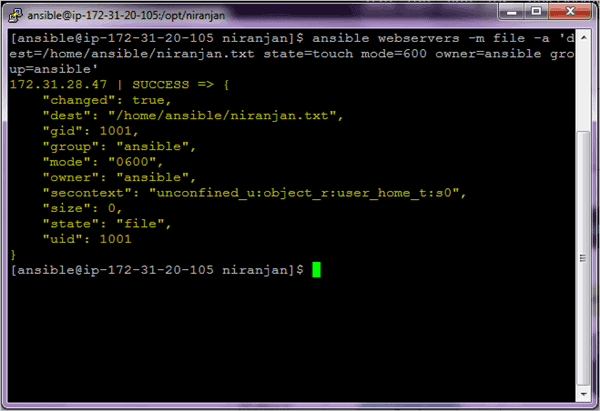 To create a directory using the file module, you need to set two parameters. 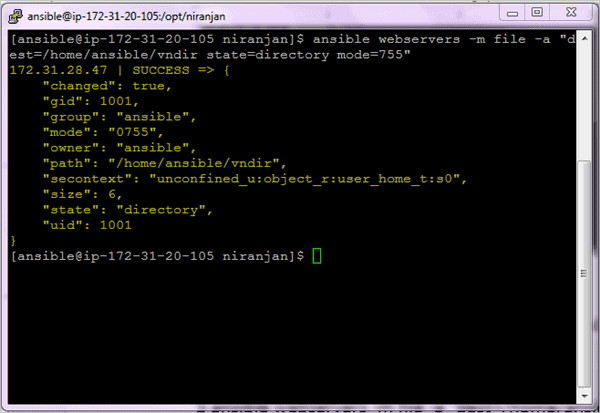 You can delete a directory by setting the state parameter value to absent. The directory and all its contents will be deleted.

It is used for copying files to multiple target machines. 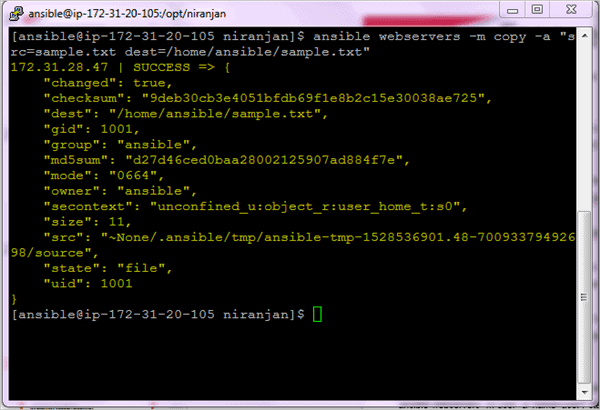 If you need to install software packages through ‘yum’ or ‘apt’ you can use the below commands. 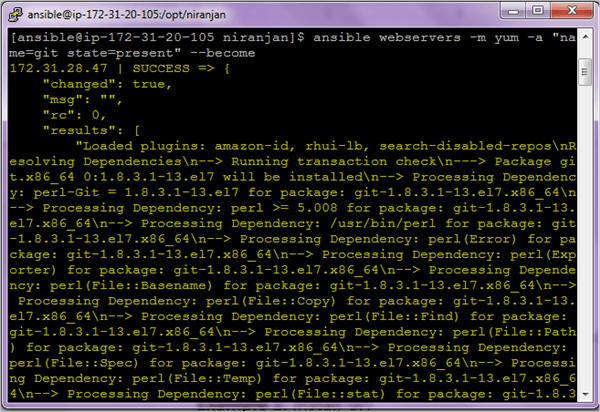 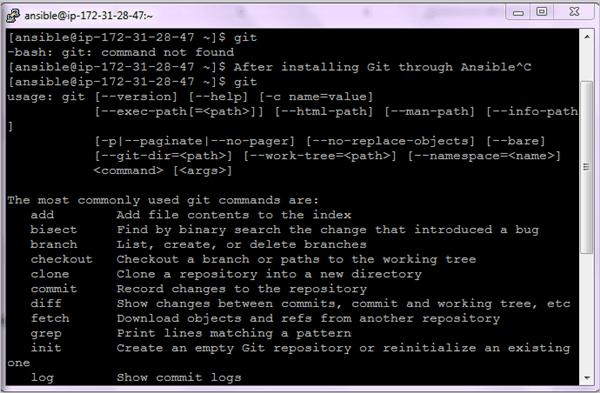 In this command, state=present will check if the package is installed or not and if not installed it will install the latest version.

Example 2: Check if the package is installed & update it to the latest version.

In the above command, state=latest will update the package to the latest version only.

Example 4: Check if Maven is installed or not.

To manage services with ansible, we use a module ‘service’. 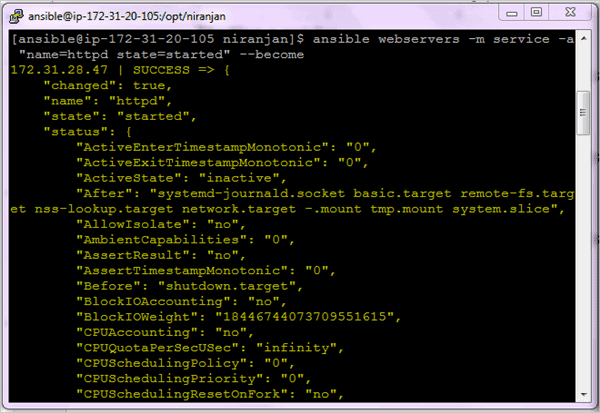 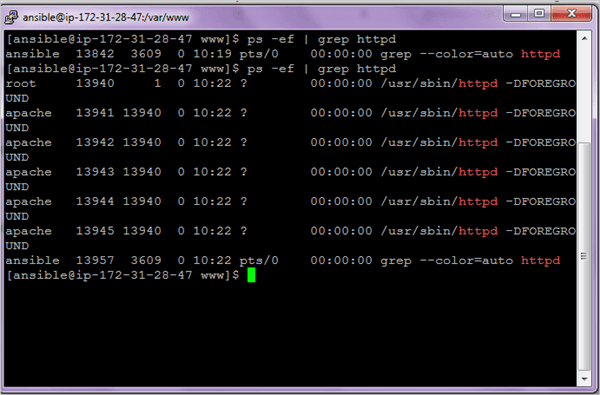 In this tutorial, I introduced you to the basic concepts and components of Ansible and we also have seen more about installation, configuration, and usage of Ansible with the help of Ansible modules which is the main component in Ansible execution.

In our upcoming tutorial, we will focus on the very important aspect of writing playbooks for task automation and Ansible vaults to keep sensitive data in encrypted files.