This tutorial will Discuss the Differences between Gradle vs Maven. You will also learn about Various Maven Plugins and Configurations:

Like Maven, Gradle is an automation tool used by Java developers for a build. Gradle is an open-source tool and utilizes a language that is specific to the domain and is developed in Groovy. 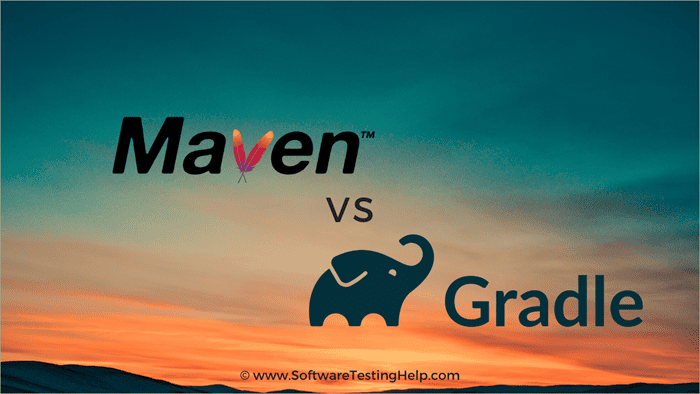 The key differences between Gradle and Maven are tabularized below:

Gradle is constructed of a group of tasks that need to be performed. While Maven has a constant and precise model of phases. Maven goals are linked to the phases of the project and each goal is similar to the Gradle tasks.

As far as performance is concerned, both Gradle and Maven can run more than one builds on different modules in parallel.

However, Gradle follows an incremental build approach and verifies if the tasks are modified or not and deals only with the files that are getting updated.

Gradle has better performance because of the features listed below:

Gradle is used by Google as a build tool for Android because it is designed in such a way that it can be expanded with the most basic methodologies. Gradle’s model can be utilized for the development of C or C++ and can be extended to any other environment.

Maven cannot be easily customized and is not often feasible. This makes it easier to comprehend Maven builds if we don’t have to deal with any complex or exclusive requirements. However, Gradle is easily customizable for use.

Gradle gives an interesting interactive web UI for coding, debugging, and build optimization tasks in the Build Scan. It provides important information on the trends, history, and other parameters on the build.

Gradle has better APIs and dependencies implementation than Maven. Besides, it allows for coincident caches. This means that multiple projects can utilize the common cache without getting overwritten by each other. Gradle has checksum and synchronizes caches along with the repositories.

It has some of the dependency management characteristics like:

Both Gradle and Maven have dynamic and transitive dependencies. Maven has the Local, Central, and Remote repositories while Gradle has JCenter. Also, there are customized repositories internal to the organizations.

Coding Examples Of Gradle And Maven

In order to execute a Maven goal that generates a jar file, the following Maven command is used:

Thus we see that the pom.xml file is descriptive and Maven projects with multiple tasks, configurations, and dependencies will have lengthy xml file.

The corresponding build.gradle code performing the same result is given below:

Thus we see that the Gradle script is shorter when compared to Maven. The below command is used to execute a group of tasks.

We see that Gradle is more capable than Maven. But there may be occasions when we don’t require all these additional functionalities of Gradle. So Maven is more suited for small projects while Gradle is mostly used in bigger projects.

The following table lists down some basic commands of Gradle vs Maven:

We can convert Gradle to Maven and the other way round.

We can follow the below steps in order to change Maven to Gradle:

#1) Navigate to the Maven project folder (location of pom.xml file).

This will result in generating a Gradle build simultaneously settings.gradle file and build.gradle files will be created.

To change Gradle to Maven we follow the below steps in order:

#1) build.gradle file should have the Maven plugin.

#2) build.gradle file should have the following block of code:

This will result in generating pom-default.xml files inside the pom subfolder.

Maven configuration information for usage and projects built remain in the following places:

Configuration of Maven is done at the levels listed below:

The local repository location can be changed as a part of the configuration of the user. By default, the location is .m2 directory. This is achieved by the below xml code.

The proxy configuration can be maintained in the settings.

Maven downloads a maximum of 5 artifacts from various groups at one go.

In order to download two artifacts, we need to specify the following command:

<distributionManagement> section describes the repositories to be deployed in a specific project. Information like username, password, and other security parameters cannot be placed inside that project. In order to provide this information, we need to add them in <server> mapped to the id of the deployment repository inside the project.

This is achieved by the below xml code.

Maven repository can be configured to put into the profile. At a time, there can be more than one profile. Depending on the requirement, we can keep one active profile so that we can switch to various environments.

In order to have an environment-specific configuration that is not specific to each project, we need to configure the settings.

Maven contains a settings file that is present at the installation or user home directory. It takes care of the configuration of some of the environmental parameters as shown below:

Till Maven 2.1.0+, we have the option of encryption of the passwords inside the settings file. But we must construct a master password before going for encryption.

Maven plugins are an integral part of the Maven framework. Each plugin is assigned to a particular task.

There are two types of plugins as shown below:

The below list shows some of the Maven core plugins:

Some of the Maven Reporting plugins are listed below:

Q #1) Is Maven better than Gradle?

Answer: Gradle uses an incremental and work avoidance approach. Gradle monitors the input and output tasks and executes those that are required. However, for smaller projects Maven is still preferred while Gradle is suited for bigger and complex projects.

Q #2) Why is Gradle faster than Maven?

Answer: Gradle is a lot faster than Maven because of the below approaches of Gradle.

Answer: Gradle is an automation build tool that is developed on the features of Apache Ant and Apache Maven. It is open-source and works on Groovy-based domain-related language. It is not driven by pom.xml file as used by Maven for the project dependencies and configurations.

Maven is preferred because of the following advantages:

Answer: Maven is a project management and build tool generally used for Java projects. However it can be used for projects developed in Ruby, C#, Scala, and so on.

Answer: Eclipse IDE automatically downloads the dependencies and configurations from the Maven repositories. Also, creating new Maven projects, support to existing Maven Project and pom .xml can be done with the help of Eclipse.

Q #7) What language is Gradle?

Answer: Gradle gives a domain-related language also called DSL for the build. This language is obtainable in Groovy and Kotlin.

Q #8) What are the advantages of Maven?

This tutorial discussed the concepts like Gradle vs Maven, how to convert Gradle to Maven, and vice versa, Maven configurations, and plugins. Also, some of the basic commands on Maven and Gradle were explored.

Maven being a hot topic in the market, it is necessary to develop an understanding of the subject and develop expertise on this tool.