An in-depth look at Ansible Roles, Integration with Jenkins, and Ansible S3 and EC2 modules:

In part 2 of the series on Ansible tutorials, we learned how Ans1ible playbooks are used to execute multiple tasks and get all the target machines or servers to a particular desired state.

Ansible playbooks are primarily YAML files which contain multiple tasks in one single huge file which is not modular and reusable. But if you need to break up your entire configuration and be more modular and reusable then Ansible roles will help a lot. 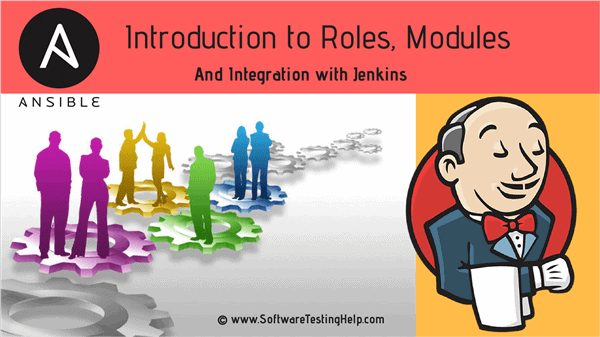 With Ansible roles you can group your variables, tasks, handlers etc., which increase reusability and most certainly reduce syntax errors. It helps to de-clutter the whole code.

Ansible roles are similar to modules in Puppet and cookbooks in Chef.

In order to create roles, you use the ansible-galaxy command which has all the templates to create it.

I have been a DevOps specialist for most of my life and have been working only in CI and CD.

So for Example in Continuous Delivery where I am deploying a new build of my J2EE application (WAR file) to tomcat my steps would be as follows:

So I would be creating a role with at least 4 tasks and one main file calling it. This way I am making my code more modular and reusable. So let’s call this role as tomcat and create it.

Once the role is created you can see the directory structure which it has created.

The main components we will use in this section include:

Edit the tasks/main.yml file and add the below code. As per the example scenario mentioned above, we are defining 4 different tasks. In most cases, the deploy application will also start the application so the last one of the starting application may not be required.

Step 2: Create all the 4 files as per the scenario

In the below tasks action: ec2_facts is used to get facts from remote EC2 instances and call them in plays/tasks

In the deploy code if JENKINS is used to build the WAR file then you need to provide the source directory of the WAR file in the copy module and the destination is the target server webapps location of tomcat.

Edit the vars/main.yml file and add the code as shown below.

Edit the meta/main.yml file and add your information like author, description, and company.

Lastly, create the main site.yml file to call the role created which in turn will help to deploy the application to the servers or a list of hosts as per the inventory file. Create the file as /etc/ansible/site.yml 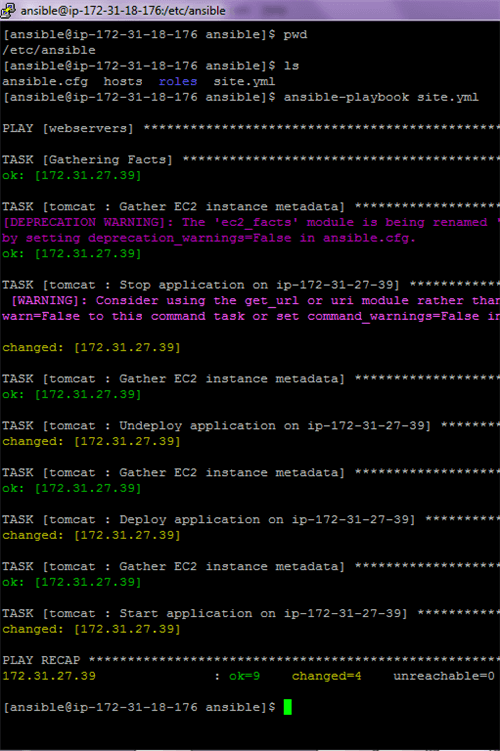 Launch the Tomcat URL to see if the application has been deployed and started. 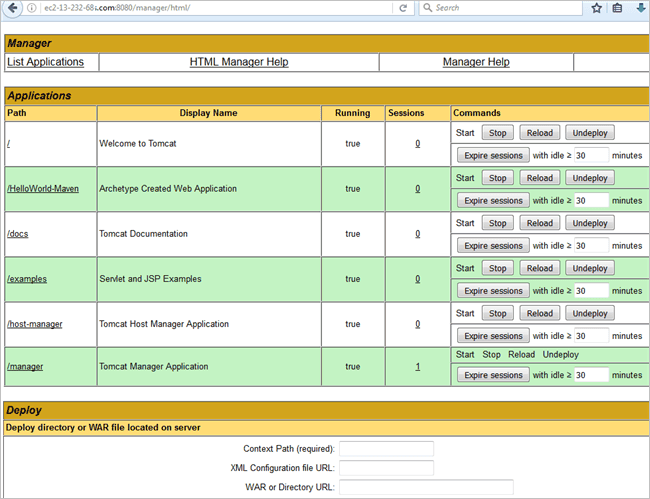 In this section, we will see how Jenkins can be integrated with Ansible. The WAR file built using the build process will be used to deploy to Tomcat on the target machine using Ansible. We will be calling the Ansible role created in the previous section in Jenkins using the Ansible plugin.

So once the build is done the deployment of WAR file will be automatically triggered using Ansible.

I am keeping this simple and have not configured Sonar or Artifactory or Junit during the continuous integration activities which can also be done.

Step 1: Create a Jenkins job and configure the SCM repo using the code in GitHub 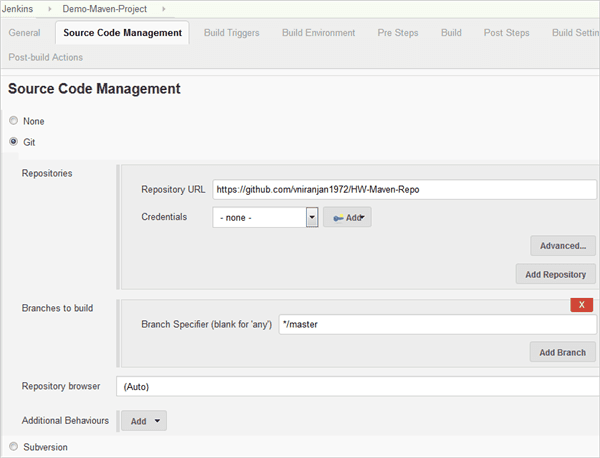 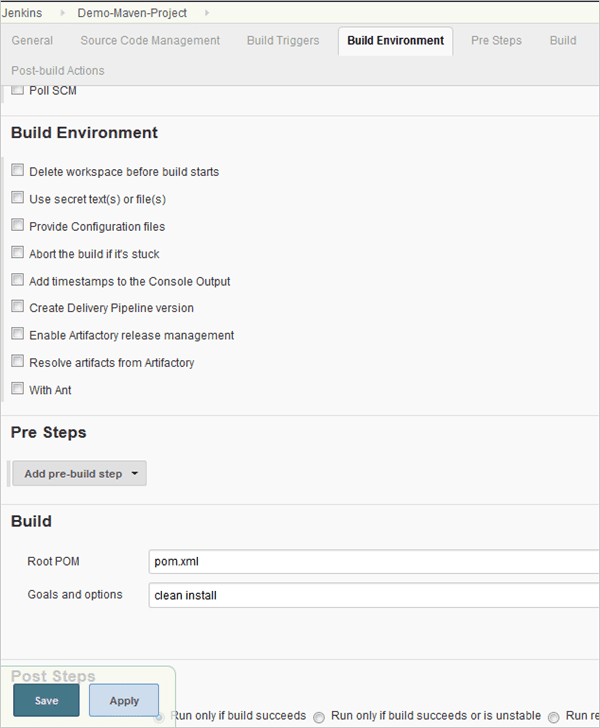 Step 4: Create the tomcat role in the Jenkins workspace location using the command shown below

Follow the procedure as in the previous section to create all the files for tasks, vars, meta and the main site.yml.

Step 5: Configure the Jenkins post-build step to invoke the Ansible playbook and call the site.yml file. Save the job. 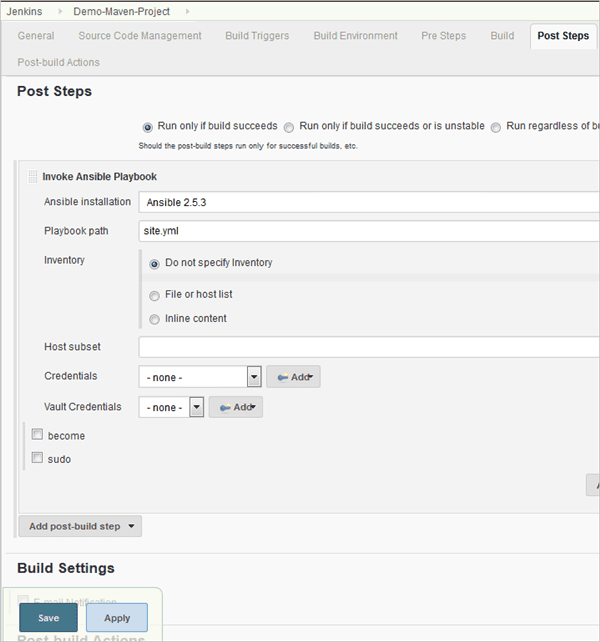 Step 6: Trigger the build job and launch the Tomcat URL to verify if the application is deployed correctly. 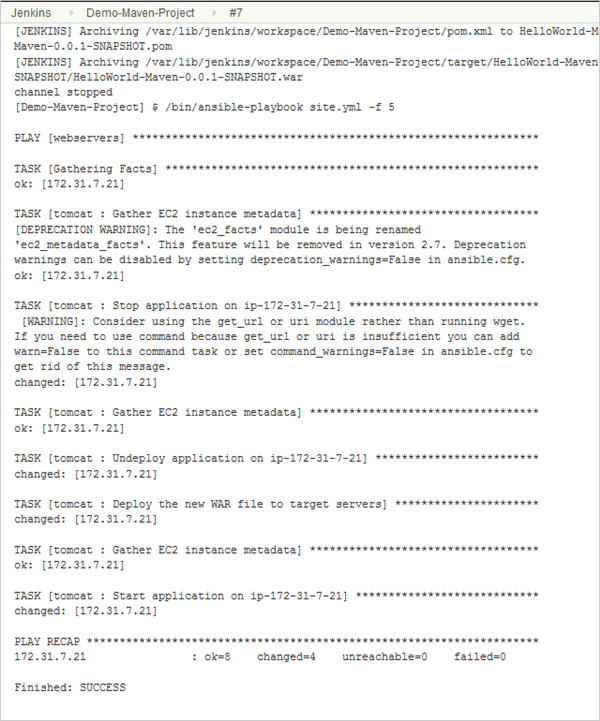 Ansible S3 module can be used to get or put a file to or from an S3 bucket. To use this module we will need to install and configure boto module of python which acts as an API(Application program interface) to access AWS. This has to be installed on the Ansible control machine.

Once the above is done install boto

If not able to install then you will need to enable EPEL repo. The procedure can be found in part 1 of the article series in the installing ansible section.

Once the above is done we also have to provide AWS user credentials. You can export the AWS Access and Secret Key environment variables

If in case even after setting the above environment variables you get an error as the credentials not found then you may also specify the same in the playbook.

Let’s now look at some examples of how to use Ansible with S3 buckets and later on to create and terminate instances.

Example 1: Create an empty bucket with a folder

Note: Here the mode is created for creating bucket and Permission can be public-read or public-read-write

Run the playbook and view the bucket created with the development folder within it. 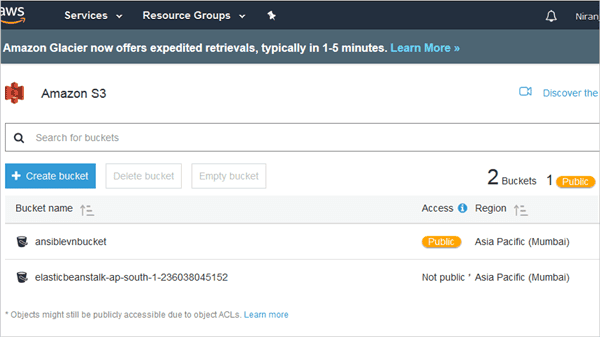 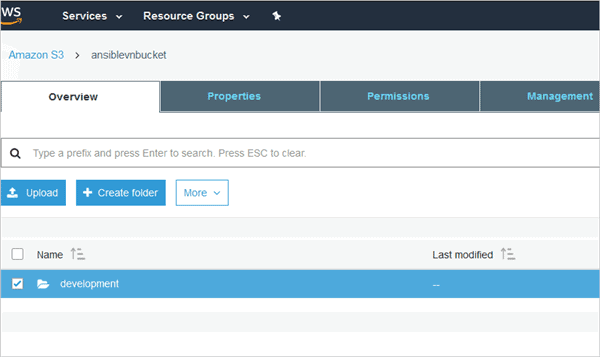 Example 2: To copy (upload) a file to S3 bucket

Here the object is the file created within the bucket. It can be a file or folder. In this case, it is a file. The source is the file that is picked up from the local machine which is the Ansible control machine.

Note: Here the mode is put for uploading object

Run the playbook and look at the S3 bucket. 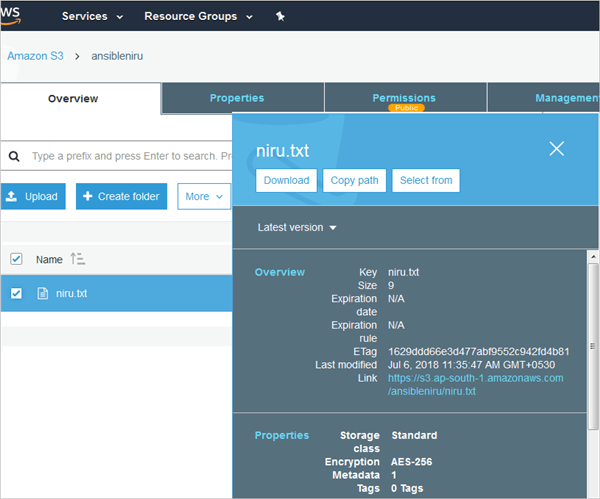 Note: Here the mode is get for download object

Example 4: Delete an object or file from S3 bucket

Note: Here the mode is delobj for delete object

Example 5: Delete a bucket and all contents

Note: Here the mode is delete for the delete bucket

Lastly, I will leave you with one of the most important features of Ansible which is to create or spin up an AWS EC2 instance and also how to terminate the instance. Of course, do not forget to install boto which is a pre-requisite and also ensure to export the user “AWS_ACCESS_KEY_ID” and “AWS_SECRET_ACCESS_KEY”.

In case the export does not work ensure to add the same in the code as shown below.

The code below will show you how to create an EC2 instance along with creating a security group and key pair.

I am assuming that the users doing this exercise are well versed with the AWS EC2 concepts.

Add the below code to a file and run the same to verify the EC2 instance creation in the AWS console. As the code is big, it is split into 2 pages but ensure you save all to a single yml file. 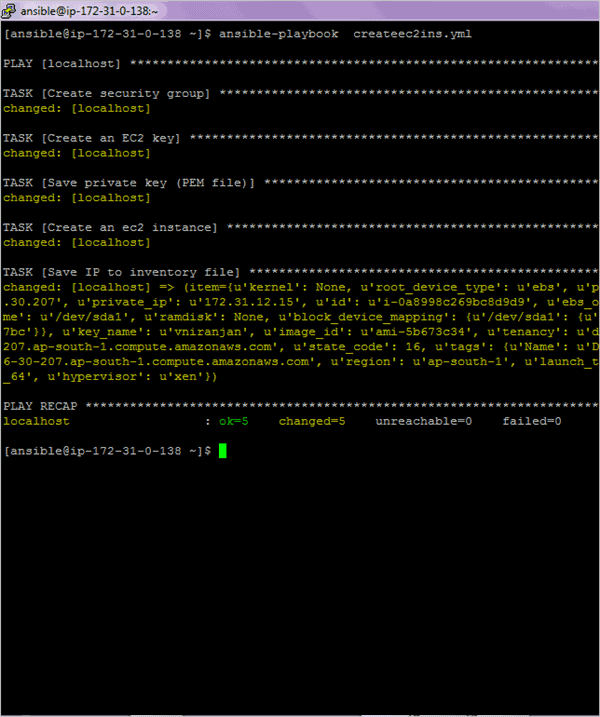 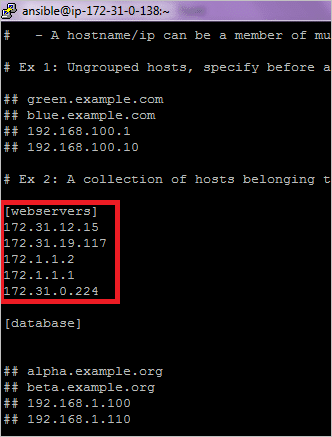 Login to the instance

(Note: Click on the below image for an enlarged view) 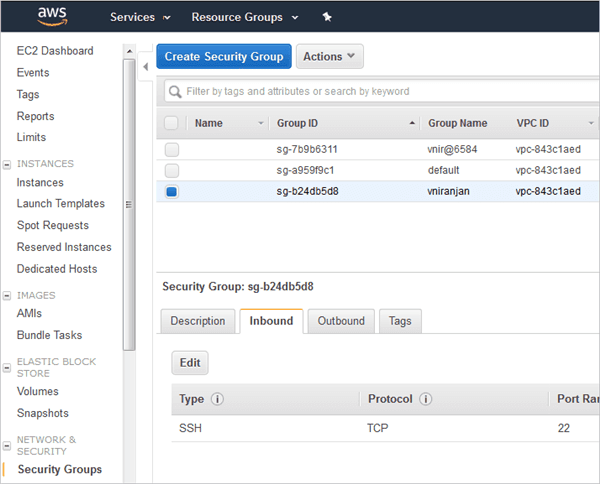 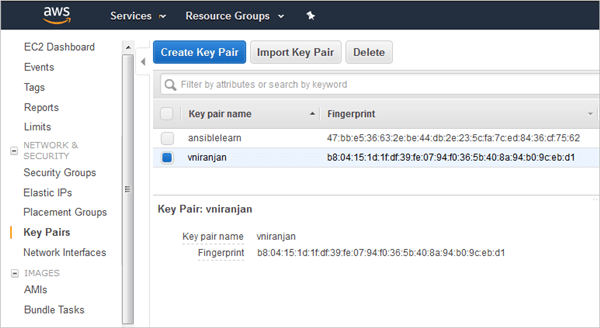 In this section let’s know more about terminating EC2 instances.

Playbook to terminate both the EC2 instances

Today, most of the IT organizations are looking at some kind of differentiators to win business and showcase the same to their clients. I would say automation is definitely one of the key differentiators.

With tools like Ansible, I am of the opinion that you should be able to automate most of the repetitive manual tasks.

Thus what we have learned from this 3-part Ansible Tutorial series showcases Ansible as a very popular and powerful configuration management tool which helps in different areas of automation ranging from task automation, application deployment, and cloud provisioning. Thereby, we are primarily talking about IT orchestration.

Hope you enjoyed the range of Ansible tutorials and I’m sure that you would have gained immense knowledge on the concept by now.

Next, we will learn how to Integrate Jenkins with Selenium which is also a part of our DevOps training series.