Do you know the difference between Client-Server Testing and Web-Based Testing and what are the things that we need to test in such applications?

This tutorial will give you the answers to the above questions in detail along with simple examples for your easy understanding.

Projects are broadly divided into two types of: 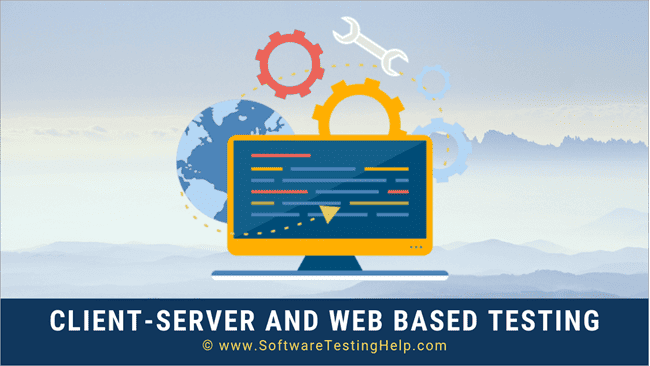 This type of testing is usually done for 2 tier applications (usually developed for LAN). We will be having Front-end and Backend here.

Applications launched on the front-end will have forms and reports which will be monitoring and manipulating data.

The tests performed on these types of applications would be:

This is done for 3 tier applications (developed for Internet / intranet / xtranet). Here we will be having Browser, web server and DB server.

The applications accessible in the browser would be developed in HTML, DHTML, XML, JavaScript, etc. (We can monitor through these applications).

Applications for the webserver would be developed in Java, ASP, JSP, VBScript, JavaScript, Perl, Cold Fusion, PHP, etc. (All the manipulations are done on the webserver with the help of these programs developed)

The DB server would have Oracle, SQL Server, Sybase, MySQL, etc. (All data is stored in the database available on the DB server).

The tests performed on these types of applications would be:

The types of tests that can be applied to these types of applications, are

The tests performed on these applications would be

Enlisted below are some more points to clarify the difference between Client-Server, Web and Desktop applications.

As per the difference in both, the applications come from where and how to access the resources. In Client-Server, once the connection is made, it will be in the state on connected, whereas in case the web testing HTTP protocol is stateless, then there comes logic of cookies, which is not in Client-Server.

For Client-Server application, users are well known, whereas for web application any user can log in and access the content, he/she will use it as per his intentions.

So, there are always issues of security and compatibility for a Web Application.

Over to you: On which application are you working on? Desktop, Client-Server or Web Application? What is your experience while testing these applications?

136 thoughts on “What is Client-Server and Web Based Testing: How to Test these Applications?”