This is the 6th QTP Tutorial in our QTP training series. As a reminder, we have started the QTP online training article series and we’ll be covering almost all QTP tutorials with simple examples to understand the concept.

The last few QTP tutorials have been about the QTP’s Keyword view which was really crucial in getting a high-level understanding of a QTP test’s structure and also introduced us to few ways in which our tests can be tailored to meet our needs.  So I think we are ready to record our first test in its entirety. 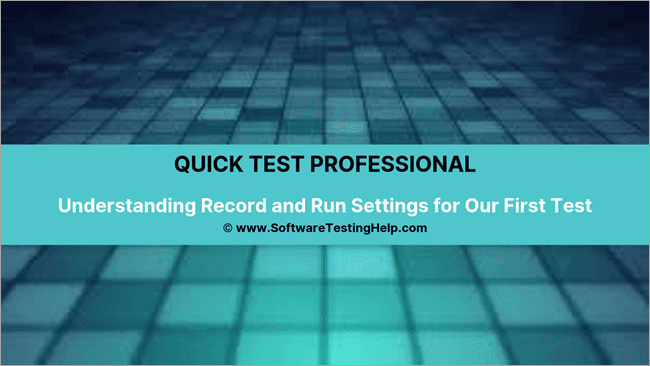 We are going to do just that in the next few QTP training articles. Today’s topic, therefore, is the first step in doing so which is the “Record and Run settings’. We are going to understand all about this, why it is important and how this can affect a test.

When QTP is launched and we choose to record a new test, the ‘record and run settings’ dialog opens up. Alternately a user can choose to access this window by choosing the “Automation->Record and Run Settings” option from the menu. So far in our examples, we have just continued with its default settings but now we will explore it further. The following is how this dialog looks: 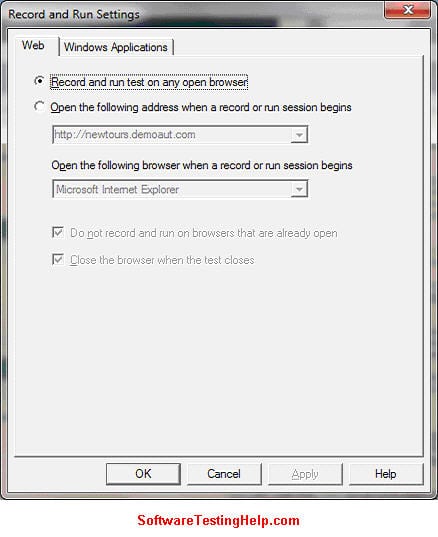 As the same suggests, this is a space that QTP provides the user to set certain parameters that help the user to create a test via record and to execute the same during a run session.

QTP can record and run a test on either a windows app or a web app. The web tab is available only when the Web add-in is selected to be loaded at startup. This tab is used for Web, .NET Web Forms, PeopleSoft, and Web-based SAP objects.

So there are 2 tabs to define the settings separately for each of these environments. There will be a separate ‘Siebel’ tab available is a Siebel add-in is installed and loaded during startup.

The default settings are as shown in the picture above. This setting means that when a record session has started the target of the record operation can be any of the web application that is already open in a browser.

The user also has an instruct QTP to ignore certain web pages like QC or any other page with a specific URL or a specific title. The way he can do that is, “Tools->Options->Web” and define those pages in the following QTP dialog: 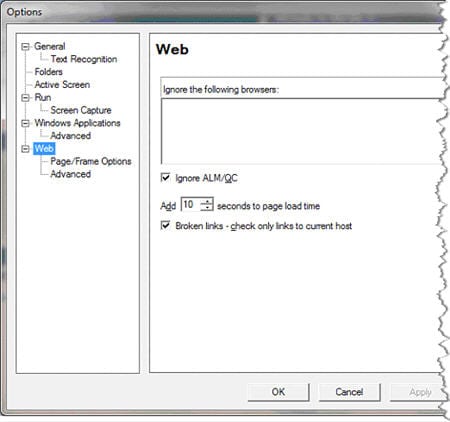 But if the user chooses, the next option “Open the following address when a record or run session begins” the corresponding elements in the screen get enabled. Take a look at it below:

The user can enter the address of any page and the choice of the browser.  The browsers that QTP 11 supports are: 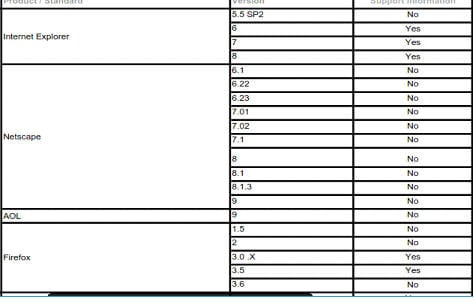 The browsers that are supported and are currently installed in your machine will only appear on the list.

There is another way to set the record and run settings other than from this window and that method is through Environment variables. Since we did not yet get there, we will discuss them in detail later on.

For the sake of mentioning, if the environment variables URL_env and Browser_env are set, then it overrides the URL and browser chosen in the ‘Record and Run Setting’ window. How to create these and how they work – all this will be dealt with later.

‘Do not record and run on browsers that are already open ‘– If this option is chosen all the browsers that are open prior to recording and running and also prior to launching QTP will be ignored. It is as if these browsers don’t exist for QTP because the user can not even spy these pages to view the objects. In other words, these browsers are totally ignored and as a result, deemed inaccessible to QTP.

This tab is for the windows based applications. The default option to record and run on any windows app opened. 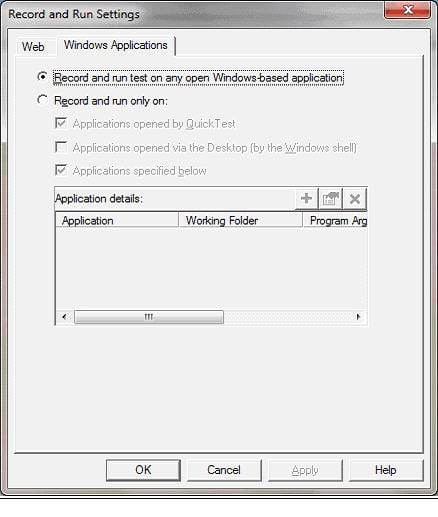 If the “Record and Run only on’ option are chosen, the other options under it get activated. 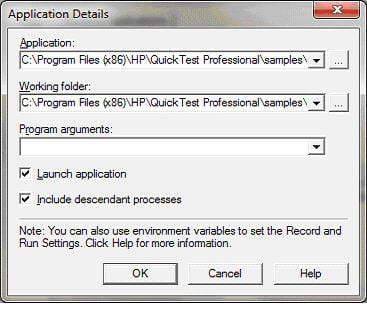 As you can see from the above window, the path of an application and its folder should be added and QTP opens that particular app while record and/or run.

That concludes a quick introduction to various ‘record and run settings’ that can be used for a QTP test. When testing a web app, it is also important to make sure that we add the correct settings in the windows application tab too.

It is crucial because it will help us in preventing the opening up of unnecessary applications and also to make sure that we do not accidentally change any of the already open windows applications. It should be noted that the setting in the windows tab does not directly affect the testing performed on a web app.

So the recommended settings for the windows tab while testing a web app are: 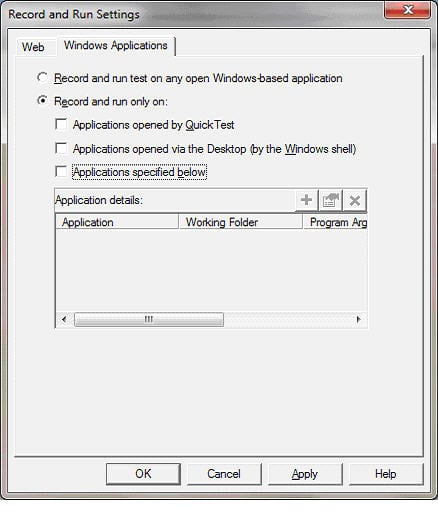 Once these settings are done, the test recording begins. Any operation performed on the test gets recorded in the QTP. The tester can stop the record operation once all the steps that he wished to perform on the AUT are done by clicking on the “STOP” option available in the QTP menu.

The recorded steps can then be re-performed on the AUT by choosing the ‘RUN’ option from QTP. Run operation too invokes the application (web or windows) depending on the setting specified.

To do so, QTP provides some checkpoints and the tester can also programmatically add steps to check a few things as needed.

We will discuss these checkpoints in the coming series of articles and also try to learn the best practices to be followed while test creation to ensure maximum efficiency.

Feel free to post your QTP questions on this or previously covered QTP tutorials in the below comments. If you have any suggestions for improving these tutorials please contact us.