In our previous tutorial we discussed about Artificial Neural Network which is an architecture of a large number of interconnected elements called neurons.

These neurons process the input received to give the desired output. The nodes or neurons are linked by inputs, connection weights, and activation functions.

The main characteristic of a neural network is its ability to learn. The neural networks train themselves with known examples. Once the network gets trained, it can be used for solving the unknown values of the problem. 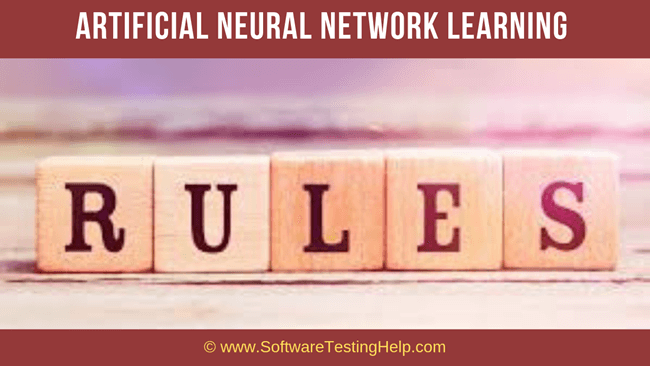 The Neural Network learns through various learning schemes that are categorized as supervised or unsupervised learning.

In supervised learning algorithms, the target values are known to the network. It tries to reduce the error between the desired output (target) and the actual output for optimal performance. In unsupervised learning algorithms, the target values are unknown and the network learns by itself by identifying the hidden patterns in the input by forming clusters, etc.

An ANN consists of 3 parts i.e. input, hidden layer, and output layer. There is a single input layer and output layer while there may be no hidden layer or 1 or more hidden layers that may be present in the network. Based on this structure the ANN is classified into a single layer, multilayer, feed-forward, or recurrent networks.

Before we classify the various learning rules in ANN, let us understand some important terminologies related to ANN.

#1) Weights: In an ANN, each neuron is connected to the other neurons through connection links. These links carry a weight. The weight has information about the input signal to the neuron. The weights and input signal are used to get an output. The weights can be denoted in a matrix form that is also called a Connection matrix.

Each neuron is connected to every other neuron of the next layer through connection weights. Hence, if there are “n” nodes and each node has “m” weights, then the weight matrix will be:

#2) Bias: The bias is added to the network by adding an input element x (b) = 1 into the input vector. The bias also carries a weight denoted by w (b).

The bias plays an important role in calculating the output of the neuron. The bias can either be positive or negative. A positive bias increases the net input weight while the negative bias reduces the net input. 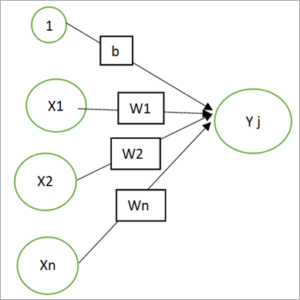 The threshold value is:

#4) Learning Rate: It is denoted by alpha ?. The learning rate ranges from 0 to 1. It is used for weight adjustment during the learning process of NN.

#5) Momentum Factor: It is added for faster convergence of results. The momentum factor is added to the weight and is generally used in backpropagation networks.

The classification of various learning types of ANN is shown below.

The adjustment of weights depends on the error gradient E in this learning. The backpropagation rule is an example of this type of learning. Thus the weight adjustment is defined as

In this learning, the weights are adjusted in a probabilistic fashion.

This learning was proposed by Hebb in 1949. It is based on correlative adjustment of weights. The input and output patterns pairs are associated with a weight matrix, W.

The transpose of the output is taken for weight adjustment.

It is a winner takes all strategy. In this type of learning, when an input pattern is sent to the network, all the neurons in the layer compete and only the winning neurons have weight adjustments.

Also known as M-P Neuron, this is the earliest neural network that was discovered in 1943. In this model, the neurons are connected by connection weights, and the activation function is used in binary. The threshold is used to determine whether the neuron will fire or not.

The function of the M-P neuron is:

Hebb Network was stated by Donald Hebb in 1949. According to Hebb’s rule, the weights are found to increase proportionately to the product of input and output. It means that in a Hebb network if two neurons are interconnected then the weights associated with these neurons can be increased by changes in the synaptic gap.

This network is suitable for bipolar data. The Hebbian learning rule is generally applied to logic gates.

The weights are updated as:

The training steps of the algorithm are as follows:

X1 and X2 are inputs, b is the bias taken as 1, the target value is the output of logical AND operation over inputs.

#1) Initially, the weights are set to zero and bias is also set as zero.

The new weights will be:

#3) The above weights are the final new weights. When the second input is passed, these become the initial weights.

#5) Similarly, the other inputs and weights are calculated.

The table below shows all the input:

Hebb Net for AND Function 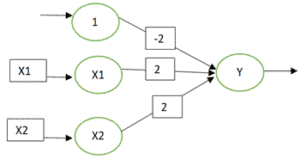 The activation function is:

The weight updation takes place between the hidden layer and the output layer to match the target output. The error is calculated based on the actual output and the desired output.

If the output matches the target then no weight updation takes place. The weights are initially set to 0 or 1 and adjusted successively till an optimal solution is found.

The weights in the network can be set to any values initially. The Perceptron learning will converge to weight vector that gives correct output for all input training pattern and this learning happens in a finite number of steps.

The Perceptron rule can be used for both binary and bipolar inputs.

#1) Let there be “n” training input vectors and x (n) and t (n) are associated with the target values.

#2) Initialize the weights and bias. Set them to zero for easy calculation.

#5) To calculate the output of the network:

#6) The activation function is applied over the net input to obtain an output.

#7) Now based on the output, compare the desired target value (t) and the actual output.

#8) Continue the iteration until there is no weight change. Stop once this condition is achieved.

#1) Let there be “n” training input vectors and x (n) and t (n) are associated with the target values.

#2) Initialize the weights and bias. Set them to zero for easy calculation.

#5) To calculate the output of each output vector from j= 1 to m, the net input is:

#6) The activation function is applied over the net input to obtain an output.

#7) Now based on the output, compare the desired target value (t) and the actual output and make weight adjustments.

w is the weight vector of the connection links between ith input and jth output neuron and t is the target output for the output unit j.

#8) Continue the iteration until there is no weight change. Stop once this condition is achieved.

Implementation of AND function using a Perceptron network for bipolar inputs and output.

The input pattern will be x1, x2 and bias b. Let the initial weights be 0 and bias be 0. The threshold is set to zero and the learning rate is 1.

As threshold is zero therefore:

y = 0 but t= 1 which means that these are not same, hence weight updation takes place.

The new weights are 1, 1, and 1 after the first input vector is presented.

Similarly, by continuing with the next set of inputs, we get the following table:

The EPOCHS are the cycle of input patterns fed to the system until there is no weight change required and the iteration stops.

This rule is followed by ADALINE (Adaptive Linear Neural Networks) and MADALINE. Unlike Perceptron, the iterations of Adaline networks do not stop, but it converges by reducing the least mean square error. MADALINE is a network of more than one ADALINE.

The motive of the delta learning rule is to minimize the error between the output and the target vector.

The weights in ADALINE networks are updated by:

In this tutorial, we have discussed the two algorithms i.e. Hebbian Learning Rule and Perceptron Learning Rule. The Hebbian rule is based on the rule that the weight vector increases proportionally to the input and learning signal i.e. the output. The weights are incremented by adding the product of the input and output to the old weight.

The application of Hebb rules lies in pattern association, classification and categorization problems.

The Perceptron learning rule can be applied to both single output and multiple output classes’ network. The goal of the perceptron network is to classify the input pattern into a particular member class. The input neurons and the output neuron are connected through links having weights.

The weights are adjusted to match the actual output with the target value. The learning rate is set from 0 to 1 and it determines the scalability of weights.

The weights are updated according to:

Apart from these learning rules, machine learning algorithms learn through many other methods i.e. Supervised, Unsupervised, Reinforcement. Some of the other common ML algorithms are Back Propagation, ART, Kohonen Self Organizing Maps, etc.

We hope you enjoyed all the tutorials from this Machine Learning Series!!