In the Previous tutorial about Neural Network Learning Rules, we learned the Hebbian Learning and Perceptron Learning Algorithm with examples.

In supervised learning, the desired output which is often called the target value of the network is known to the neural network. It optimizes its performance to reduce the error between the actual output and target.

On the other hand, an unsupervised type of learning does not have any information about the target value. It tries to optimize its performance on its own by identifying the hidden pattern trends in inputs by forming clusters. 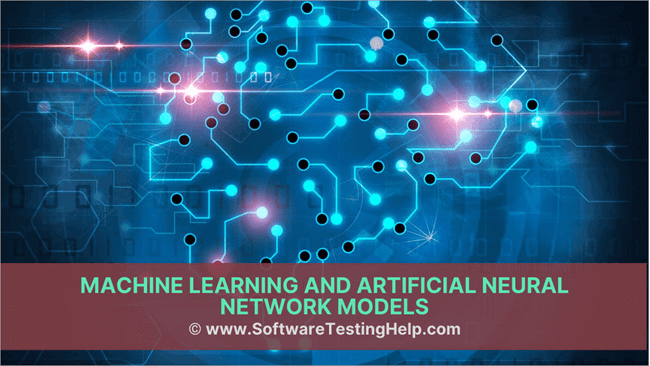 Let’s take a quick look at the structure of the Artificial Neural Network.

ANN has 3 layers i.e. Input layer, Hidden layer, and Output layer. Each ANN has a single input and output but may also have none, one or many hidden layers. The structure of ANN classifies into many types of architecture such as a Single layer, Multi-layer, Feed-forward, and Recurrent networks.

There are weights associated with each input neuron in Artificial Neural Network, bias which also carries weight. An activation function is applied over the net input to calculate the output. The output is then compared to the target and weights are adjusted.

The activation functions are of many types such as Binary step function, Bipolar step, Sigmoidal function, etc.

The above terms are described in the diagram below:

In this tutorial, we will focus on the Artificial Neural Network Models – Multi Perceptron, Radial Bias and Kohonen Self Organising Maps in detail.

What Is A Multilayer Perceptron?

Due to the added layers, MLP networks extend the limitation of limited information processing of simple Perceptron Networks and are highly flexible in approximation ability. The MLP networks are trained and the weights are updated using the backpropagation learning method which is explained below in detail.

Some limitations of a simple Perceptron network like an XOR problem that could not be solved using Single Layer Perceptron can be done with MLP networks.

A Backpropagation (BP) Network is an application of a feed-forward multilayer perceptron network with each layer having differentiable activation functions.

For a given training set, the weights of the layer in a Backpropagation network are adjusted by the activation functions to classify the input patterns. The weight update in BPN takes place in the same way in which the gradient descent method is applied to the single perceptron networks.

In this algorithm, the error between the actual output and target is propagated back to the hidden unit. For minimizing the error, the weights are updated. To update the weights the error is calculated at the output layer.

With a greater number of hidden layers, the network becomes more complex and slower, but it is more beneficial. The system can be trained with one hidden layer as well. Once trained it will start producing the output rapidly.

Backpropagation Learning is done in 3 stages: 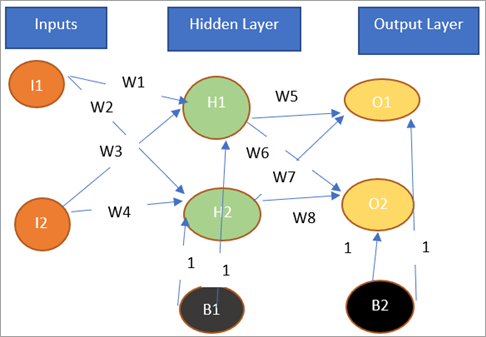 A backpropagation network is a feed-forward multilayer network. It has an input layer, a hidden layer, and an output layer. The biases are added to the network at the hidden layer and the output layer with activation function=1. The inputs and outputs to the BPN can either be binary (0,1) or bipolar (-1,+1).

The activation function is differentiable, monotonic & incremental and is generally chosen between binary sigmoidal or bipolar sigmoidal. 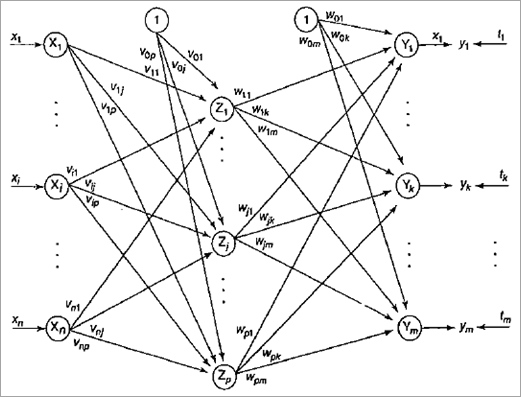 Training Process Of Back Propagation Algorithm

From the above image, 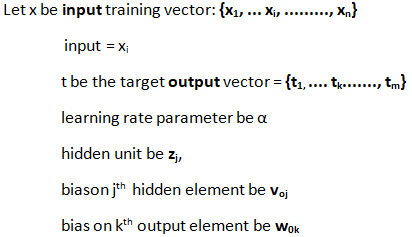 Step2: The input unit receives xi as input and sends it to the hidden unit.

Step 3: The net input of the hidden layer unit zj is calculated as

Step 4: Net Output of the hidden layer is calculated as zj= f (zinput), the activation function is taken as binary or bipolar sigmoidal.

Step 5: The net input of the output layer is calculated as zj= f (zinput).

Step 6: The net output of the output layer: f(yinput), the activation function is taken as binary or bipolar sigmoidal.

where output unit yk(k=1 to m) receives the target pattern corresponding to the input training pattern.

Find out the derivative of the function.

The error is sent backward.

Step 9: The output units are updated: (yk, k=1 to m) updates the bias and weights:

Step 10: Check for the stopping condition that is given as the number of epochs completed.

The steps 2 to 9 are repeated until the stopping condition is obtained.

Some of the factors that affect the training of Backpropagation networks are:

Example of a Back-propagation Network

For the following network diagram, let’s calculate the new weights with the given figures: 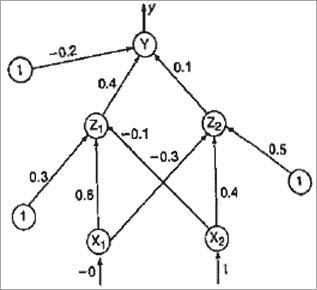 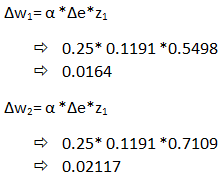 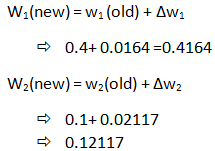 *Assumption: The error between the input and hidden layer vectors is taken as 0.

It is defined as: 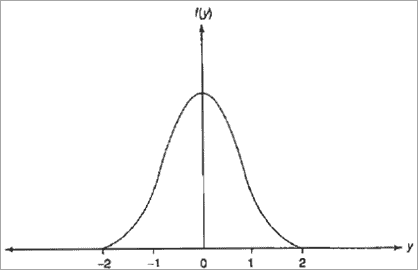 The architecture of the Radial Bias function is given below. 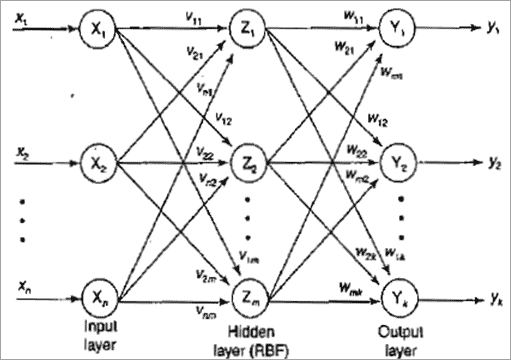 Step 1: Set the weights to some random initial values.

Step 4: Select an adequate number of centers from the input vectors.

Step 5: The output from the hidden unit is calculated as

Where x^ji is the center of the radial bias function unit for input vectors,

is the width of the ith RBF unity and xji is the jth variable of the input vector pattern.

Step 6: The output is calculated as:

k is the number of hidden layer nodes.
ynet is the output value of the mth node in the output layer for the nth incoming pattern.
wo is the biasing term at the nth output node.

Step 7: Calculate the error and check for the stopping conditions such as the number of epochs, etc.

Feature Maps is a method in which multi-dimensional inputs are converted into one or two-dimensional array i.e. it converts a vast array space into a feature space while maintaining the properties of the input features.

For Example, there is an output cluster of m units arranged in a 1D or 2D array and the input signal of n units. The given output pattern is taken as a reference for the input pattern. Thus, when self-organization is done, the input vector unit which matches closely with the weight vector cluster unit is chosen as the winner. 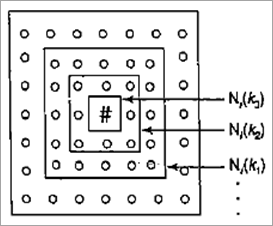 To find the closest input unit, the weight vector is calculated using the Euclidean distance formula.

A Rectangular Grid of clusters is shown above. The N(k1), N(k2), N(k3) are radii where k1>k2>k3.The winning unit is denoted by “#” and the other output units are denoted by “o”. Each unit has eight nearest neighbors.

The architecture of Kohonen Self Organising Maps is shown below: 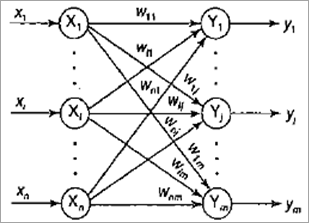 The weight Updation takes place on the winning neuron unit which is calculated using Euclidean Distance or Dot Product method. The network is trained until the number of epochs is found or when the learning rate reduces to a very small value.

. It can be chosen as a sample range of input values.

Step 2: Calculate the square of the Euclidean Distance for each input vector x.

Step 3: The winning unit will be the one with the minimum value of D(j).

Step 6: Reduce the radius of the topological neighborhood at specific intervals.

Step 7: Repeat steps 2-6 until the stopping condition is received.

Example of Kohonen Self Organising Maps

For given input vectors, construct a Kohonen Self Organising Maps 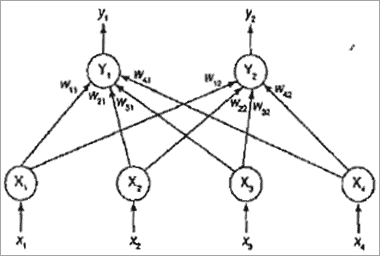 Step 1: Initialise the weights between 0 and 1. 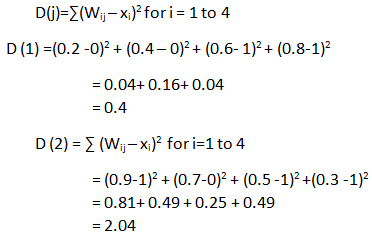 Step 3: Updating the weights on the winning cluster unit. 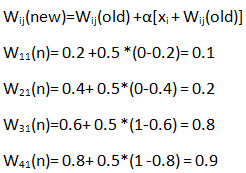 Similarly, calculate the new weight matrix for the other three inputs.

1st iteration or epoch is complete. 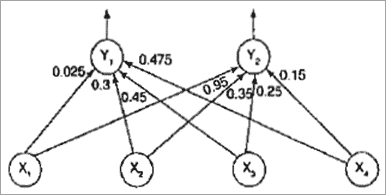 More iterations can be performed until the learning rate reduces to a very small value or till the radius becomes zero.

Multi-layer perceptron networks are the networks with one or more hidden layers. The backpropagation network is a type of MLP that has 2 phases i.e. Feed Forward Phase and Reverse Phase.

In the Feedforward phase, the input neuron pattern is fed to the network and the output gets calculated when the input signals pass through the hidden input and output layer.

In Reverse Phase, the error is backpropagated to the hidden and input layer for weights adjustment. The error is calculated at the output layer when the actual output is compared with the target value.

Some networks also calculate the error at the hidden layer which is propagated back to the input layer. This helps in more accuracy and convergence. BPNs are supervised multilayer perceptron networks.

Radial Bias function uses Gaussian or Sigmoidal functions to regularise the networks. For many input nodes, each node produces a similar output within a fixed radial distance from the center of the kernel.