In our previous tutorial, we have learned about downloading generic Java package, Docker toolbox, pulling in Jenkins image on the toolbox and various methods of running Jenkins, like, running as a standalone application, running on an application server, running as a windows service, and finally running on a Docker.

In this tutorial, we will be discussing everything about a Jenkins job, different types of Jenkins job, configuring Source Code Management, Build Triggers, Schedule Build Jobs, Polling the SCM, Maven Build Steps. 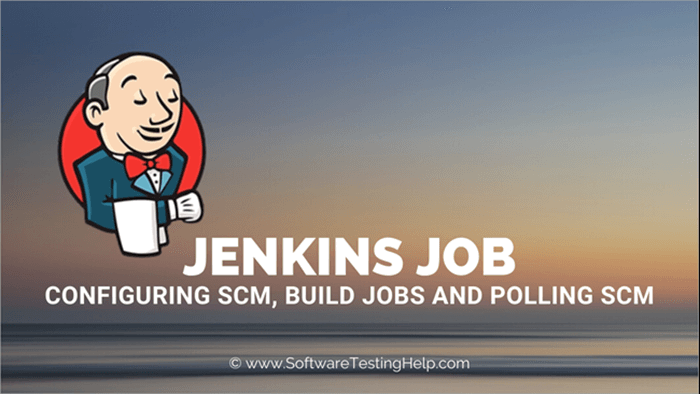 What Is A Jenkins Job?

In simple words, any automated process that is implemented in Jenkins is a Jenkins Job.

#1) Run Jenkins as a standalone application: Please refer to the tutorial “Installing and Running Jenkins” to get the detailed steps.

#3) Click on “New Item” on the Jenkins dashboard as shown in Figure 1 below. 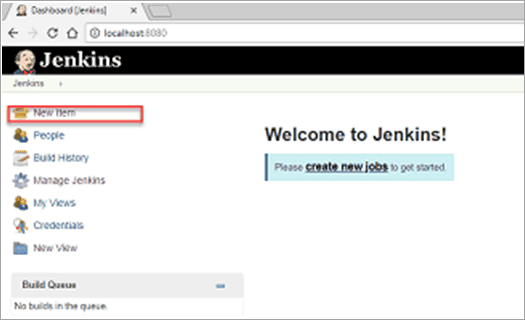 #4) Upon clicking on a New Item, it will give the list of different Jenkins jobs. This is as shown in Figure 2. 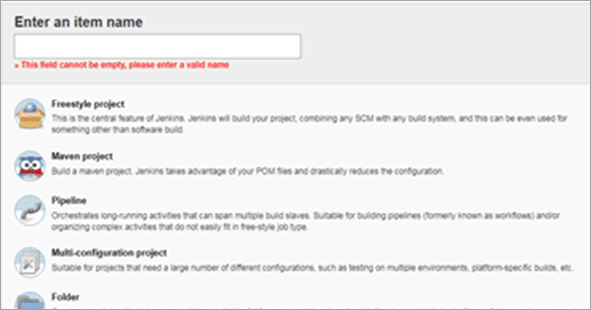 As shown in the above figure, different types of Jenkins Jobs are:

(i) Freestyle Project: This is a regular and popular job in Jenkins which allows us to build our project, integrate our builds or source code management with Jenkins, poll the SCM, create triggers, and many more.

(ii) Maven Project: Enables us to build our maven projects. We need to only specify the location of our pom.xml file to build the project. All other features like creating triggers, poll SCM remains the same.

(iii) Pipeline: It is a kind of job which lets us declare the build process like compile, run, and report generations if required.

All the above steps can be mentioned in the file called Jenkinsfile in our code base and specify the same path in Jenkins as well. This will run the Jenkinsfile and show the stages of deployment like build, run, etc. This can be followed if we need to run on only one branch.

If we want to run our pipeline on multiple branches or versions of the codebase we make use of the multibranch pipeline.

(iv) Multi-configuration: This kind of project is for a large codebase that needs to be run on different configurations of operating systems.

(v) Folder: In this kind of project, a folder which is a container for all other kinds of projects is created first. We can also make these folders secure.

Following are the steps to configure Source Code Mgement:

#1) First, log in to the GitHub repository and select the repository created. I have already created a repository that contains a Java file having a simple selenium script and the print statement. Please refer to Figure 3. 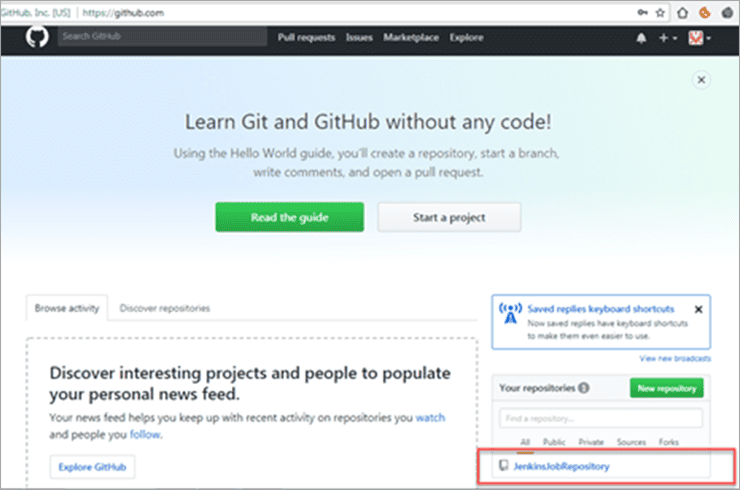 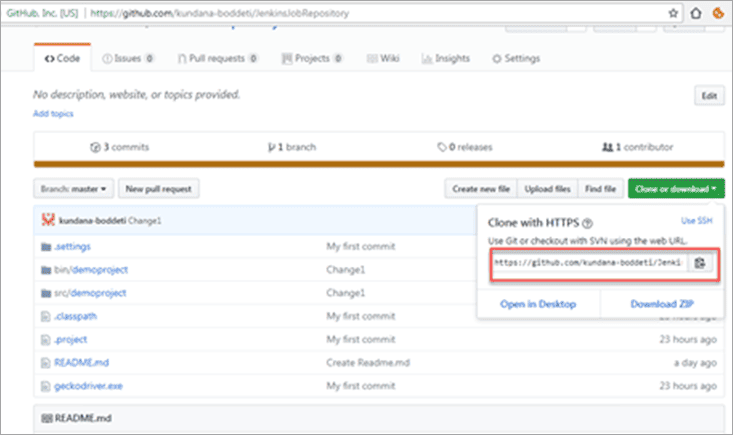 #4) Type a project name and select Freestyle project from a list of jobs enlisted as shown in Figure 5. 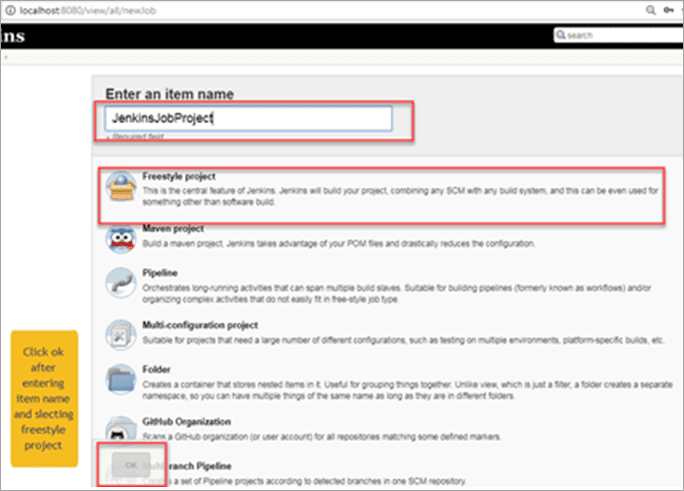 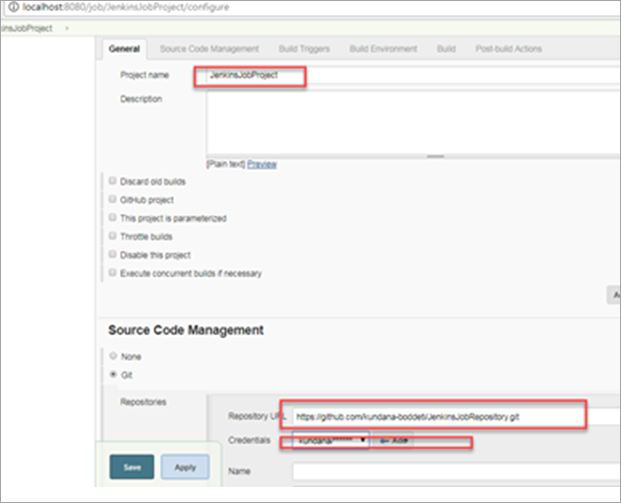 #6) Provide the required build commands to run the code. Here we have used execute windows batch command as shown in Figure 7 below. 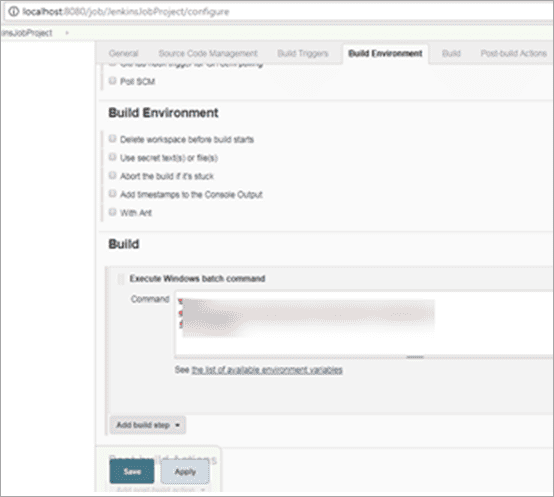 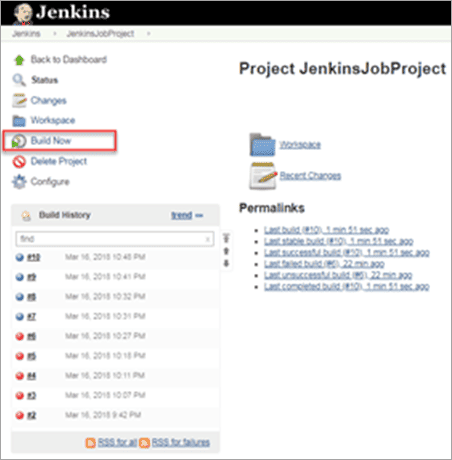 Figure 8: Build Now in a dashboard

#9) Find the result in the console output as shown in Figure 9. 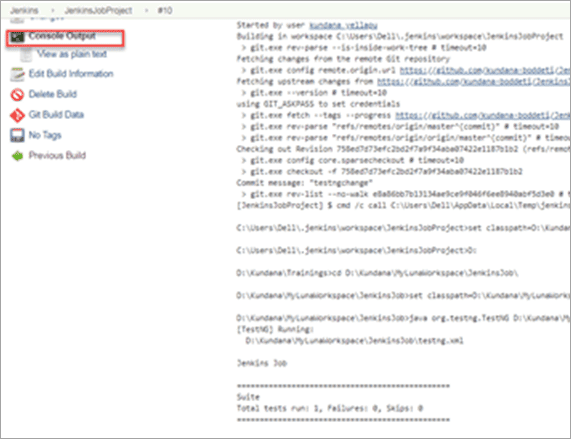 Figure 9: Console Output under the project

Note: To get the console output, click on the build result (indicated in blue or red). This will take you to the screen shown in Figure 9.

What is a trigger?

A trigger lets us execute a job on an event occurrence. This event is called a trigger. To see the list of build triggers, we need to login to Jenkins and click on any item already created and click on configure.

The list of triggers is shown in Figure 10 below: 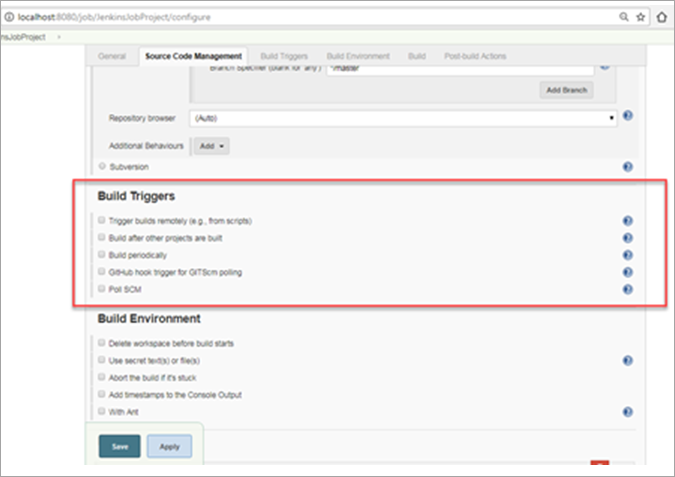 We need to do the following to schedule a job to build :

Note: Only for demo purpose, we are giving cron as ***** which means trigger the build every minute. Please disable it or give a cron of your choice. 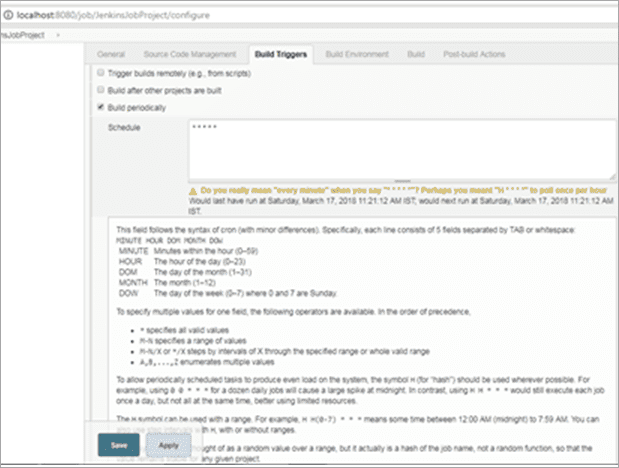 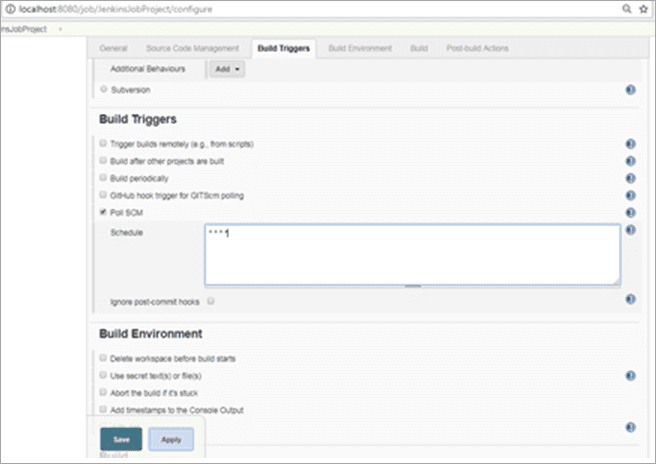 #6) Provide the path for the Maven bin as shown in Figure 13. 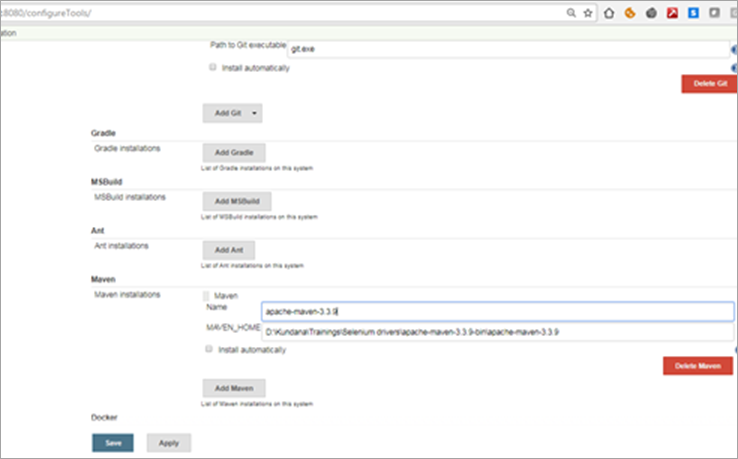 #9) Enter Item name and Select Maven project and click on Apply as shown in Figure 14. 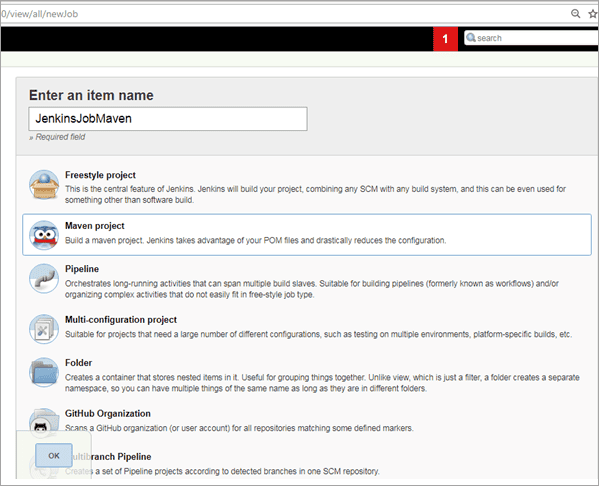 Figure 14: Creation of the Maven Project

#10) In the configure page of the Maven, enter a description, and under Maven click on advanced. 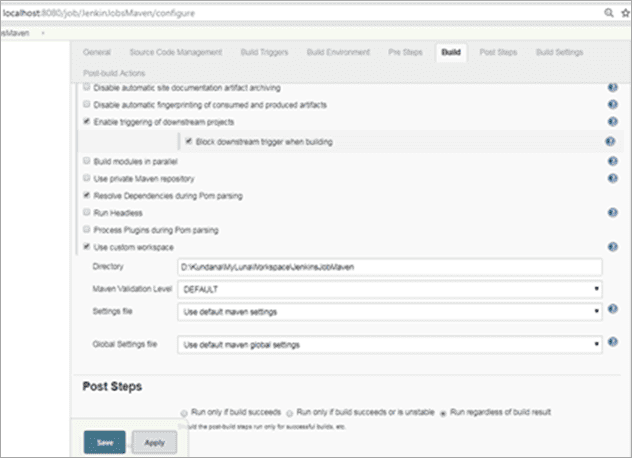 #12) Under build, set the goals and options to clean compile test.

#14) Click on Build Now which is present in New Item. 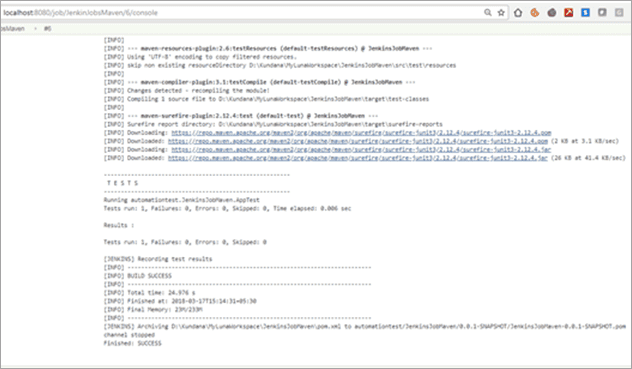 In this tutorial we learned about different types of Jenkins jobs, what are build triggers, configuring the SCM, polling the SCM, scheduling a job, and finally creating a Maven project.