This Web Services Tutorial Explains The Architecture, Types & Components of a Web Service Along With Important Terminologies and the Differences Between SOAP Vs REST:

In this Complete API Testing Tutorial Series, we explored all about API Testing in our previous tutorial. Go through this tutorial to become familiar with WSDL and UDDI and how they store and define a Web Service.

This tutorial will also explain how Web Services works internally when a client application makes a request. WSS, which is another very important concept of SOAP Services, is also explained here. 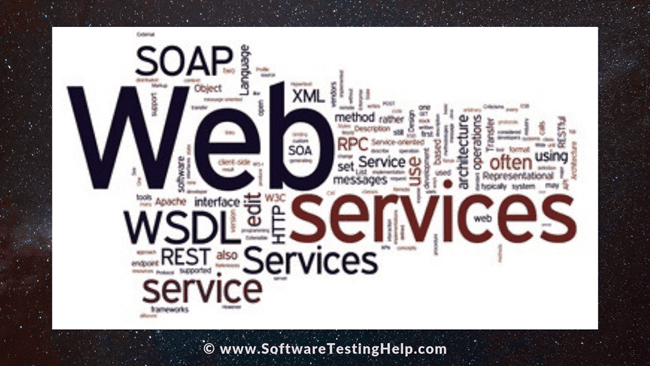 Before we start exploring Web Services, we should be familiar with the important terms that are used in Web Services Testing.

Web Services support “One Code Different Applications”. This means one generic code for all applications across different platforms.

Thus, interoperability is the process that facilitates multiple applications to communicate with the other applications residing on a different platform.

These are mainly used in SOAP Web Services. In general terms, Authentication means validating something whereas Authorization means giving/having the right to access something.

For Example – If I have a Facebook page, then I can be treated as an authenticated user of Facebook. Whereas, if you have the right to view my photos on facebook then you are an authorized user.

Combining these two we can say that “All authenticated users who have access to the resources are known as Authorized Users for those resources.”

The same thing happens in Web Services i.e. the user id, and password that is used to generate the token covers the authentication portion and this token which will be used in sending a request to the webserver cover the authorization portion.

Web Services are based on Loosely Coupled Architecture. This means that the interfaces of Web Services are dynamic (changes during a given timeline) in nature. But the client logic does not necessarily have to change while interacting with the service.

This facilitates the integration of multiple software in a more efficient way. If it was a Tightly Coupled Architecture, then each time when the interface changes, the client logic has to be changed to make it synchronized with the service.

It is a term that is used in Web Services to denote information or data. This is not the whole data but a piece of information that may include a URL or URI, context key, document key, a payload or supportive images.

This is a very common term that is used in every request of the web service. This is the complete URL that hits the instance of the Web Service.

For Example – https://www.facebook.com/imsaket -> this is the complete URL or endpoint which has facebook.com as the URL and “imsaket” is passed as a context key to uniquely identify a specific address.

This is in the client-server interaction in which it does not matter how many times you hit the instance of the service, and the server will always return the same response to the client.

As we know, encapsulation is an OOPS principle which is defined as wrapping up of code and data into one. The same thing happens in SOAP Web Services. When we wrap or encapsulate data into payload (XML) to form a SOAP message and send it to the server, then this process of encapsulating is called Marshalling.

Demarshalling is just the reciprocal of Marshalling. The method of decapsulating or unwrapping data and code (XML) from the SOAP message is called “Demarshalling”.

What Is A Web Service?

As discussed earlier, Web Services are the services that serve from one machine to another over a network.

Example of Web Services: AWS (Amazon Web Services) which allows the online users to view the prices of different items sold on Amazon.com and Amazon.in

Enlisted below are the various components of Web Services.

Web Services use the Simple Object Access Protocol (SOAP) which uses XML as a payload or request body. This is a stateful protocol as there is no independent method for the specific type of operation.

All the requests and responses are carried at once through XML and no independent methods like GET, PUT, POST or DELETE are explicitly provided.

Another useful component is UDDI. This stands for Universal Description Discovery and Integration. There is a service provider who provides the Web Service. Hence, for a particular service provider, this UDDI is used for describing, discovering and publishing those Web Services.

UDDI is responsible for letting a client find out (UDDI provides a repository for WSDL) where the WSDL’s XML file is located. This is how a Web Service is defined and described.

It stands for Extensible Markup Language – Remote Procedure. Another very important component of Web Service is XML – RPC which is responsible for sending messages across systems. Requests and responses are in the form of XML and are sent/received through the HTTP POST.

The best feature of XML-RPC is that a client application residing on a different platform can communicate with a different server. There is something called JSON-RPC which has been explained in the latter part of the article as it does not form a component of a Web Service.

The Architecture Of A Web Service

The architecture of a Web Service can be depicted in the following diagram.

As we already know, a typical Web Services architecture comprises three entities i.e. a Client, a Web Server, and an Internet to carry out the operation. The operation is nothing but the request and response in a client-server architecture.

A Client is typically a set of all the applications or software systems that requests a Web Service thereby making it a Service Consumer.

A Web Server is a set of all applications or software systems that provide Web Service. Every Web Service requires a network to perform and this results in the third entity called the Internet.

This is just an overview of the architecture of a Web Service.

The working diagram of a Web Service is defined by the three components shown below.

This is explained (in detail with diagram) in the architecture of SOAP Service.

Two types of Web Services are explained below in detail.

SOAP Service stands for Simple Object Access Protocol. SOAP services are stateful services that use XML language to form an envelope. A SOAP envelope can be described in two portions i.e. one is a SOAP header and body, the other one is the protocol used to send SOAP messages.

This SOAP header consists of Authentication and Authorization which grants access. The body comes under the payload section of the request which uses WSDL to describe the Web Service and the protocol is mainly HTTP (HyperText Transmission Protocol).

SOAP services have an SSL layer (Secure Socket Layer) which is responsible for avoiding any data leakage during transmission, and thus provides encryption and decryption.

Meanwhile, the SOAP services are more secure as it also has WSS (Web Services Security) which guarantees no divulge during communication between the service and the application.

As we all know, every Web Service (unlike Web API), needs a network to carry out its operation. Thus, it becomes necessary for Web Services to provide security when connected to a network. Hence, Web Services has three important entities to cover the security factor during message transfer.

These three factors constitute Web Services Security to cope up with the external attacks.

The Architecture Of SOAP Service

Every SOAP service depends on three entities which ultimately form the architecture of SOAP Service. 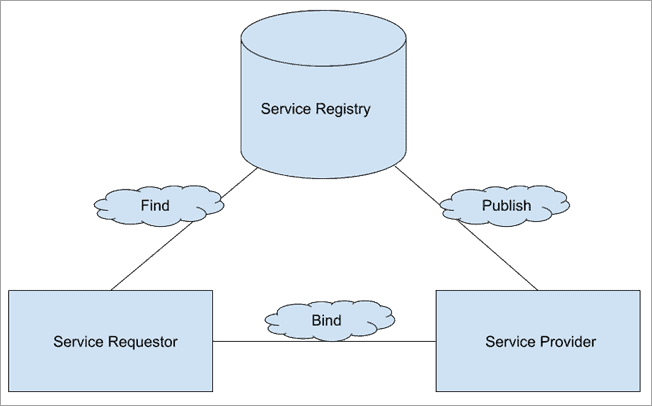 These three entities interact with each other to carry out a successful Web Service Implementation. This is done in three phases. The first phase is the Publish() phase where a Service Provider feeds all the details about a Web Service in a Service Registry or Repository.

REST stands for Representational State Transfer which is a Stateless Service.

It is called Stateless as the Web Server does not store any information about the client session (time duration till the client application is connected and in execution) which means each request type is treated and performed easily with the help of REST inbuilt methods like GET, POST, CUSTOM (PUT), DELETE, HEAD and so on.

Indeed, these methods are not present in SOAP.

Each method in REST has its significance. Given Below is the briefing about each of them.

Note: The HTTP response codes depend on how developers code and can be manipulated at times. We have listed down the common response codes that we get from each method type.

The Architecture Of REST Service

The client application which is typically a Service Consumer uses inbuilt methods of REST, a URL or URI, an HTTP version and a payload (if supported by method).

Although these two types of Web Services are used to carry out the request and response, they are entirely different in the way they operate.

Their differences are listed down for your reference.

This Web Services tutorial explained the architecture, components, and types of Web Services.

We also learned about differences between SOAP and REST services, along with other important concepts and terminologies related to Web Services.

We hope that this tutorial helped you understand Web Services!!