Learn all about XML Path Language (XPath) with Examples. This XPath Tutorial covers the Uses and Types of XPath, XPath Operators, Axes, & Applications in Testing:

The term XPath stands for XML Path Language. It is a query language employed for selecting various nodes in the XML document.

As SQL is used as the query language for different databases (For Example, SQL can be used in database like MySQL, Oracle, DB2, etc ), XPath can also be used for various languages and tools (For Example, languages like XSLT, XQuery, XLink, XPointer, etc. and tools like MarkLogic, Software Testing tools like Selenium, etc.) 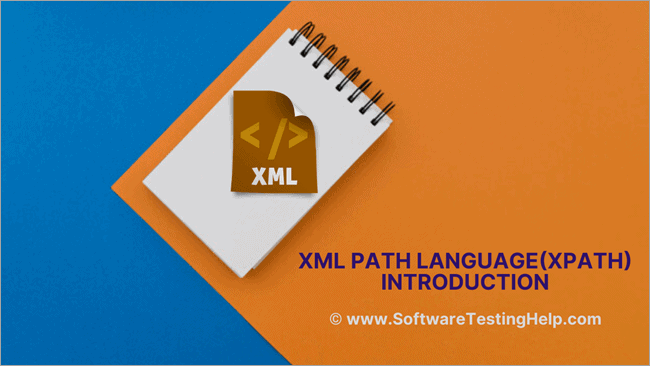 Xpath is basically a language for navigation through XML documents and while discussing navigation, it means moving in an XML document in any direction, going to any element or any attribute and text node. XPath is a recommended language of the World Wide Web Consortium(W3C).

Where Can We Use XPath?

XPath can be used in both the Software Development industry and Software Testing industry.

XSLT is predominantly used in the XML Content conversion domain and uses XPath for conversion. XSLT works closely with XPath and some other languages like XQuery and XPointer.

Enlisted below are the various types of XPath Node.

#1) Element Nodes: These are the nodes that come directly under the root node. An element node can contain attributes in it. It represents an XML tag. As given in the below example: Software Tester, State, Country are the element nodes.

#3) Text Nodes: All the texts that come in between element node is known as text node like in below example “Delhi”, “India”, “Chennai” is the text nodes.

#4) Comment Nodes: This is something that a tester or developer writes to explain the code which is not processed by the programming languages. Comments (some text) comes in between these opening and closing tags: <!– put comments here –>

#5) Namespaces: T\”;0j89////  /these are used to remove ambiguity between more than one set of the XML element names. For Example, in XSLT the default namespace is used as (XSL:).

#6) Processing Instructions: These contain instructions that could be used in the applications for processing. The presence of these processing instructions could be anywhere in the document. These come in between <? ….. ?>.

#7) Root Node: This defines the topmost element node which contains all the child elements inside it. Root Node does not have a parent node. In the below XML example the root node is “SoftwareTestersList”. To select the root node, we use forward slash i.e. ’/’.

We will write a basic XML program to explain the above-mentioned terms.

Atomic Values: All those nodes which do not have either child nodes or parent nodes, are known as Atomic Values.

Context Node: This is a particular node in the XML document on which expressions are evaluated. It could also be considered as the current node and abbreviated with a single period (.).

Absolute Xpath: This is the XPath expression in the XML document that starts with the root node or with ‘/’, For Example, /SoftwareTestersList/softwareTester/@name=” T1″

Given below are the various Datatypes in XPath.

Enlisted below are the Wildcards in XPath.

Note: In the below table, e stands for any XPath expression.

Predicates are used as filters that restrict the nodes selected by the XPath expression. Each predicate is converted to Boolean value either true or false, if it is true for the given XPath then that node will get selected, if it is false then the node will not be selected.

This will select the <softwareTester> element which has been named as an attribute with the value of T2.

Applications Of XPath In Software Testing

XPath is very useful in Automation testing. Even if you are doing Manual testing, the knowledge of XPaths will be very useful to help you understand what’s happening at the backend of the application.

If you are in Automation testing, you must have heard about Appium studio which is one of the best automation tools for Mobile Apps Testing. In this tool, there is one very powerful feature called the XPath feature which enables you to identify the elements of a specific page throughout the automation script.

We would like to quote another example here from the tool which almost every software tester knows i.e. Selenium. The knowledge of XPath in Selenium IDE and Selenium WebDriver is a must-have skill for testers.

XPath acts as an element locator. Whenever you are required to locate a specific element on a page and perform some action over it, you need to mention its XPath in the target column of the Selenium script. 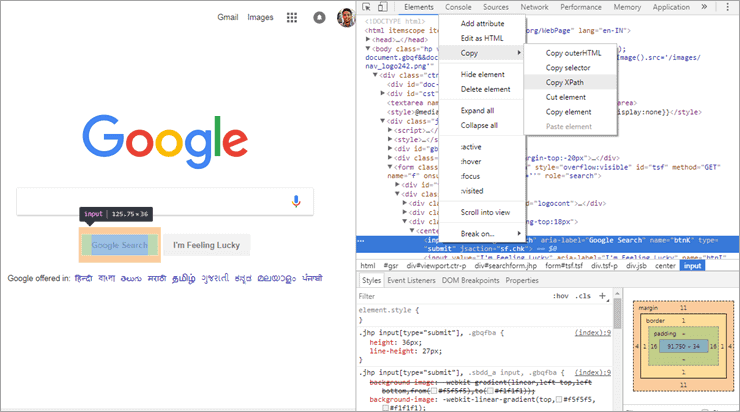 As you can see in the above image, if you select any element of a web page and inspect it, you will get an option of ‘Copy XPath’. As an example was taken from Google search web element through the Chrome web browser and when the XPath was copied as shown in the above image, we got the below value:

Now, if suppose we need to perform a click action on this link then we will have to provide a click command in the Selenium script and the target of the click command will be the above XPath. The usage of XPath is not just limited to the above two tools. There are a lot of areas and tools of software testing in which XPath is used.

We hope that you got a fair idea about the importance of XPath in the field of software testing.

In this tutorial, we have learned about XPath, How to use XPath expression, Support for XPath expression in different languages and tools. We learned that XPath can be used in any domain of Software Development and Software Testing.