This Tutorial will Cover Different Types of Variables Supported by the Postman Tool and How They can be Used while Creating and Executing Postman Requests & Collections:

We will also touch upon the concept of environment files and see how they can be leveraged while creating and executing collections. 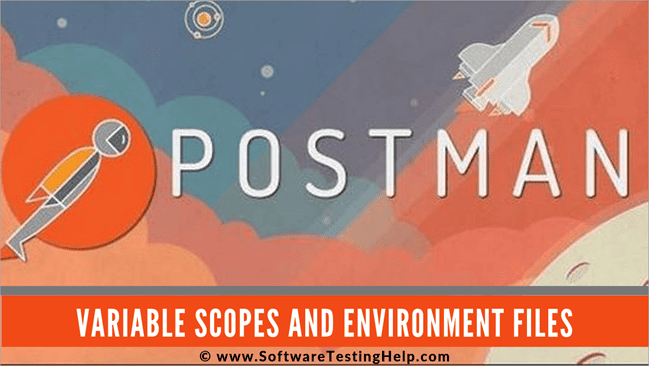 What Are Variables In Postman?

Variables, like any other programming language, are nothing but placeholders to hold some value or result of some expressions.

For example, Consider a variable declaration in C#/Javascript that holds string value “hello world!”. Now whenever this string is required, someone can just use the name of the variable to get the value replaced as the actual string.

Let’s try to dig deeper into variables in Postman.

Variables here are typically used in a context where you need to replace values in request bodies, make assertions for the response body and use them in pre-request scripts to handle pre-processing logic as required.

Firstly, let’s try to understand different variable scopes in Postman. Scope is nothing but the lifetime and accessibility of a variable. It’s similar to the concept of scope that we have in programming languages like Java.

For Example, a variable can have a global scope i.e. any class/method can access/modify the variable until the method or program is active.

Postman offers 5 different types of variable scopes as stated below:

Note: It’s important to understand that all the different types of Postman variables can be added/removed using the Postman console and most of them can be accessed and updated using scripts as well.

Let’s try to understand each of these variable types and scope in detail!!

What are Global Variables and when should they be used?

Global variables are general-purpose variables and should be mostly avoided and used only for quick prototyping requirements. These variables are available to all requests available in the Postman console, irrespective of what collection they belong to.

To work with global variables, they can be controlled through the Postman console as well as the scripts in Postman requests.

Through the Postman console, click on the “Eye” icon near the environment selector, and that will open a popup/context window with details around the current global variables. 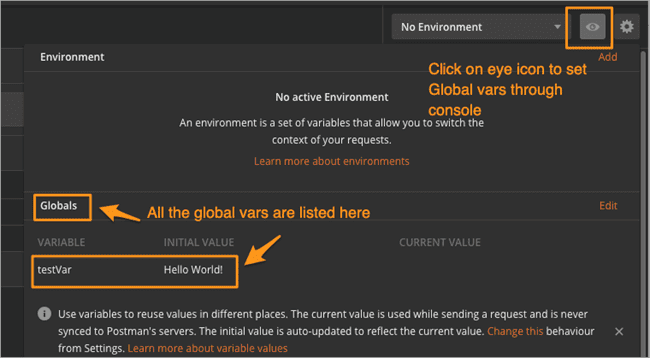 Now create a new variable by entering the variable name and its initial value.

The initial value is something that is persisted by default for that variable and the current value keeps changing as it is set or updated in the requests that are using these variables. 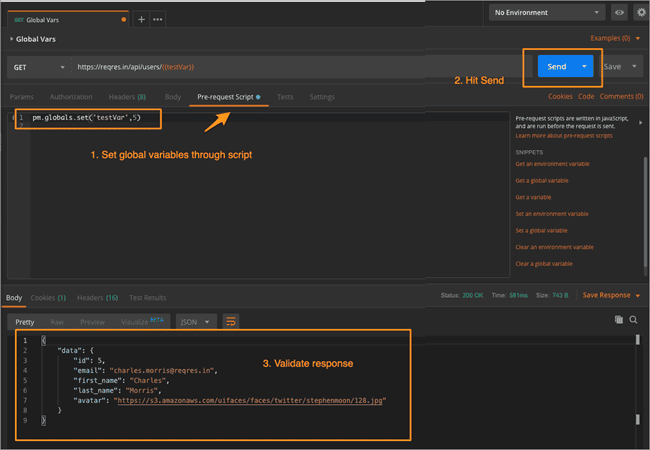 Use the below command to get the value of a global variable named ‘testVar’.

Use the below command to set the value of a global variable named ‘testVar’.

If you want to remove a global variable through script, then you can use the unset function as mentioned below.

To clear all the global variables through the script, you can use the below function.

What are Collection Variables and when should they be used?

Collection variables are used to define variables at the collection scope. As we know, a collection in Postman is nothing but a group of Postman requests.

How Are They Created?

Collection variables can be created and/or removed only using the Postman application console.

#1) Select the collection where you want to add a variable. Right click and select edit. 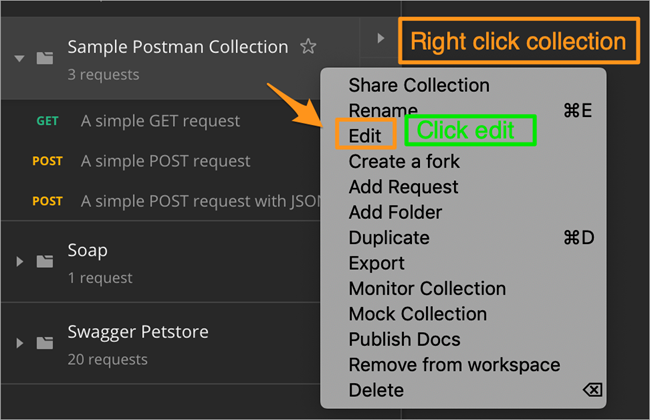 #2) Now select the “Variables” tab and add the collection variables that are required to be added. 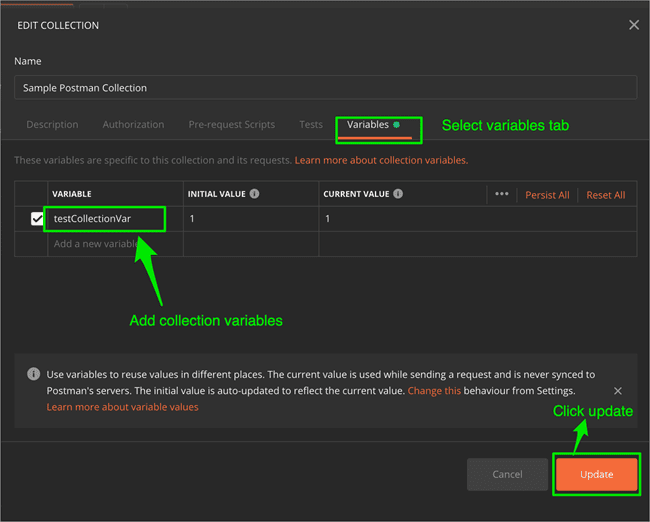 To use Postman variables as a part of the request builder, simply use the double curly brace syntax as shown below. 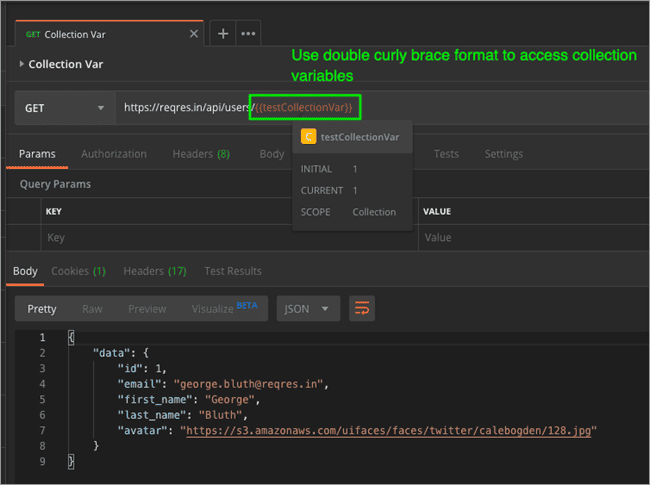 What are the Environment Variables?

Environment variables are the most heavily used kind of variables in Postman.

They are tied to a selected environment that’s being used for executing the request. They have a narrower scope than the Global variables but broader than the Collection variables.

When To Use the Environment Variables?

How Are They Created?

Unlike Collection variables, Environment variables can be created both through the console as well as through the script itself. 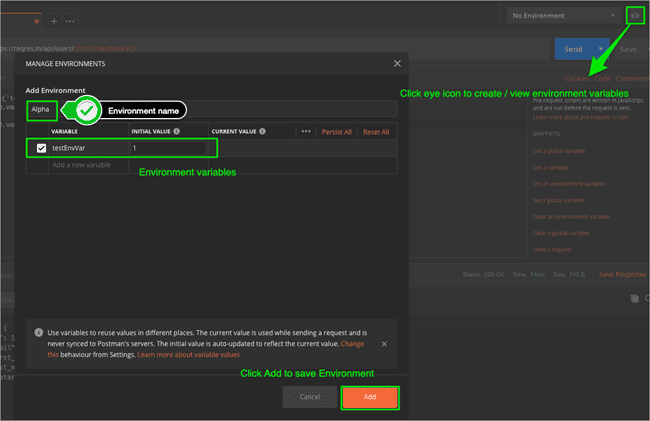 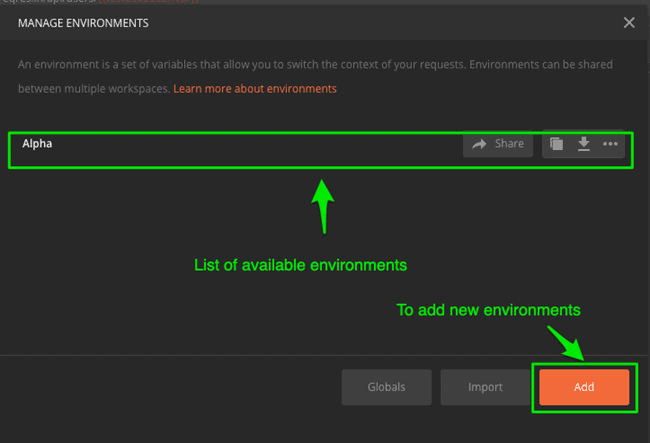 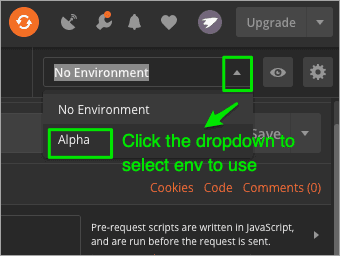 Similar to the Collection & Global variables, Environment variables can be acted upon programmatically through the script and can be used directly as a part of the URLs or request body through double curly braces syntax.

When an appropriate environment is selected in the environment selector, you can simply use the double curly brace syntax to access an Environment variable as depicted in the below screenshot.

Please note that here, we are using pm.environment and not pm.variables i.e. the scope is always set to the environment and Postman will try to find out the variable only in the selected environment.

What are Local Variables?

One important use case of local variables is that they can be used when you want to override the values of a variable that is defined in any other scope like Global, Collection or Environment.

i.e. Suppose there’s a global variable named ‘testVar’ and now you want to override the value without affecting the Global variable, you can create a local variable with the same name and use it with the value you like.

When to Use the Local Variables?

Local variables can be used in the same way as Collection, Global and Environment variables that we discussed in the earlier sections of this tutorial.

It’s important to note here that, to use the Local variables programmatically, you have to use pm.variables.get / pm.variables.set unlike pm.environment or pm.global which was used for the Environment and Global variables.

What Are Data Variables?

Data variables come in the context of request execution through the collection runner.

It’s important to note here that the source of Data variables is the user-supplied data file in the format of JSON or CSV, and during the request execution, the Data variables can only be fetched but not updated/modified or added.

When To Use Data Variables?

Data variables are used while we are working with multiple data-sets and they exist only during the execution of an iteration from the data file.

How To Use a Data Variable?

Let’s see an end to end scenario of executing requests through collection runner and supplying a data file whose value is replaced while the request is getting executed.

Let’s add a simple GET request to a new collection to illustrate the concept of Data variables. We will use the same GET endpoint https://reqres.in/api/users/{userId}

We will be fetching the {userId} through a Data variable which will be backed by a CSV file containing the values for the userId.

Please follow the below steps to understand the flow.

#1) Change the request URL in the Postman request builder to https://reqres.in/api/users/{{testDataVar}}.

#2) Here, {{testDataVar}} is our data variable whose value will be fetched from the data source that will be used with the collection runner.

#3) Create a new data file in CSV format with the column name as “testDataVar”.

Set the data in the CSV file as below: 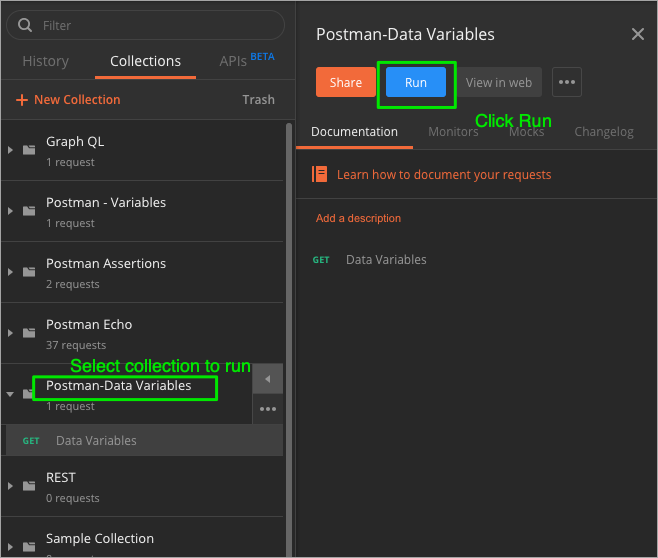 #6) Select the created csv data file in the collection runner configuration and the file type as text/csv. 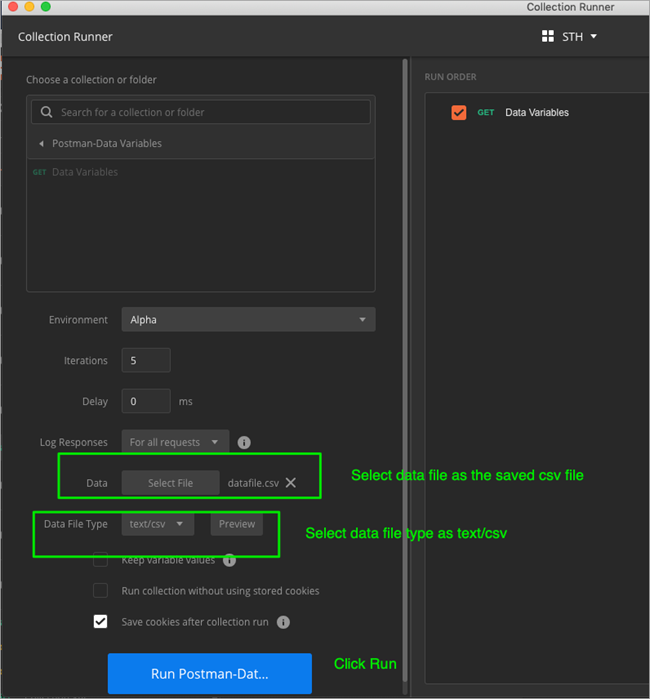 #7) Now hit “Run Postman collection” and refer to the “Run Results” window. There’s an execution detail for the configured request for each iteration that was performed. The number of iterations depends upon the number of data inputs that were configured in the CSV file. 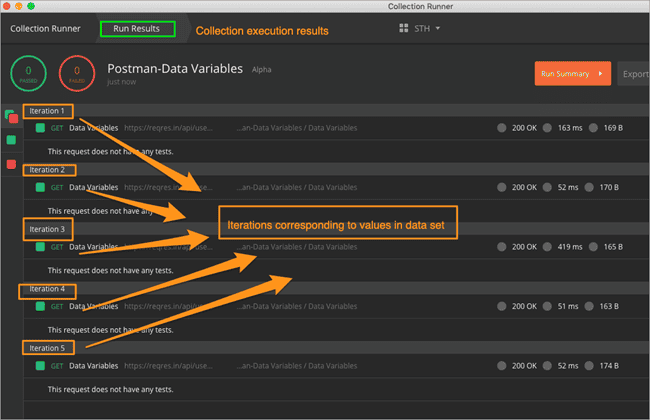 Postman variables can be accessed in 2 ways as stated below.

To fetch a Variable:

To set a Variable value.

It’s important to note here, that when a variable is set, it will try to find the closest scope variable and set or modify that variable. In case, there is no variable found during the set, the Postman script will simply create a new Local variable.

#1) It is advisable to have different variable names in different scopes, to avoid confusion as Postman sandbox will choose the variable with the closest scope when it tries to resolve variables in the request builder with double curly brace format or when the pm.variables.get / pm.variables.set script is resolved.

In this tutorial, we touched upon a lot of concepts related to variables in Postman along with the different ways to use them. We discussed the types of variables like Global, Collection, Environment, Local & Data and when to use each of them.

In a nutshell, Postman variables add a lot of power to the way in which the tool can be used and configured for executing requests and tests in an effective way. Few references from the Postman official documentation could be obtained here.