In this article, we will see how to get started with REST API Testing in BDD style with the Cucumber framework.

Before diving deep into the topic, let us understand the important concepts involved in it. 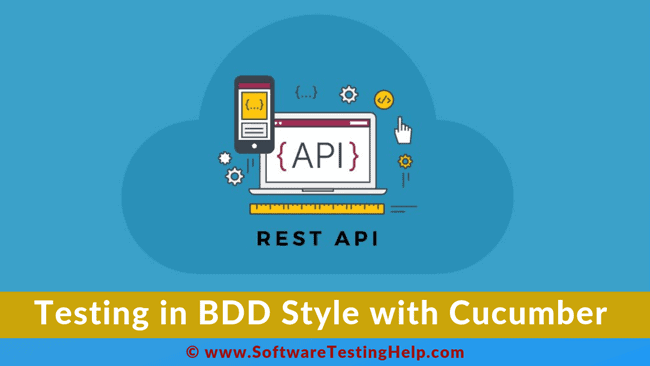 RestTemplate is an open-source spring framework class that provides a convenient way to test the HTTP based restful web services by providing overloaded methods for the HTTP methods.

The principle of BDD testing is that test cases are written in a natural language that is easily readable by the non-programmers as well.

Cucumber is a tool that supports Behavior-driven development

How Does Cucumber Work?

Feature files are written by your Business Analyst or maybe your Sponsor. These are written in natural language format having specifications described in it and validate that the application’s functions as per the specifications.

These specifications have multiple scenarios or examples mentioned in it. Each scenario is a list of certain steps for Cucumber to work through.

Let us consider a scenario where the user wants to log in to the system.

Just to get an idea, this is how a sample scenario will look like:

You can see, each scenario is a kind of list of the steps for Cucumber to work through. For Cucumber to understand the scenarios, they must follow some basic syntax rules, called Gherkin.

Step definitions files map each Gherkin step mentioned in a Feature file to the implementation code. This enables Cucumber to execute the action that is required to be performed by the step.

Note: In the article ‘REST API Testing with Spring RestTemplate and TestNG’, we have developed the TestNG test project with the Spring template.

Now, we will develop the Test Framework for the same REST service and RestTemplate, but by using Cucumber for behavior-driven development testing style.

Let’s get started with the setup of our automation test framework with Cucumber!

(i) We are going to use Java for step definition development. So, First Download JDK installer for windows from Oracle and install Java on your machine.

(ii) IDE (Integrated Development Environment): I have used Eclipse as an IDE for my Automation Test Suite development. You can download it from Eclipse

(iii) Get Eclipse Plug-in for Cucumber: 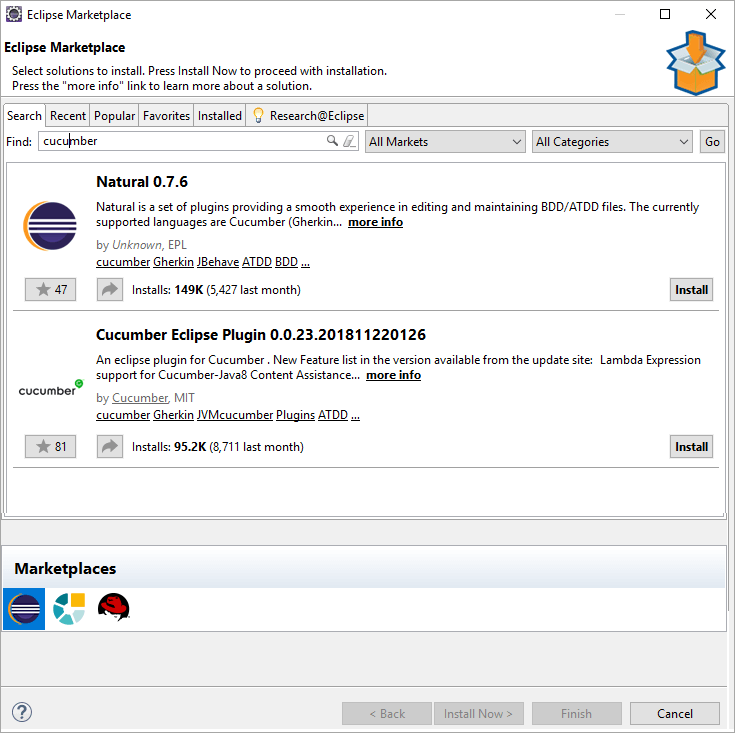 Finally, click on the checkbox to accept the License Agreement and click on the Finish button. This will complete the installation. Now, Restart the Eclipse IDE. This is required to take plug-in installation in effect.

(iv) Spring Jars: As we are going to use RestTemplate class that belongs to the spring framework, you need to have spring framework jars. You can download spring jars from the Spring Framework and save it to the local folder. For Example, C:/projectJar

(v) JSON-Simple Jars: We need to perform JSON parsing. Hence, we will use a lightweight JSON-simple API. So, Download JSON-simple-1.1.jar and save it to C:/projectJar

You would need the following Cucumber jars, to run the Cucumber project:

Now, with this, we have completed all the necessary installations. So, let us create our BDD Test Automation project.

Your project structure will be displayed as follows in the Eclipse Package Explorer.

Now, let us build our feature file DemoFeature.feature having the feature as Performing CRUD operations on employee service.

In our example, I have used one dummy http://dummy.restapiexample.com/api sample REST Service.

This feature file describes the scenarios to perform the CRUD operations i.e. to cover CRUD (Create-Read-Update-Delete).

So, in our feature file, the Scenario will look as follows:

Similarly, you can write the remaining Scenarios as shown below. 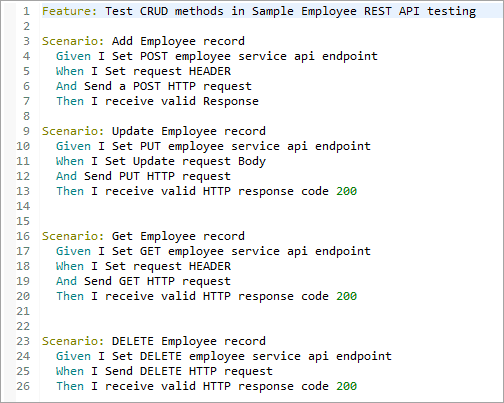 For feature steps used in the above scenarios, you need to write programmatic implementations, in this case, it is Java.

A Step Definition is a method written in Java having an expression. It links its method to one or multiple steps. So, when Cucumber executes the steps described in a scenario of the feature file, it first looks for a matching step definition to execute.

For Example, when step definition for Add employee using POST can be written as follows.

For Given step, implementation is written as follows:

Similarly, for When step, the following is the definition method:

Now, here is the verification step part i.e. the Then step implementation:

Note: Here, we are using the RestTemplate method for Sending request. This is same as the method used in ‘REST API Testing with Spring RestTemplate and TestNG’. To know more about Rest Template methods, you can refer to the tutorial.

Thus, your step definition will look as follows. 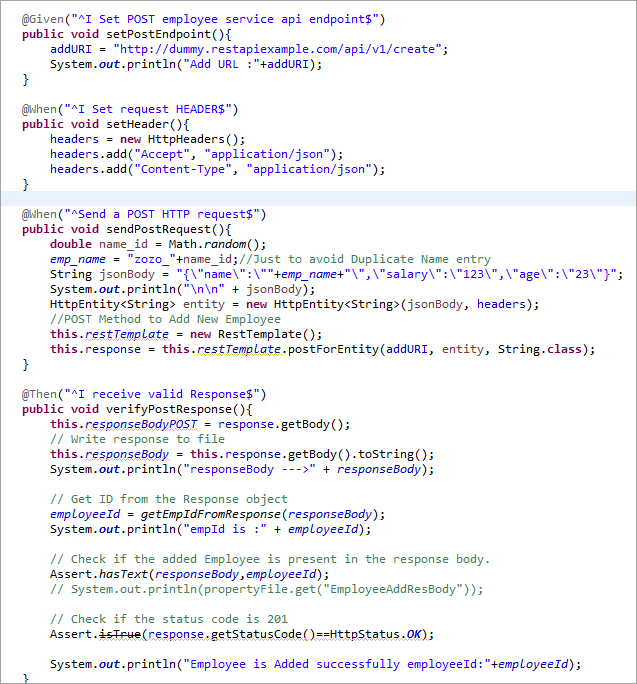 You can implement the step definitions for the remaining scenarios Update, Read, and Delete Employee in the same way.

Now, we have completed our scenario and step script development task, so let’s run our tests. For this, we need to write a JUnit runner class.

Here, you need to add the following annotations above the class name:

@RunWith(Cucumber.class): To run as a test runner class for Cucumber.

@CucumberOptions: Here you specify the Features file location and Step definition file location for the Cucumber framework to look into during execution.

Plug-in: This is used to specify different formatting options for the report which gets generated as output.

Just right-click on TestRunner.java and select the option ‘Run as JUnit Test’. This will display the test execution result as follows. 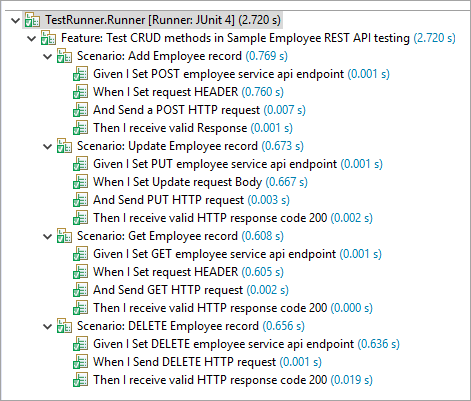 You will see the following messages on Console. 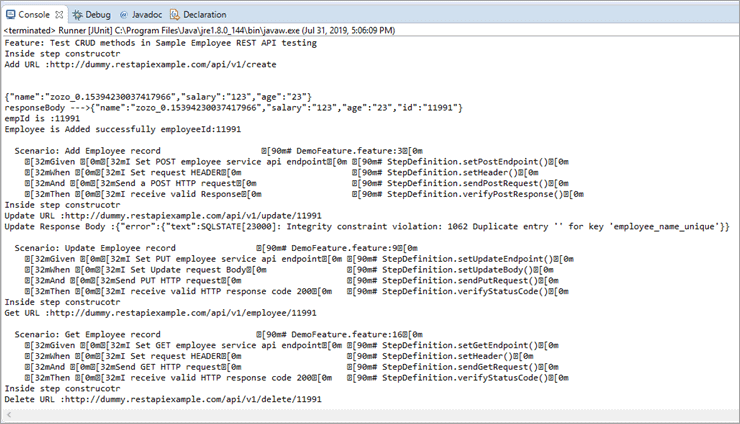 We have seen the result on the console. However, Cucumber provides test results in a more presentable HTML format that can be shared with your stakeholders.

Open target -> cucumber-reports in the browser.

Here plugin is the option that we specify for HTML format reports along with the folder.

Now open target\cucumber-reports\index.html page. The report page is the HTML page where you can see the Feature name with Scenarios that got executed successfully.

So, your Report will look as follows. 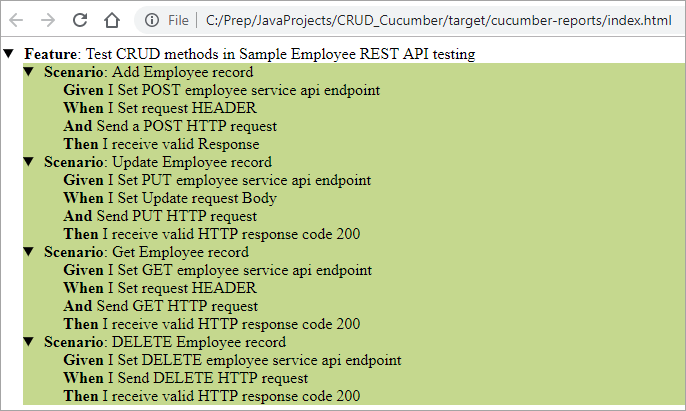 To conclude this tutorial, let us summarize what we have learned so far.

We saw all the steps from the beginning to set up the BDD Cucumber REST API Test Automation Framework.

In this process we learned the following:

In short, this article explained how to get started with the REST API Test automation with Cucumber. We covered setting up our test automation framework right from installation of all essential software, Project Setup, TestScript development till Test execution and viewing generated reports.

This is sufficient for any automation QA to get started with the test automation framework. But if someone wants to understand in detail how does Cucumber functions internally, how does Gherkin language work, then it can be explored on Cucumber.

I hope you are ready to get started with the Testing Of REST API In BDD Style With Cucumber!!