A Complete Overview of VuGen Script Recording Options in LoadRunner:

A Brief Introduction on VuGen Scripting was given in our earlier tutorial in this Step by Step LoadRunner Guide.

In this tutorial, we will discuss some of the important ‘Recording Options’.

‘Recording Options’ is one of the important concepts in script recording. It allows various options for selection on how the script is to be recorded. 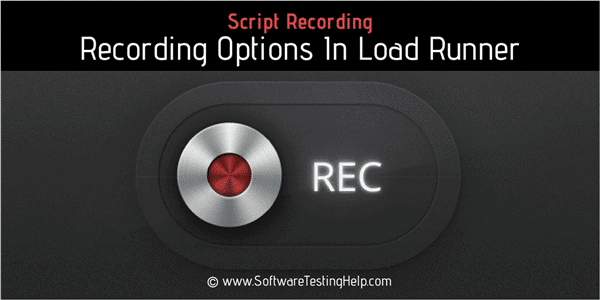 As seen in the previous tutorial, we can see ‘Recording Options’ link on the left bottom corner of the ‘Start Recording’ page.

Click on this link to open the ‘Recording Options’ page. 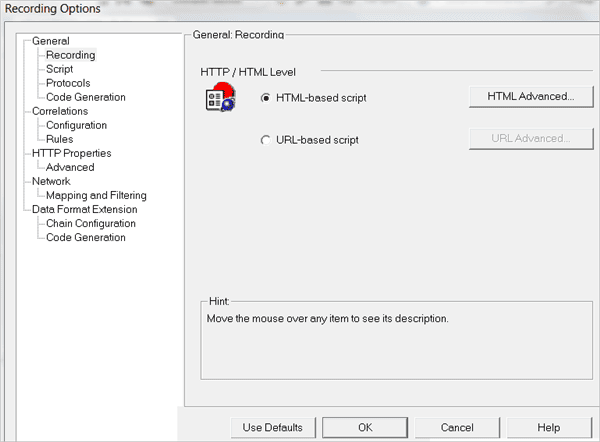 Let us discuss these options in detail now:

This option allows us to select one of the two recording options:

(i) HTML based: HTML based recording is also called as context-sensitive (or context based) recording. In this mode of recording, each user action is recorded as a separate request. For Example, when a user performs an action (example login), one ‘login request’ is created.

In the Example below, we have the Vugen script recorded in the  HTML mode for invoking the url and logging into the ‘Web tours’ application.

Here there are two user actions – Invoke url and Login. Thus two requests are recorded, one for each of these user actions.

Also, if we see, the first request shows the url but the second doesn’t. Which means the second request (Login) is dependent on the response of the previous request (invoke url) and hence this mode of recording is called the ‘Context-sensitive’ recording.

The advantage of HTML based recording is that the scripts are smaller and simple and do not require much customization/enhancements (correlation etc.).

The flipside is that the maintenance of the scripts may become difficult – the requests being context sensitive, any UI change would impact the script and may lead to errors on replay.

An HTML based recording is generally recommended for browser-based applications.

(ii) URL based: URL based recording is also called as context-insensitive or contextless recording. In this mode of recording, each request to the server (initiated by a user action) is recorded as a separate request with the url.

For Example, when a user performs an action (E.g. login to an application), along with the main login HTML page, non-html resources like the images, javascript, CSS files etc. are also downloaded. URL based recording generates requests for each of these requests separately.

In the Example below, we have the Vugen script recorded in the URL mode for launching the url and logging into the ‘Web tours’ application.

Here again, there are two user actions – Invoke url and Login, But there are more than two requests as the images and icons associated with the ‘Invoke url’ action are recorded as separate requests.

If we see, all the requests have their respective URLs. Which means the requests are not dependent on the response of the previous request, hence this mode of recording is called ‘Context-less’ recording.

Scripts generated in the URL based recording are large and complex, hence they require more customization/enhancements (correlation etc.).

However, the maintenance of the scripts is easy, as the requests are being contextless, any UI change would not impact the script.

An URL based recording is generally recommended for non-browser (Windows) based applications.

In the HTML mode, there is a second option ‘A script containing explicit URLs only’ which combines the advantages of both (HTML and URL modes of recording) – the script remains small and simple, hence the maintenance of the scripts becomes easy. This mode of recording is mostly recommended for Web Applications. 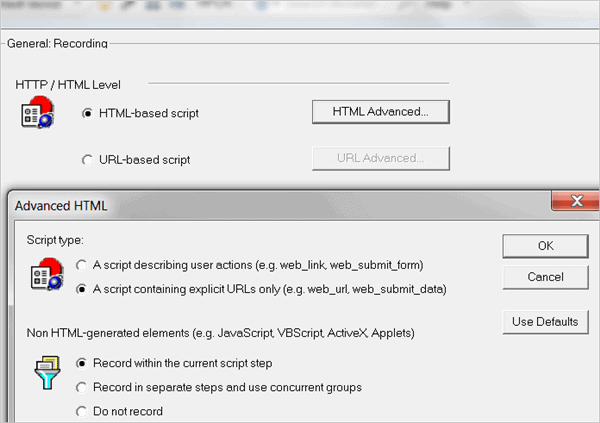 We generally do not change any of these options, but it is worth understanding at least some of them.

Language: This drop-down allows us to select the language to use when working with the script. The allowed language(s) is dependent on the protocol used. For Web-http/HTML protocol, ‘C Language’ and ‘JavaScript’ languages are supported. And we shall select ‘C Language’ here.

Other properties are self-explanatory. 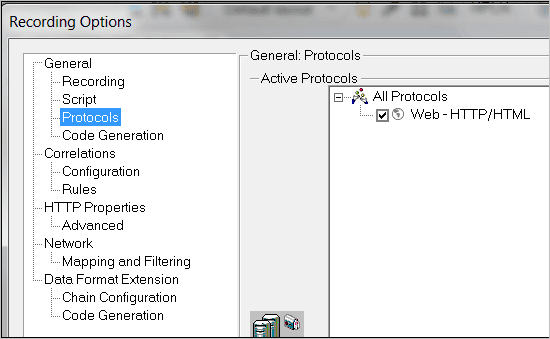 This option shows the protocol(s) that was/were selected to record the script. We can select-deselect accordingly. 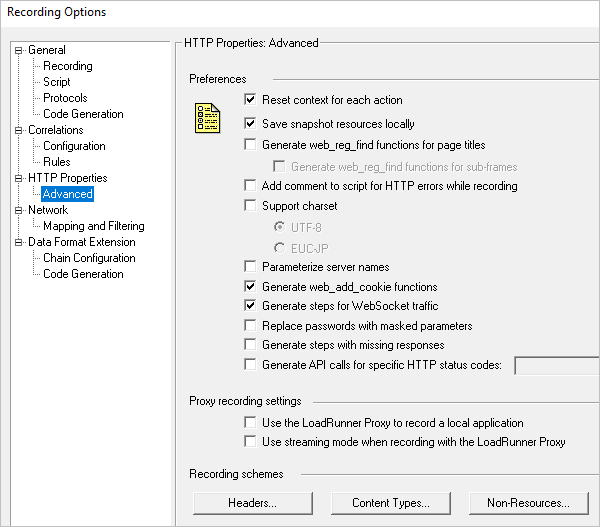 This page offers various options to help customize the code generation and replay.

Let’s understand some of these options.

Reset context for each action – This option resets all HTTP contexts between actions so that the Vuser more accurately emulates a new user by beginning a browsing session. This option ensures that a context-less function is always recorded at the beginning of the action. It also clears the cache and resets the usernames and passwords.

The other options can be left to default.

This allows us to select one of the 3 Capture levels:

In Socket level recording, the native Socket API developed by Micro Focus (for Loadrunner) is used to interact with (and record the requests/traffic) the various application-level protocols like HTTP, FTP etc. Port mapping is relevant here.

In the WinINet level recording, the WinINet API developed by Microsoft (for Windows) is used to interact with (and record the requests/traffic) the various application-level protocols at a specified port (port mapping is not relevant here).

If we select WinINet level, LoadRunner records traffic that is generated by the application which uses the WinINet API to communicate to the servers. If we select Socket level, Vugen captures the traffic on the socket-level at a specified port.

It is not an easy answer to say which one of these to select when recording the script. It is better to use trial and error method – if the script is not recorded, switch between these options until we succeed. 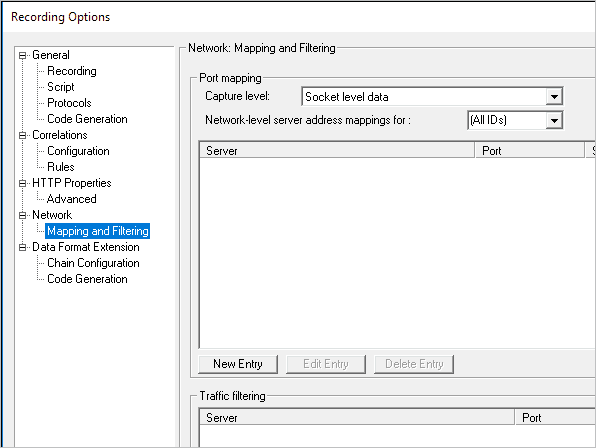 Also, the ‘Options’ button takes us the Advanced Port Mapping settings which allow us to select the SSL versions etc. but most of the times we do not worry about these options. 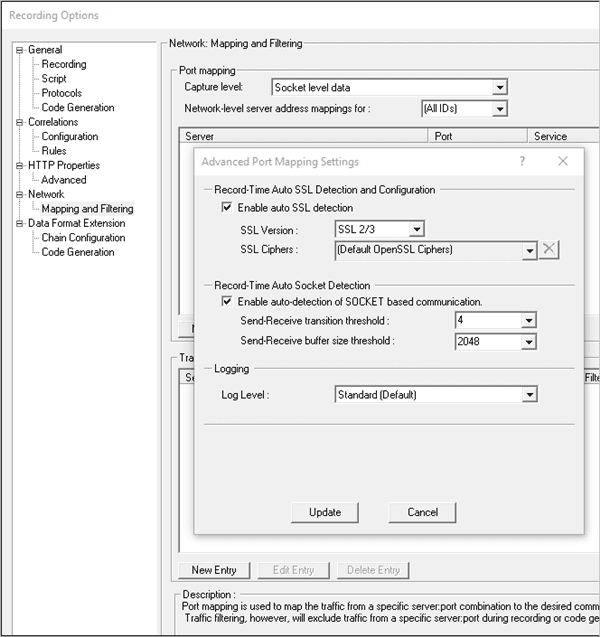 This video tutorial will give an overview of VUGen Script and Protocol Recording Options in detail.

This tutorial covers the VuGen Recording Options. Apart from this, it also covers:

In Script Section, we discussed three sections of the script (vuser_init, Action, vuser_end) and running sequence.

On New Virtual User Dialog, we try to touch base with all the fields and their importance so that while selecting the protocol for scripting, user should know its significance. This is the first step for script creation. VuGen provides option to create Single Protocol and Multiple Protocol script.

On Start Recording Dialog, we discussed the fields with their valid input data. This is second step for script creation. From this dialog type of application, browser, URL, working directory, and “Record into Action” options are selected.

In Recording Option, we covered the following topics in detail:

Protocol – This displays the protocol that we selected on New Virtual User Dialog box.

In the part-1, we have seen script sections and different dialog.  For Recording options, we have seen how to select scripting language and confirm the protocol that is going to be used while scripting.

We will see the remaining Recording options in part 2 below.

This tutorial covers the remaining Recording options. In part-1 we have seen Script and Protocol. The other options are:

The part I and II tutorials explain all important fields on different dialog boxes related to recording options and protocol selection which user should know before using LoadRunner. This will make you ready for recording a script with all the required information  for VuGen configuration.

In this tutorial, we discussed the ‘Recording options’ (options that are relevant for recording the script).

We shall discuss ‘Recording options part 2’ when we discuss ‘Correlation’ in our upcoming tutorial of the series.