The more focused process and testing will allow less buggy software in the market.

Defect Prevention is much more efficient and effective in reducing the number of defects and also is very cost effective to fix the defects found during the early stage of the software process. Most of the organizations conduct Defect Discovery, Defect Removal and then Process Improvement which is collectively known as a Defect Management Process. 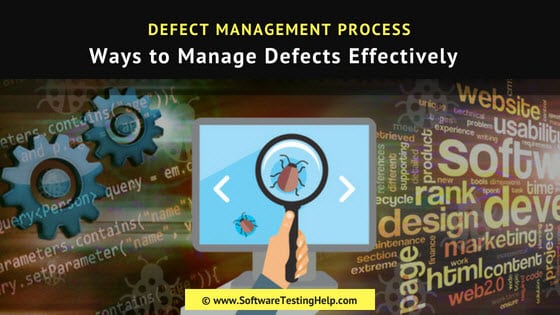 Given below are the various goals of this process:

Before exploring the Defect Management Process, let us first understand what actually a defect or bug is?

When the testing team executes the test cases, they come across a situation where the actual test result is different from the expected result. This variation is termed as a Defect.

Basically, a Software Defect is a condition which does not meet the software requirement. The defect is an error or a flaw which produces an unexpected or incorrect behavior in the system.

Just imagine, what will happen if the testing team reports the defects verbally and the development team also updates the status of defect verbally? The process will be more complicated as these defects include all defects like actually fixed and working as expected, fixed but still not working, rejected, postponed and the process goes on.

In the above case, as the numbers of defects get increased and communication is performed verbally, the situation will soon be very worst. In order to control and handle the defect effectively, you need proper Defect Life Cycle.

Defect Life Cycle ensures that the process is uniform and standardized. A defect attains different states in the life cycle. After a defect has been found, it goes through various stages during its lifetime and it is commonly known as Defect Life Cycle.

Generally, Defect life cycle starts from the stage when the defect is found or raised by the testing team and ends when a defect is closed either by ensuring that it’s not reproducible or rejected by a development team. The number of states that a defect goes through varies from project to project.

The below defect life cycle covers all possible status:

A well planned and controlled Defect Life Cycle gives the total number of defects found in a release or in all releases. This standardized process gives a clear picture of how the code was written, how properly the testing has been carried out, how the defect or software has been released, etc. This will reduce the number of defects in production by finding the defects in the testing phase itself.

Defect management process is explained below in detail.

However, it is not possible to remove all the defects but at least you can minimize the impact of the defect and cost to fix the same.

The major steps involved in Defect Prevention are as follow:

So during unit testing, if the developer finds some issues then it is not called as a defect as these issues are identified before the meeting of the milestone deadline. Once the coding and unit testing have been completed, the developer hand-overs the code for system testing and then you can say that the code is “baselined” and ready for next milestone, here, in this case, it is “system testing”.

Now, if the issues are identified during testing then it is called as the defect as it is identified after the completion of the earlier milestone i.e. coding and unit testing.

Steps involved in Defect Discovery are as follows:

The steps involved in the defect resolution are as follows:

Though in the defect resolution process the defects are prioritized and fixed, from a process perspective, it does not mean that lower priority defects are not important and are not impacting much to the system. From process improvement point of view, all defects identified are same as a critical defect.

For process improvement, everyone in the project needs to look back and check from where the defect was originated. Based on that you can make changes in the validation process, base-lining document, review process which may catch the defects early in the process which are less expensive.

The Defect Management Process should be followed during the overall software development process and not only for specific testing or development activities.

If a defect found in the testing phase then a question can be raised that if the defect is caught in this phase then what about the other defects that are alive in the system which may cause system failure if it occurs and is not yet discovered.

So all processes like review process, static testing, inspection, etc., need to strengthen and everyone in the project should be serious about the process and contribute wherever necessary. Senior management in the organization should also understand and support the defect management process.

Testing approaches, review process etc., should choose based on the project objective or organizational process.

Hope this informative article on Defect Management Process is of immense help to you.