Learn about the PL SQL Transactions with examples of COMMIT, ROLLBACK, and SAVEPOINTS statements:

In this article, we will continue with PL/SQL series. In the PL SQL Package tutorial, we have learned about Package, its advantages, specifications, and structure.

We will also learn about LOCK TABLe and AUTOCOMMIT statements in PL SQL.

Let’s begin with the discussion!! 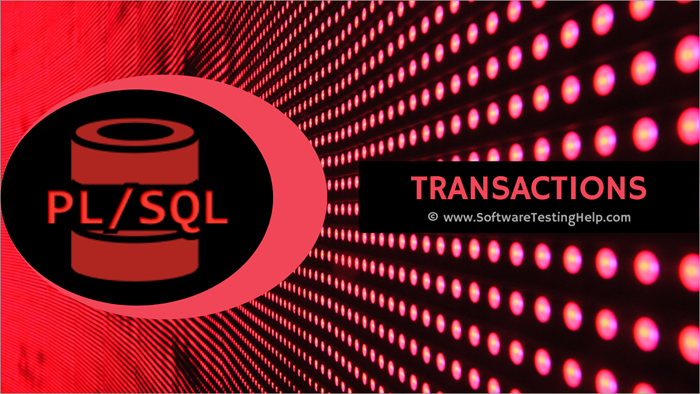 A SQL statement needs to be committed otherwise it can be rolled back and all the modifications that the SQL statement was supposed to do, remain undone. If the PL/SQL program gets halted in the midst of the transaction, there is no impact to the database and it gets restored to its original state.

COMMIT and ROLLBACK take care of the fact that the changes to the database are either everlasting or undone. SAVEPOINT statement points to the present position in transaction processing.

Every transaction has a start and a termination.

Each PL/SQL program should have a COMMIT or ROLLBACK statement. It solely depends on the programming logic whether we should use a COMMIT or a ROLLBACK after the transaction.

If COMMIT or ROLLBACK statements are not used, it depends on the host environment how the final state of the database should be. For example, in a SQL*PLUS environment, if a PL/SQL block of code is without a COMMIT or ROLLBACK statement, the state of the database will depend on the block of code that is executed right after that.

Thus a transaction can be ended because of any below scenarios:

COMMIT statement is capable of terminating the present transaction and making a permanent modification as performed by the transaction. Once COMMIT is executed, we can get hold of the modified data.

As the COMMIT statement is run, all the impacted rows of the table get released from locks. It also helps us to get rid of the SAVEPOINT. A COMMIT statement can be optionally accompanied by WORK statement [COMMIT WORK] which is added only to improve the code readability.

We have created the TEACHERS table with the help of the SQL statement given below:

Insert values to this table and then commit the transaction in the following way:

If a present transaction is ended with a ROLLBACK statement, then it will undo all the modifications that are supposed to take place in the transaction.

A ROLLBACK statement has the following features as listed below:

Syntax for transaction ROLLBACK with SAVEPOINT:

Here, the save_n is the name of the SAVEPOINT.

Let us consider the TEACHERS table we have created earlier.

Output of the above code should be:

In the above code, we have executed a DELETE statement which is supposed to delete the record of the teacher with CODE equal to 3. However, because of the ROLLBACK statement, there is no impact on the database, and deletion is not done.

SAVEPOINT gives name and identification to the present transaction processing point. It is generally associated with a ROLLBACK statement. It enables us to revert some sections of a transaction by not touching the entire transaction.

As we apply ROLLBACK to a SAVEPOINT, all the SAVEPOINTS included following that particular SAVEPOINT gets removed [that is if we have marked three SAVEPOINTS and applied a ROLLBACK on the second SAVEPOINT, automatically the third SAVEPOINT will be deleted.]

A COMMIT or a ROLLBACK statement deletes all SAVEPOINTS. The names given to SAVEPOINT are undeclared identifiers and can be reapplied several times inside a transaction. There is a movement of SAVEPOINT from the old to the present position inside the transaction.

A ROLLBACK applied to a SAVEPOINT affects only the ongoing part of the transaction. Thus a SAVEPOINT helps to split a lengthy transaction into small sections by positioning validation points.

Here, save_n is the name of the SAVEPOINT.

Let us again consider the TEACHERS table we have created earlier.

Code implementation of ROLLBACK WITH SAVEPOINT:

Output of the above code should be: 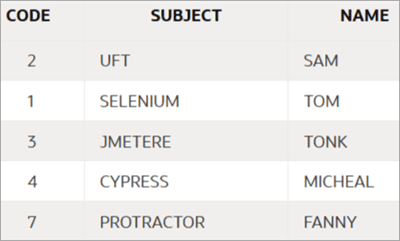 In the above code, after ROLLBACK with SAVEPOINT s is applied, only two more rows got inserted, i.e. teachers with CODE 4 and 7, respectively. Please note teachers with code 1, 2, and 3 have been added during the table creation.

LOCK statement in PL/SQL enables locking of the full database in a locking mode. This determines if we want to share or disallow access to the table.

Let us take an example of a lock table:

The above query locks the TEACHERS table in row share mode. A row share mode gives permission for a concurrent usage to a table. It does not allow users to lock the full table for individual use. After the execution of a COMMIT or ROLLBACK, the table locks are released. NOWAIT keyword is used to mention that the database is not allowed to wait for a lock to be freed.

The lock mode is important to conclude what other locks can be applied to a table.

Let us discuss some LOCK modes available in PL/SQL:

We can do configuration such that a COMMIT statement gets executed by default whenever an INSERT or DELETE statement is run. This is done by making the AUTOCOMMIT environment variable to ON.

Again, this can be turned off by making the AUTOCOMMIT environment variable to OFF.

Q #1) What is the transaction in PL SQL?

Answer: A transaction is a group of SQL data computation statements that work as an atomic unit. All the transactions are atomic in nature, which are either committed or roll backed.

Answer: A transaction terminates with a COMMIT or ROLLBACK statement explicitly. It can also be ended unconditionally after a DML statement is run.

Answer: Yes, we can commit in trigger only if that trigger transaction is standalone from its parent transaction.

Q #5) Is SELECT a transaction?

Q #6) How do I rollback a transaction in Oracle?

Answer: We need to run a ROLLBACK statement to rollback a transaction in Oracle. It shall undo all the changes made by the transaction to the database and shall be restored to its original state.