In this tutorial, we will learn what is a PL SQL Cursor and related concepts like Implicit and Explicit Cursors, cursor for loop, etc. We will also learn about String Functions in PL/SQL:

In the PL SQL Collections tutorial of the PL/SQL series, we learned about Collection Methods, Varray, Nested table, and Associative Array with the help of code examples.

Also, we shall discuss strings and some of the inbuilt string functions available in PL/SQL. 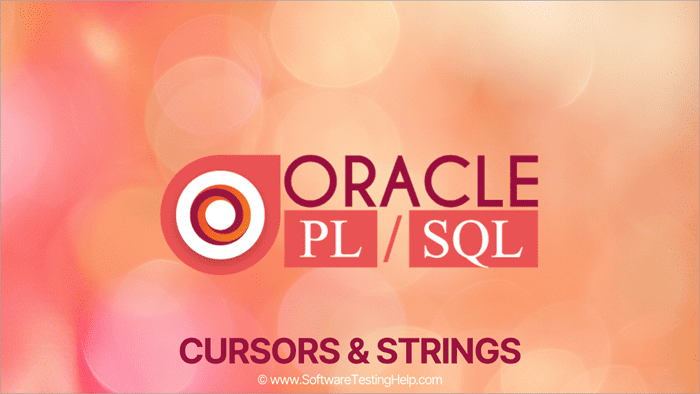 Oracle has dedicated memory locations for executing SQL statements and then it holds that processed information, for example, the total number of rows updated.

A cursor in PL/SQL gives a name and acts as a pointer to the area of work called a context area and then uses its information. It keeps the number of rows processed by the SQL statement. These rows are called as an active set. The size of the active set is equal to the count of the rows that meet the condition.

There are two types of cursors which are listed below:

While we are inserting a row, the cursor keeps that particular data. Similarly, for deletion and updating operations, the affected rows are stored by the cursors. The implicit cursors are not given any names and hence cannot be manipulated by the developers and the data contained on it cannot be used anywhere.

The latest updated cursors can be used with the help of cursor attributes. These attributes are the properties that help to refer to the data type and structure of items without repeating their definitions. All the columns and tables in a database have a common attribute (represented by % sign) characteristics and they can be used as sql%attribute_name.

Let us consider a table which is named TUTOR.

We have created a table with the SQL statement given below:

Inserted values to this table with SQL statements given below:

Code implementation with the implicit cursor: 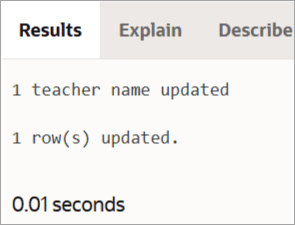 Let us now verify the changes reflected in the table named TUTOR.

We are using a SQL statement to get the columns of the table: 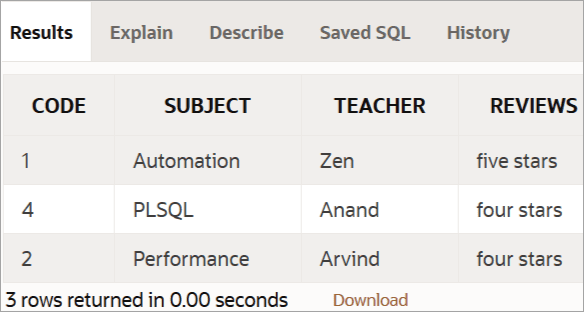 Thus we see that as pointed by the cursor, the name of the teacher with code = 1, gets updated to Zen.

The developers can have their own user-defined context area to run DML operations. Thus they can exercise more power over it. The declaration section of the PL/SQL block of code contains explicit cursors. It is normally built on SELECT operations that fetch multiple rows.

Explicit Cursor works on the processes listed below:

#1) Cursor declaration for memory initialization. Here, a named context area is created which serves as a cursor name.

#2) Cursor opening for memory allocation. A cursor is now available for fetching the updated rows from the database.

#3) Cursor is fetched for getting the data. After the SELECT operation is done, the rows obtained are put in the memory allocated and these are now considered as active sets. The cursor can access one row at a time.

#4) Cursor is finally closed to free the allocated memory. As all the records are obtained one by one, the cursor is closed to release context area memory.

While working with explicit cursors, we can use FOR loop instead of using statements like FETCH, OPEN, and CLOSE. Cursor FOR Loop has the loop index as a record which points to the row obtained from the database. Next after opening the cursor, it fetches the multiple rows of data repeatedly from the result set into the record fields.

Finally, the cursor is closed after all the rows are obtained. We use a dot (.) sign to refer to each field in the record. (.) dot sign is actually used for selecting a component.

The syntax for Cursor For loop:

Here, the Cursor FOR loop declares ‘Tutorial_rec’ as a record.

A cursor variable is used to refer to the present row in the result set that has more than one row. It can be used for any type of query. It is similar to a variable of PL/SQL, where we can assign values and can be passed via a subprogram in the database. Thus cursor variables provide a lot of flexibility and data can be obtained in a centralized process.

There are three categories of strings in PL/SQL. These are listed below:

The strings in PL/SQL can be either literals or variables. Quotation symbols are used for literals.

Also, we have the option of adding a quote within our string literal. This is achieved by keeping two consecutive single quotes.

We can describe user-defined delimiters for string literal by prefixing it with a ‘q’ letter.

There are multiple data types in PL/SQL like NCHAR, CHAR, VARCHAR, VARCHAR2, CLOB and NCLOB. The national character set data types are prefixed with N. They are used for storing Unicode characters.

In a variable length string, the maximum limit of the string length should be mentioned.

This means that the variable subject is capable of holding up to 10 characters and not more than that. In the case where the maximum length is omitted, compile error is thrown.

If you declare a CHAR variable with the length exceeding 1, Oracle by default pads the value that we have stored to that variable with spaces. This is done until the specified maximum length is reached.

To make a declaration for a character large object, CLOB is used. The maximum length need not be mentioned here and the length is set by the Oracle database itself and is dependent on the size of the database block. 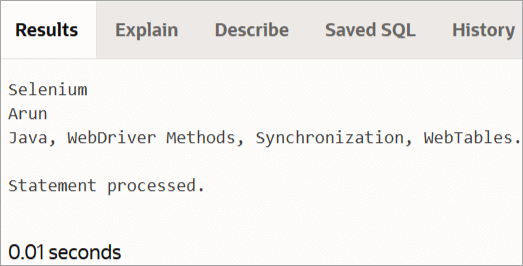 PL/SQL Functions And Operators In String

Code implementation with some string functions: 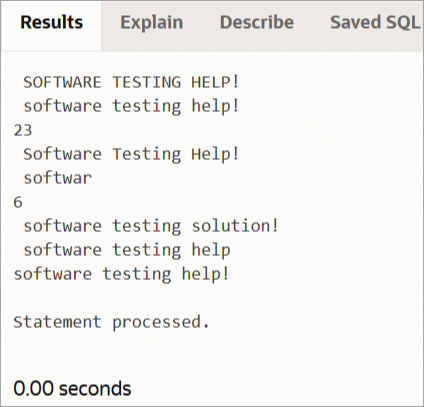 Explanation of the above code:

Answer: After an SQL statement is executed, the Oracle database builds a memory called context area. A cursor has the information processed from a select statement and contains the rows updated by that SELECT operation.

Answer: After an SQL statement is executed, the Oracle database builds a memory called context area which is a temporary work area. There are two categories of cursors – Implicit cursor and Explicit cursor.

Answer: To run a cursor in Oracle, the syntax is: OPEN <<CURSORNAME>>. The CURSORNAME refers to the name of the cursor available in the declaration section of the PL/SQL block of code.

Q #4) Can we declare cursor inside begin?

Answer: Yes we can declare more than one cursor within a PL/SQL block of code.

Answer: We can find the length of a string in PL/SQL with the help of function LENGTH(str). Here str is the string for which we want to get the length. This function returns a numeric value.

Answer: The SUBSTR function gives a particular number of characters from a specific position of a string. The syntax is SUBSTR(n, start, l). It returns a substring from the string n that starts from the position mentioned in start. The parameter l is optional and represents the length of the substring.

In this tutorial, we have discussed in detail some of the basic concepts of PL/SQL.

We have covered the following topics listed below: