Learn all about Triggers in PL SQL, their types, usage and advantages:

In the PL SQL Transactions tutorial of the PL/SQL series, we have learned about COMMIT, ROLLBACK, and SAVEPOINTS statements.

In this article, we will explore triggers in PL SQL and their advantages, types, and usage. We will discuss how to create, trigger, enable, and disable PL/SQL Triggers with the help of example programs.

Let’s begin with the discussion!! 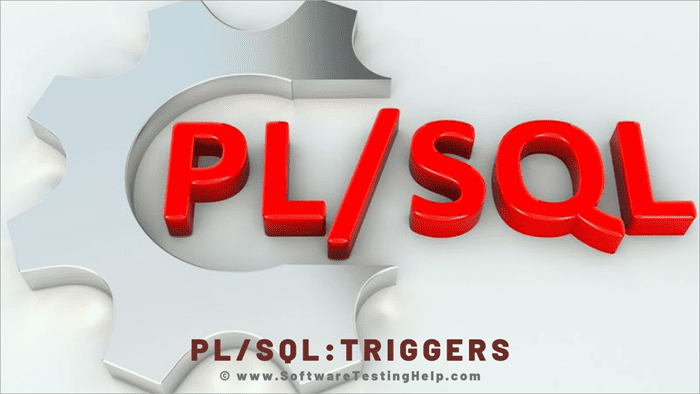 A stored program that is fired by default or by some events is called a trigger.

A trigger is executed due to the following circumstances listed below:

A trigger can be set on a schema, view, or database that has an event attached.

These are listed below:

These are listed below:

Types Of Triggers In PL/SQL

The triggers can be categorized based on parameters. Types of triggers are listed below:

#1) Categorization on the trigger level.

#2) Categorization on the trigger timing.

#3) Categorization of the trigger event.

Syntax for creating a trigger:

Let us again consider a table which is named STUDENT.

Let us now create a row-level trigger for the STUDENT table that would get executed by the DML statement like UPDATE, INSERT or DELETE on that table. The trigger will compute and show the age difference between current and previous values.

Output of the above code:

The above code has some important characteristics. They are listed below:

To fire the above trigger, we need to do any DML operation like DELETE, INSERT or UPDATE on the table. Let us again insert some values in the Student table with the help of the below query:

Once the INSERT operation is completed in the Student table, the trigger age_changes gets executed. 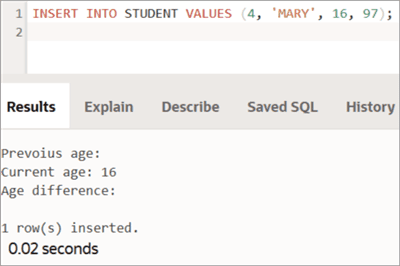 Now, let us modify a record with UPDATE statement with the help of the below query:

Once the UPDATE operation is completed in the Student table, the trigger age_changes gets executed.

The output of the above query: 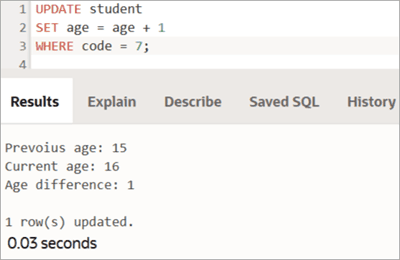 A compound trigger is used to define the operations for all the timing points within the trigger body. It gives the provision to merge all the actions at different timings within one trigger body.

The various timing points are listed below:

We can enable and disable a trigger with the help of a DDL statement ALTER.

Here, trigger_n is the name of the trigger that we want to enable or disable.

Now let us disable the trigger with the help of the below query: 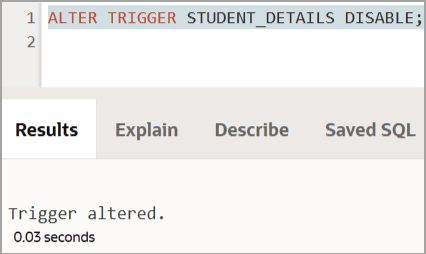 Now let us enable the same trigger with the help of the below query: 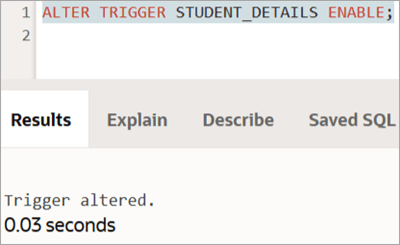 Q #1) How many types of triggers exist in PL SQL?

Q #2) Which type of trigger uses the old and new qualifiers?

Q #3) What is the difference between trigger new and trigger old?

Answer: A row-level trigger gets triggered for a row only once due to an event. For example, if deletion is considered as a triggering event for a table, a delete statement is affecting two rows, then the trigger shall be fired two times.

Q #5) What is a trigger? Explain with an example.

Answer: A trigger is a stored procedure that gets fired by default if an incident occurs in the database. For example, if a row is inserted into a table or we are modifying some values in the table.

Q #6) What are the after triggers?

Answer: The after triggers are fired post the execution of a DML statement but prior to the commit to the database. It is also capable of rolling back its action.

In this tutorial, we have discussed some basic concepts of Triggers in PL SQL that are essential to use them while programming. We have covered the following topics listed below: