An interface is basically the connection between two software systems and testing that connection for data transfer is called Interface testing. The interface covers a wide range of services in the real world, it can be used to refer to Web service, API, etc. 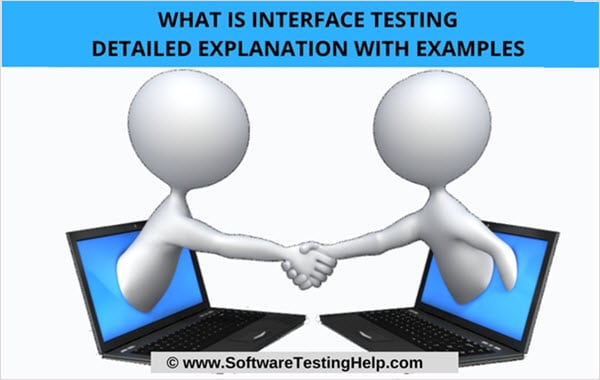 An Interface contains a set of rules, messages, commands etc that facilitates communication between two systems.

This testing mainly concentrates on testing of two major segments:

Interface test is performed to evaluate the above-mentioned scenarios to validate whether the components are correctly passing the control and data to one another correctly. It also verifies the interaction between different modules.

Why is Interface Test Performed?

It is performed to ensure:

Most of the defects found in the user interface testing are due to incorrect mapping of the data between the systems. Hence, most of the bugs can basically be classified into the following categories.

How is it Performed?

It can be mainly categorized into the following phases:

In all these testing scenarios, interface test is performed based on the business requirements and business flow rules.

Let’s say we have an application where we have different databases interacting with each other.

In this example, we will consider two database interaction through an interface channel.

Let’s consider there are two databases or application, database A and B. “A” transfers some data to “B”, which is then used by B to perform some operation. After performing a certain operation on the incoming data B inserts that data into the database and creates an output JSON for confirmation with the list of updated data and sends it back to A.

Both A and B use interface channel for communication between them.

“A” contains employee data for all the employees belonging to the finance department.

The data needs to be ported to “B” on a daily basis. “B” contains data about general employee details. All the data from “A” needs to be transferred to a particular table and column of “B”. Other than the entering data “B” also needs to sort and organize data. It also needs to make sure whether the data has been entered against the correct employee.

In case of any discrepancy in JSON schema or missing data “B” will not process the data and it will send a Reject JSON message with the reason for rejection.

To test a scenario like this one, we will need a test stub to mimic database “A”. The developer can provide a location where you can either dump your test JSON or a mock UI and paste your JSON data and invoke the processing through the interface. For testing purpose, we can also have an output location where we can receive the confirmation JSON from “B”.

Once the test environment has been set up, the next step is to create the test data.

While creating test data (read test JSON) we should keep a few things in mind:

Let’s have a look at the sample test JSON we will use for testing:

Once you have created your test JSON file, drop it at the pick-up location. The service will pick this up and post it into database B.

There can be a number of scenarios that need to be tested for this example like:

At first, we will check if the test JSON file has been picked up from the location or is not present at the location. This will validate the working of the service. Next, we will navigate to the output folder to view the output JSON. Presence of output JSON validates if the input data has been sent to database B and acknowledgment for the same has been received.

The next part of testing comprises of validating the data entered into the database.

Let’s say we have EmpDetails table where the data has to be inserted. So, we will run a query to validate the data.

In the above case the data from the JSON is being stored in more than one table in the database, hence you can use SQL JOINS to fetch all the desired data.

The third step in testing will be to test the negative scenarios.

Some of the negative scenarios that can be tested are:

In all these cases, the system should be able to handle these scenarios and no data should be inserted into the system as per the business rule.

The connection channel between two systems through which data is transmitted is called an Interface and Interface testing mainly works around the testing of these connections. Most of the interfaces make use of Web Service or APIs. It doesn’t always have a UI but it does accept input and provide output.

A tester needs to have basic JSON structure knowledge to create test data (in the form of JSON) and to read output data from the system. A tester should also be well-versed with the mapping between JSON keys and database table-column.

Any tester who wants to work on Interface testing should have a clear knowledge about the business guidelines and the rules of an application. A tester should also have adequate knowledge about the database and should be able to write simple SQL queries.

For any question or clarification please do get in touch with us in the comment section.