Software Tester’s Job – Is it really as low-profile as it is believed to be?

Sometimes, the decision to become a Software Tester is not a deliberate one for some of us, especially at the beginning of our careers.

Though the desire to be a successful IT professional is strong, we assume that the term ‘IT professional’ is synonymous with ‘Developer’. While being a developer is great and has immense potential, it should not be concluded that being a tester means the exact opposite. 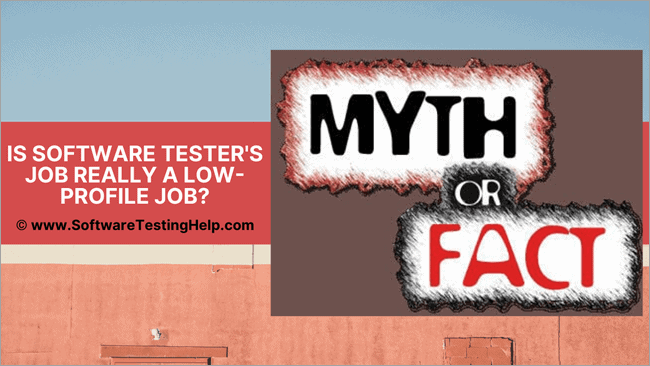 When a testing opportunity presents itself, there are many doubts in our minds and we often wonder whether it’s the right career move or not.

These are some of the Myths that may be in the minds of beginner-level IT professionals:

Myth #1: No application of Engineering knowledge
Myth #2: Limited scope for learning
Myth #3: Credit not given to the testers for the final software product
Myth #4: Pay for developers is higher than for testers

None of which are true. Let me explain why:

Myth #1: No Application Of Engineering Knowledge

Myth #3: Tester Gets No Credit For The Final Software Product

Note: Not to forget that ambition and aptitude are critical drivers. Some of us want to excel in certain fields and have set certain goals for ourselves. If those goals happen to fall outside of the Software Testing field, then so be it. We wish you the best in your pursuit.

We hope that the above myth-busters will reassure those of us who have been plunged into the testing field accidentally or unavoidably that this is certainly not a dead-end but a fork in the path towards a bright future. In fact, this might be one of those accidents to be thankful for.

In the comments, let us know how many of you are accidental testers and how you like the QA field now. Do you agree with our list and explanations?

90 thoughts on “Is Software Tester’s Job Really a Low-profile Job?”