Mobile Performance Testing is nowadays very popular among the websites who try to make their presence on mobile and portable devices.

This tutorial will help you to answer this and it too brings your attention to BlazeMeter – an emerging tool in Mobile Performance Testing.

The tutorial will touch the key features of BlazeMeter and important information to know about it before starting to using it. 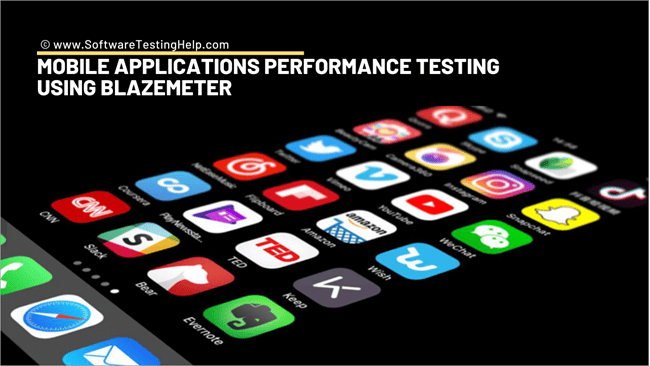 By the end of the tutorial, you will able to know how far BlazeMeter meets your expectation of doing Mobile Performance Testing.

After knowing about performance testing, the next thing that comes to our mind is

Why do we need performance test?

So Performance testing is required to

Why is this so?

Let’s see. Some of the below facts indicate a use of mobile is increasing day by day and it is becoming part of our life now

(These statistics are from stickyminds.com) 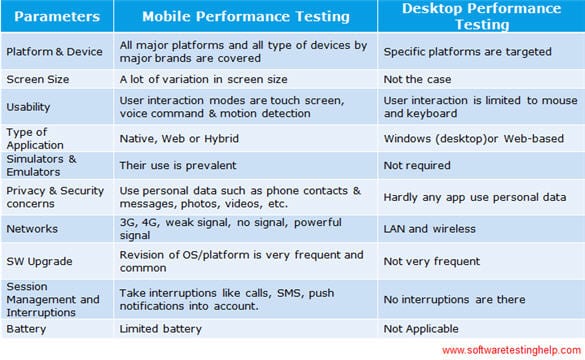 Mobiles have a variety of platform running on different devices. It is ensured that all major platforms and all type of devices supplied by major brands are covered. In the desktop, specific platforms are targeted.

Mobiles have lots of variation in screen size which is not the case for desktops.

In a desktop, user interaction is pretty much limited to the mouse and keyboard whereas in mobiles user interaction modes are a touch screen, voice command, motion detection and these are more complex and difficult to simulate.

For mobile testing, use of Simulators & Emulators is prevalent but they are still not a true representation of the devices.

Most of the mobile applications use personal data such as phone contacts & messages, videos, photos and it is assumed that applications are secure and they are not accessing the data intentionally. It is also assumed that they will not share those details further.

In mobiles, revision of OS/ Platform is very common and this affects the performance of a mobile app.

Apps and users are constantly interrupted by calls, SMS, push notifications, etc. In mobile testing, we too have to take them into the account.

The battery which is not-at-all in the picture for desktop plays an important role in mobile performance testing. It’s good to see the application performance on varying battery state. 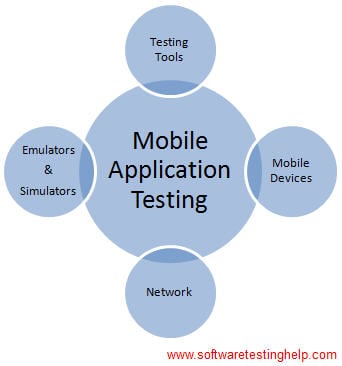 These are major components of Mobile testing are

1) Emulators and Simulators- Mobile emulators are software platforms, installed on a laptop or desktop, that imitates a mobile platform or OS environment from the point of view of the application running on the OS. In other words, apps think they are running on a real phone, not a PC.

These are not the true representation of mobile although it helps a lot in cost-cutting.

2) Mobile Devices – Real-time testing requires real devices and there are few scenarios which are not possible on emulator e.g. how the apps behave when it is interrupted by a call or SMS.

3) Tool Selection – Selection of Right tool is the key of Mobile Testing.

4) Network – Real user uses a network which keeps changing according to the signal. It is important to simulate different networks with different bandwidth limits.

Here are the key features of BlazeMeter:

The key features of JMeter are: 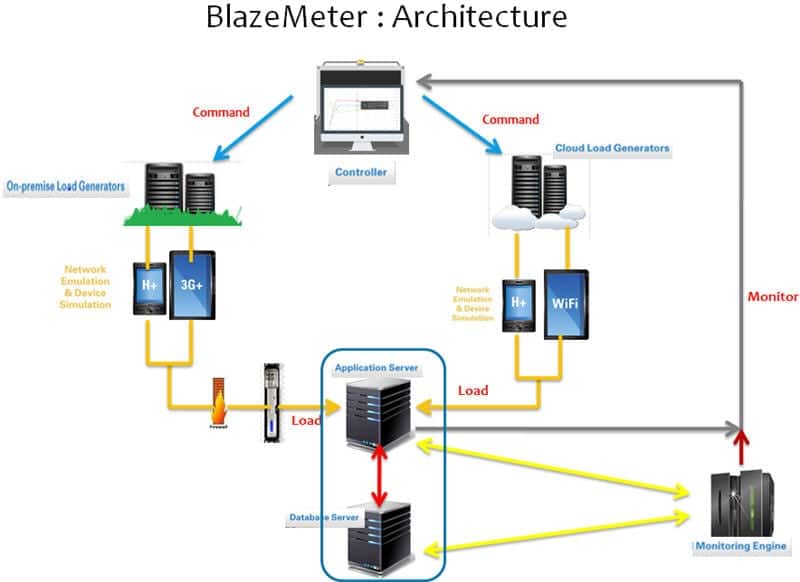 FollowMe is the unique feature of BlazeMeter. It is being advertised by BlazeMeter with the punch line “No Scripting. No Recording. Just Testing“. 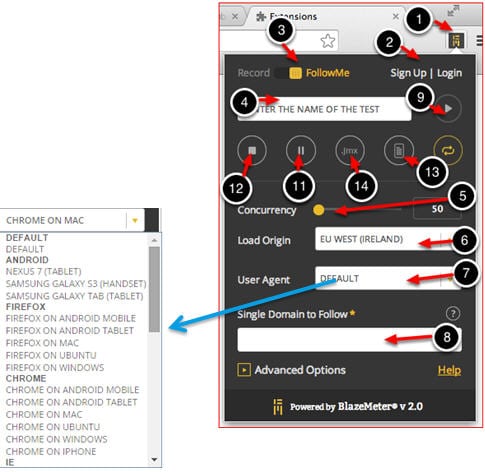 (Note: This graph is from BlazeMeter)

Here is the GUI of Follow me. This is Chrome plug-in and once installed can we see on the right-hand side of the browser.

Follow the number flow to run the test. Refer above figure in step 7 we can select the User Agent. I have taken the snapshot of the options coming in the drop-down for User Agents.

After hitting Start button (step-9), all the concurrent users will be ready to follow our steps. Whatever step we will perform on the browser, all of them will do it. On runtime, we can pause or stop the test. We can also see the test report and export the user activity to JMeter script. 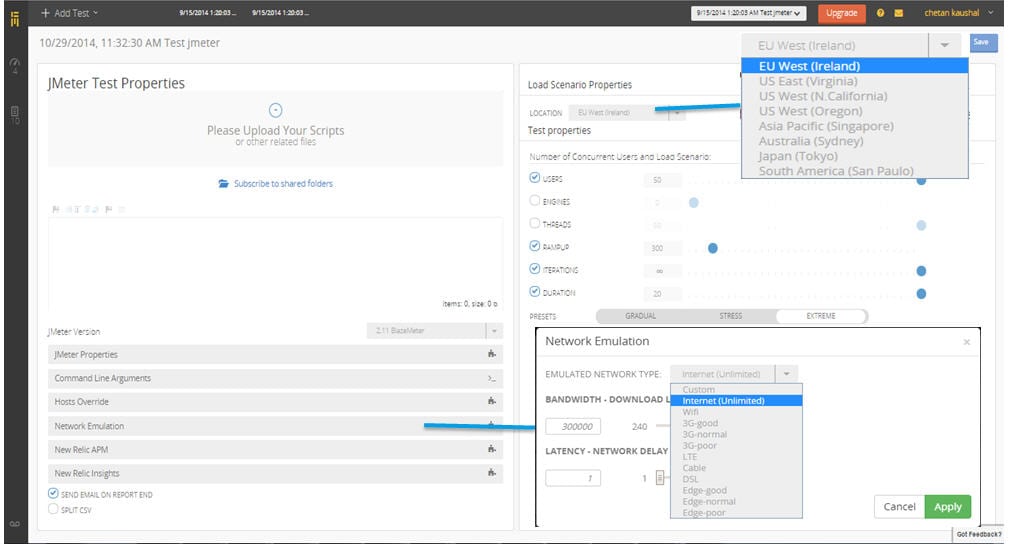 This is the BlazeMeter scenario creation page. The load test scenario is designed from here. Under JMeter Test Properties section, JMeter scripts are uploaded. As BlazeMeter provides an option to run JMeter script of any version, we have to select JMeter version used to create the script.

If there is any command line argument, it can also be passed to the scenario. Through Host Override, Vusers is guided to generate load using unique IP address.

Network emulation section helps in configuring network settings. For better understanding, the snapshot of the same section is kept on the bottom right-hand side. From this section, we can select the network, set the bandwidth download limit and latency network delay. This helps in simulating real users.

If we have New Relic account, we can have monitoring eyes on the servers. Options New Relic APM and New Relic Insights are used for the same.

On the right-hand side, we have Load Scenario Properties section. In this section, we have “Location” option which helps in selecting the location from where we want to run the load test. Dropdown list shows the location of load generators in the cloud.

Then we have to configure no of concurrent users, ramp up, duration of the load test. Save the scenario and it`s ready to execute. In the trial version, we can run the test for half-an-hour and it supports the maximum of 50 Vusers. 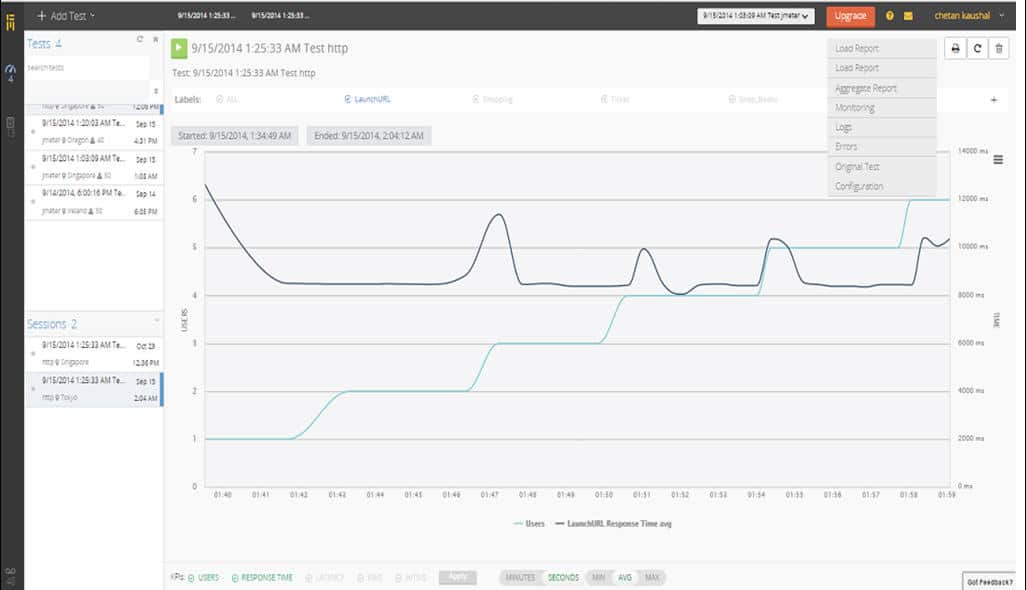 In the above snapshot, we will get the idea about the test results and report. On the left-hand, we have scenario names on the upper side (Test) and test run for each scenario on the lower side (Session). Links above the graph are nothing but transaction names and available to select and deselect with the toggle option. The same toggle options with the user, response time and hit per sec.

On the drop-down at the right top, we can see different reports and logs we can get for the test. Reports and Logs could be Load Report, Aggregate report, Monitoring, Logs, Error logs, Original Test configuration.

HTTP URL test is a new scripting option. We have to keep adding the URLs and request that needs to send to those URLs. A JMeter script is automatically generated from the type of requests provided and during the execution it sends requests to the server sequentially from top to bottom.

As the generated script is similar to any manually created JMeter script, each Vuser follows the sequence of URL in the script and maintains its own browser session, cookies and cache. To render the HTML page as the response to the hit it sent to the server, it downloads all the resources on the web page including CSS files, js files, images and other static content.

In the snapshot above I tried to add 3 URLs of Times of India and these will be executed by a virtual user sequentially – first Home page then World page and then Business page.

We can add four types of requests i.e. GET, POST, PUT and DELETE. For post request, the parameters and their values that we need to pass the script can be identified using any network capturing tool like Fiddler.

Thank you so much for your valuable time to read the article. Hope this article is able to provide a good idea of the tool and reader will definitely give it a try.

In our next article, we will discuss more on Mobile App Security Testing Guidelines.