This Hands-on Tutorial Explains What are .RAR Files and how to Open RAR Files. You will also learn about RAR File Opener Tools:

Each of us might have come across the file format .RAR at some point of time. RAR file formats are useful when we wish to transfer large files over the internet.

We will see the usefulness of the RAR file format, how can we create a RAR file, and also learn how they can be opened while using various operating systems. Towards the end of this tutorial, we will take a look at some of the FAQ’s related to the .RAR files. 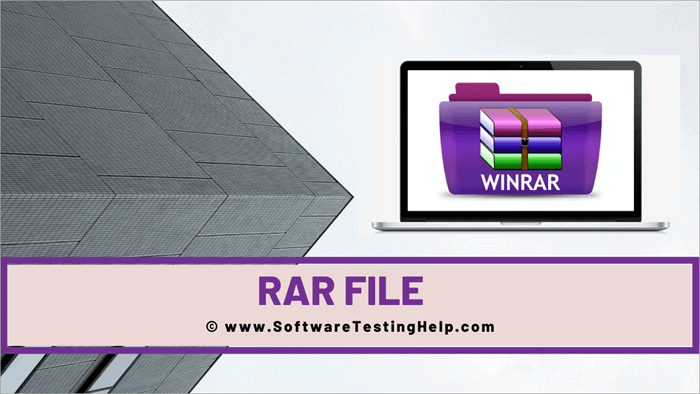 What Is A .RAR File

It is an archive file format that was developed by a Russian software engineer named Eugene Roshal. RAR stands for (R)Roshal (AR)Archive.

You might wonder what is special about this file format when compared to the other common formats that most of us know about Example doc, txt, pdf, or the other archive formats like Zip, 7S to name a few. There are a lot of other things that make this format quite useful.

Let’s look at them:

The below points are worth noting here:

How To Create A RAR File

Creating a RAR file depends on the Operating System that you are using.

Enlisted below is the list of software required to create a RAR file for some of the commonly used Operating System.

The Licensed software generally has a trial version that can be downloaded for a specific number of days before it is purchased and used.

Once you have the Licensed/Trial software downloaded, you would have to install it on your system to create a RAR file. Ahead in this tutorial, we will be demonstrating how to download, install, and use WINRAR (Trial version) to create a RAR file in the Windows 10 operating system.

We shall also cover the steps for using WINZIP to create RAR files on Mac OS. 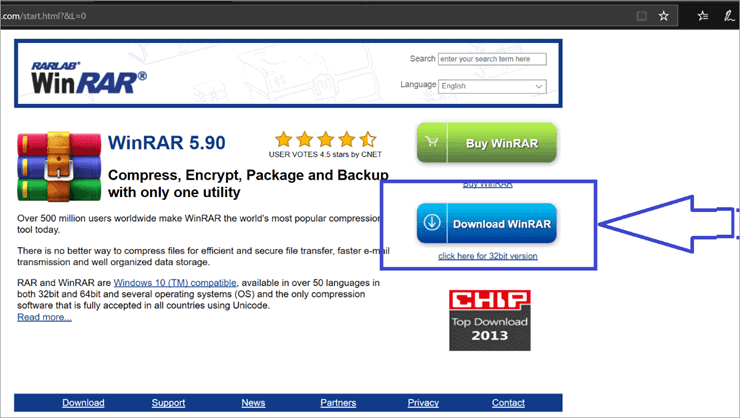 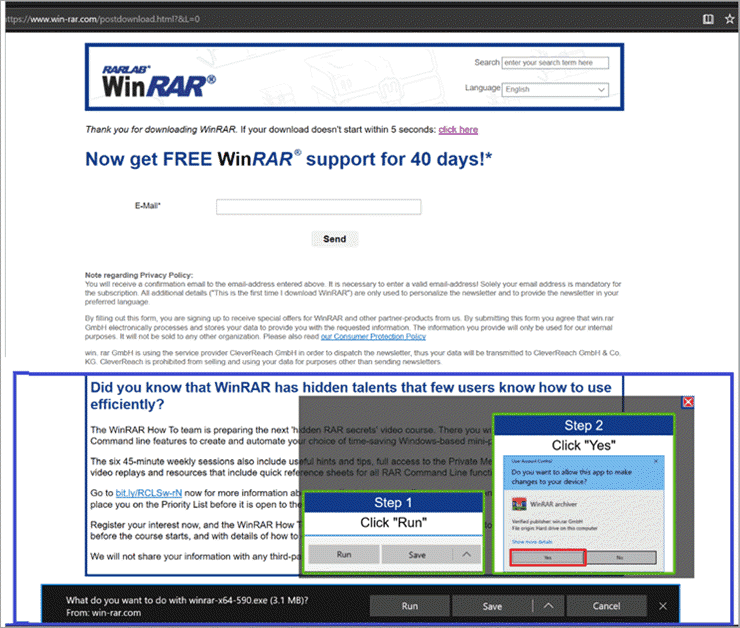 #4) On the pop up displayed, choose the Destination folder by using the ‘Browse’ button. It is the location where the software would be saved. 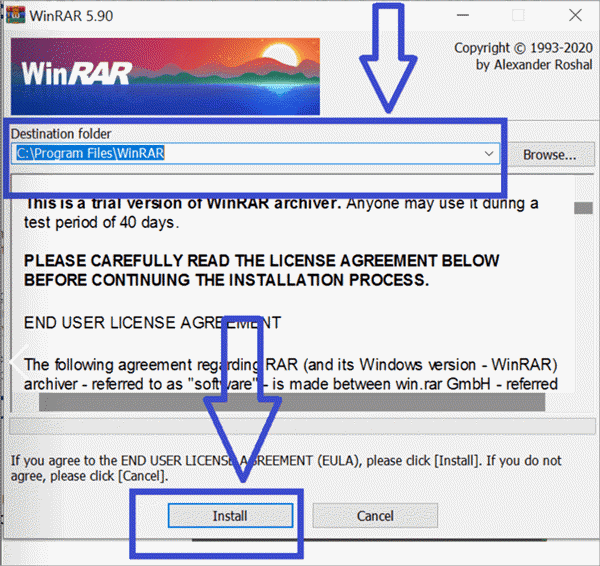 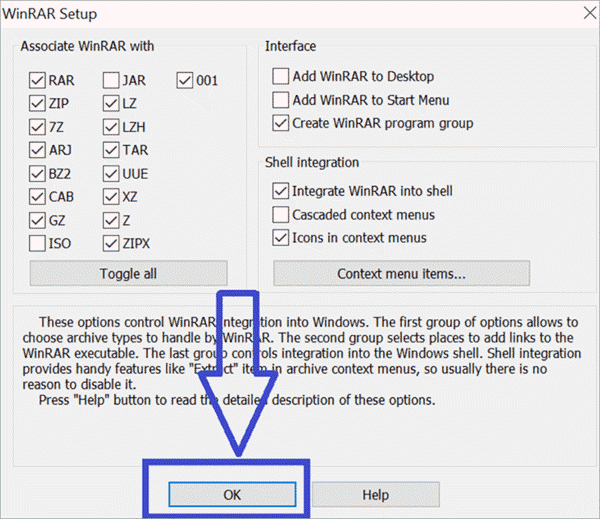 #7) Once installed successfully, you would get the below screen. Click ‘Done’. 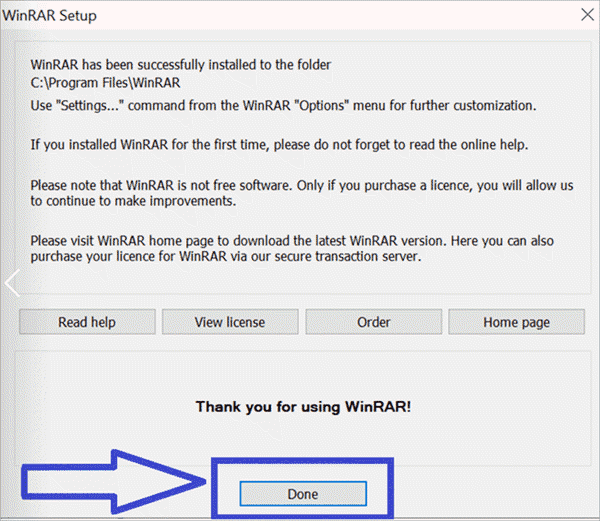 This completes the installation process of WINRAR on Windows 10. We have WINRAR installed on our system, now, let’s take a look at how we can create a RAR archive file/folder.

Now, we have installed WINRAR on our system, let’s try to archive a set of 3 files. In the below example, we have 3-word docs named “Work1”, ‘Work2” and “Work3”. These files are located at “This PC > Desktop > Work Records’ on the system.

Please follow the below steps to see how a RAR file/folder can be created:

#1) Open Windows Explorer and go to the folder location that contains the files that need to be converted to RAR format. In our case, it is ‘This PC > Desktop > Work Records’

#2) Now select all the 3 files (Shift + Click) and right-click to get the menu options. Select the option “Add to Work Records.rar”. This will create a RAR folder grouping all the three selected files in a folder named “Work records.rar” (the same name as the folder in which the three files are currently placed). 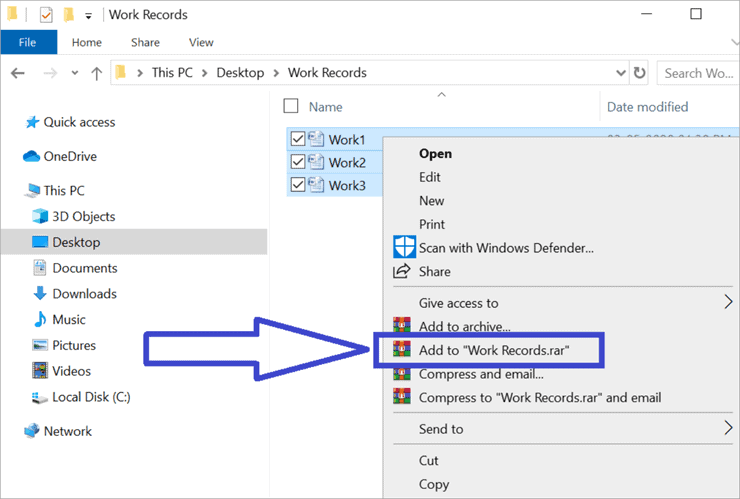 #3) On selecting this option “Work Records.rar” file is generated and placed in the same location as the current files.

#4) In the list we have some more options that can be used to create a RAR file- “Add to archive…”, “Compress and email…” and “Compress to ‘Work Records.rar’ and email”. 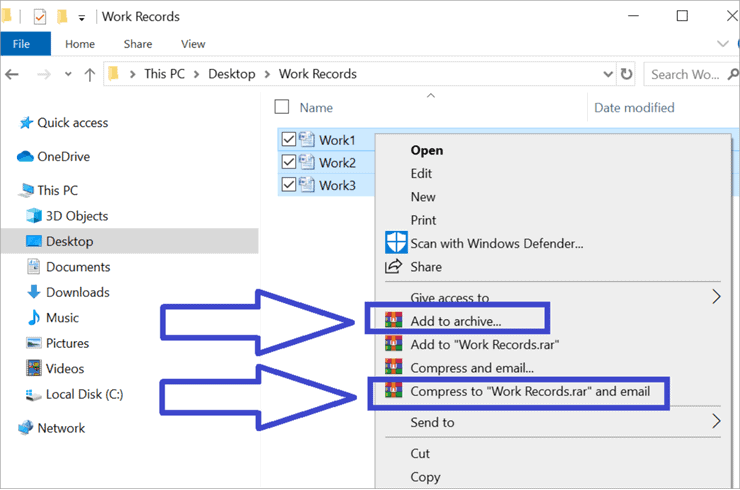 #5) In case we need to change the name and location of the RAR file that we are creating then the “Add to archive…” option can be used. We get the below screen when this option is selected. 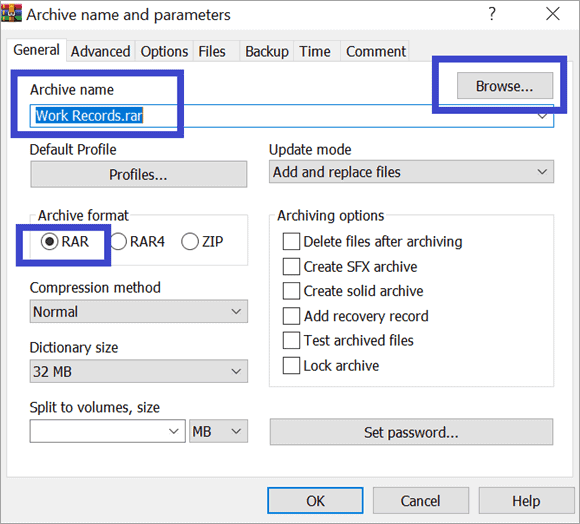 #6) In a scenario where we want to directly create and email a RAR file then the option “Compress to ‘Work Records.rar’ and email” or “Compress and email…” can be used.

Thus, so far we have seen how we can create a RAR file using the WINRAR on Windows.

Although, Mac operating system has Apple’s Archive Utility tool that enables decompressing archived formats like ZIP, GZIP, TAR, etc. It, however, does not have inbuilt support for un-archiving the RAR files.

As in the case of Windows OS, WINRAR is also available for Mac OS but only as a command-line software. There is no GUI version available for WINRAR to access it on Mac OS. Due to the command line (Terminal) version, RAR or Mac lacks user-friendliness. Thus using RAR for Mac is not popular.

In fact, there is very little support in terms of the software available when it comes to creating a RAR file on Mac. SimplyRAR is an open-source utility (GUI based) that can be used to create RAR files on a Mac OS.

However, it is to be noted that the developers of this Utility are no longer providing any support as they probably are not in business anymore. 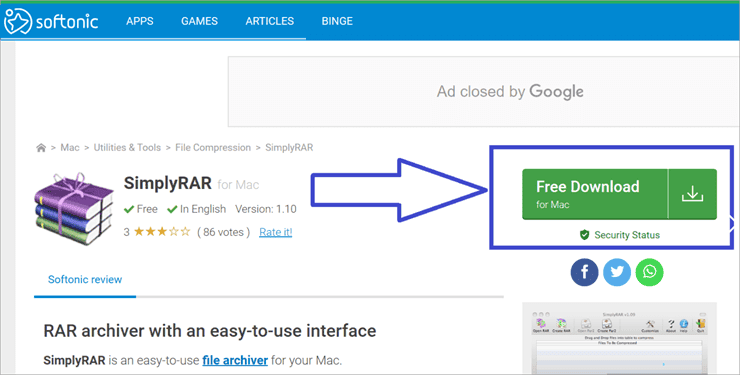 How To Open RAR Files

Just as the software is needed to create a RAR file similarly an external software is required in order to open a RAR file. Neither of the operating systems has inbuilt support for opening the RAR file with the exception of Chrome OS.

Moving ahead with this tutorial, we will take a look at the software availability to open a RAR file on Windows and Mac OS.

After a lot of research and analysis, we have listed below the various utility software and the operating system they can be used for your quick reference. The table also helps you to compare the cost of various utilities along with the file format it supports. The link for their respective downloads has also been mentioned there.

Open A RAR File On Windows

As mentioned above, Windows OS does not have inbuilt support for un-archiving the RAR files. Thus an external tool is required to open RAR files on Windows operating system. We shall see the steps to open a RAR file with WinRAR. WinRAR allows both the operations of archiving and un-archiving a RAR file.

In the previous topic of creating a RAR folder on the Windows operating system, we saw how to download the WinRAR utility software. With WINRAR installed on your system, we shall now see how to open a RAR folder. Let’s try to open the same RAR folder “Work Records.rar” that we previously created.

#1) Open the “Work Records.rar” folder location in the Windows Explorer.

#2) Right-click on the folder and select the option Open with WINRAR.

#3) The WINRAR window opens as seen below.

#4) Select the file(s) and click Extract To and you would get the screen pop up where the destination of the extracted files can be selected as shown below. 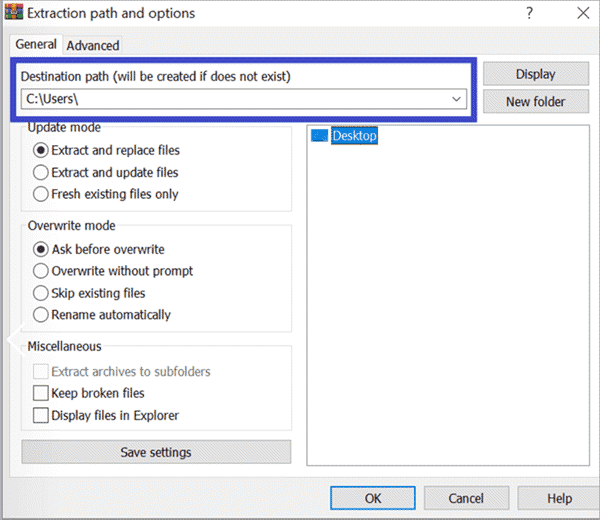 #5) The files are extracted and saved at the selected location from where they can be accessed.

WinZip is one such utility software. Do not get confused by the name. Although, WinZip is used for Zipping files it supports un-archiving of various other formats besides.Zip.

Let’s see the steps to open a RAR file using WinZip below:

Almost all of us would have sometimes or the other thought of how RAR and ZIP files differ. At the same time, most of us understand that ZIP and RAR are both archived file formats that contain one or more files in a compressed form.

Let’s get a basic understanding of the ZIP format after which it would be easier to understand the differences between the ZIP and RAR formats.

Another feature available through ZIP is to provide the user with the choice of compressing a file or not while zipping it is. Moreover, the user can also make a choice as to the type of compression algorithm to be used.

Here one needs to know that there are different algorithms for compressing a file and the difference mainly lies as to how much of compression is needed.

Let’s now take a look at the differences in ZIP and RAR file formats that will help us to decide what archive format is beneficial for us in a situation. 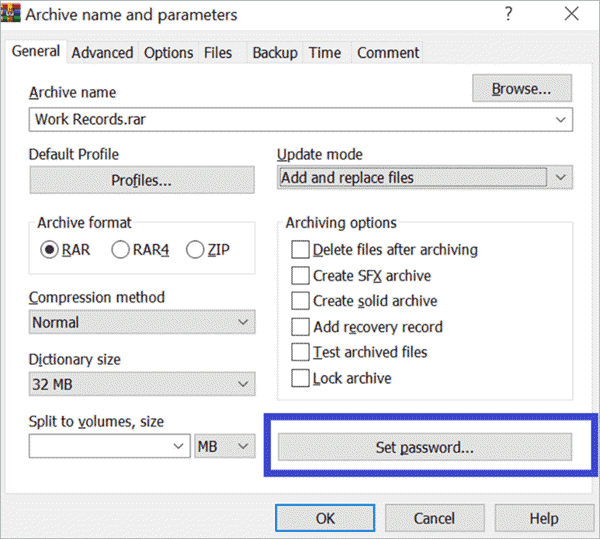 Q #2) What program allows you to open RAR files?

It has a trial period of 40 days for which it can be used before having to pay for its License. However, there is a variety of other software available that are open source and greatly preferred E.g. 7- Zip, Extract Now, etc.

Answer: Yes. WINRAR is the Windows GUI version of the RAR file format. It can thus be used for compressing and de-compressing the RAR files. But it should be remembered that WINRAR is a Licensed software and cannot be used after a trial period of 40 days without purchasing its license.

Answer: Although WINRAR is used to create and open RAR files, it supports archiving and unarchiving of zip files too.

Follow the below steps, in order to zip a file using WINRAR:

This tutorial aimed at explaining what a RAR file is and how we can create and open a RAR file/folder.

The aim was to help you to get a good understanding of various utility software available to create and open a RAR file and to be able to compare the differences so that it is easier for you to choose the best suitable software for you to work with RAR files.

We have taken a look at creating a RAR file in two main operating systems i.e. Windows and Mac.

Similarly, we also took a look at opening a RAR file on Windows and Mac operating systems. The difference between RAR and ZIP format was also discussed in-depth.

Hope this tutorial would have given you a good understanding of RAR files along with the benefits/limitations of the available utility software.