What do we mean by a great Software Testing Team?

“A team with a star player is a good team, but a team without one is a great team.” – Author unknown.

The above quote leads us to a discussion on great teams and their characteristics. This tutorial stems from the experience gained while working for different teams and observation of the behavior of team members under time pressure coupled with the complex nature of a project.

This holds well for the Software Testing team which finds a prominent place in project activities and requires the right mix of people for performing these activities. 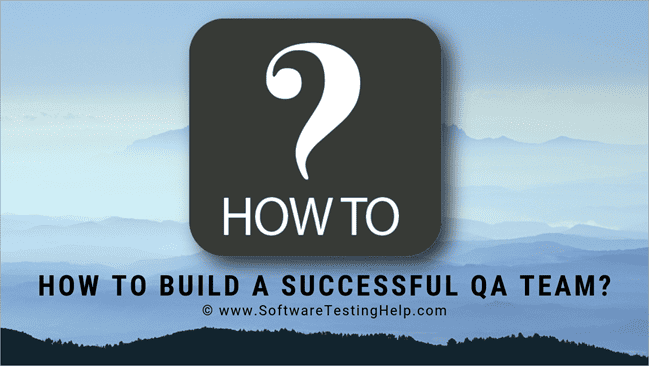 Why Do Some Software Testing Teams Fail And Others Succeed

Is there any solution to this problem? The answer is Yes and No depending on how the team members align themselves towards the common goal of the team, and not at the cost of suppressing the team members interest, thereby working together with the common understanding of the problem at hand.

The success also depends on leadership attributes possessed by the Test Lead – “Captain of the ship”.

The objective of this tutorial is to help software test engineers or anyone who believes in teamwork, to understand the characteristics of the high-performance team and educate on how to cultivate them in their teams.

The success of a team, in the long run, doesn’t depend on an individual who is considered as the “STAR” but depends on all who form clusters of stars that make a great team.

Does the new team member know the reason for which he has been selected for the team?

New members of the team are often puzzled about their presence in the team. Although you may argue that he/she need not know the purpose and just work on the task assigned to him/her. Many higher management people make this mistake.

Help individuals in understanding the project in a bigger context by clearly defining their roles and responsibilities.

This includes the relevance of his/her job, skills of individuals that could be contributed towards the projects, and shared common team goals defined earlier. This indeed brings a great commitment towards the work and hence contributes towards its quality.

When project complexity increases in terms of tasks and team size, then it would not be possible to keep track of individual tasks by a single leader. Hence the solution to this would be assigning ownership to individuals.

However, this virtual leadership often acts as an impediment rather than a solution if not considered appropriate. Mere appointment of an individual as Owner without giving serious thought to whether he/she could manage the team would not bring the desired result.

Individuals acting as owners should have a mindset that matches leaders mindset and the pride on their part to act as future leaders. These are the people who could make a difference by carrying their team members along with them. The same people by showing indifferent attitudes towards their team will disintegrate the team.

The task of the owners is not merely restricted to assigning the task to team members but to understand the task in hand i.e. a situation at a much broader perspective and bringing a common level of understanding among their team members.

Supporting the team member at times of difficulty in handling the task, word of encouragement, correcting their mistakes by not acting as the lead but as a peer, acting upon ideas or taking advice for the appropriate situation from experienced members would certainly benefit towards the shared goal.

Collaboration and a solid sense of interdependency in the team will defuse blaming behavior and stimulate opportunities for learning and improvement.

Knowledge of Seasoned Players in the Team

The term Seasoned Player indicates a person who has spent a considerable amount of time on the same project or similar kind of work. They are resources who have vast knowledge about the project. By channeling their knowledge in a proper way, the entire team could benefit.

This individual should show an act of diligence towards others’ work rather than arrogance. It is commonly said, that “Past success breeds arrogance”. They are high performers whose absence could be felt in a team but it should not be the sole criteria as there is an equal chance for the others who have a similar caliber to act at this position.

Motivation is not all about giving a speech when the members of the team are assembled but rather every effort should be made to tailor this speech to address each individual.

This means that each team member has unique qualities and a unique working style. This task is more complex than said for the Test Lead since it needs efforts on the leader’s part to sense the team member’s feelings not only towards the task assigned but also about the project as a whole.

The positive attitude of the lead will energize the team – This is quoted from experience working for one of the great test teams. If the leader complains about long working hours or insisting the team members to work with a schedule which is impossible to meet, then your team will reflect your attitude.

The team lead’s decision for this kind of task should be impartial. This does bring great respect for the awarded individual by the members of the team. They will be acting on similar grounds and ultimately the team will benefit from their collective response.

It is often noted that roles and responsibilities of the members are defined in the beginning and assessment is done at the end of the project. Agreed that this is a formal process. But informal discussions on a one-on-one basis add to this formal process.

These informal meetings should address current issues for which the members won’t feel like conveying during the group meeting, future opportunities for members, identifying future leaders/owners of the team and acting on issues at hand after feedback from the team members.

Delivering appropriate feedback on time can make the difference between a team that hides mistakes and a team that sees mistakes as opportunities. The responsibility for poor performance is usually a function of the team structure rather than individual incompetence; yet, it is the individuals who are sent to training programs to fix it.

If team members feel like they are pitted against one another to compete for rewards and recognition, then they will withhold information that might be useful to a greater team. When a team has problems, then an effective team leader will focus on the team’s structure before focusing on individuals.

“Don’t tell people how to do things, tell them what to do and let them surprise you with their results.” – George Patton

There are plenty of things to be considered while building a successful team. Key terms like Unity, Trust, Respect for others opinion and acting without fear are the ingredients for a great test team and in general for any successful team.

What do you think from your experience? What are your characteristics for building a successful QA team?

Great Software Testing articles are on their way to your inbox! Just click here to get the articles via email.

60 thoughts on “How To Build a Successful QA Team”