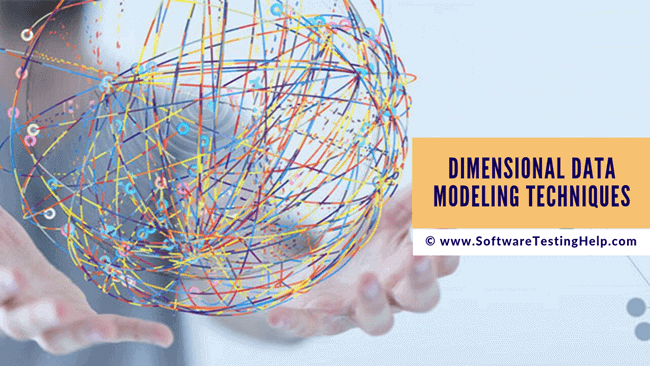 Steps to be followed while designing a Dimensional Data Model: 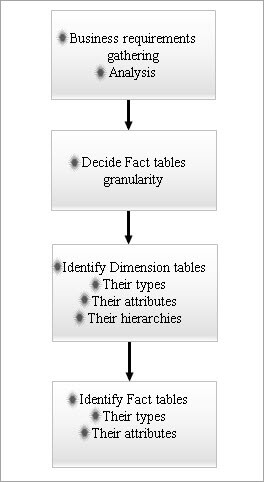 Enlisted below are the various benefits of Dimensional Data Modeling.

Given below are some of the existing dimensional data modeling myths.

Also Read >> What Is Data Modeling In Detail

Dimension tables play a key role in the DW system by storing all the analyzed metric values. These values are stored under easily selectable dimensional attributes (columns) in the table. The quality of a DW system mostly depends on the depth of dimension attributes.

Hence we should try to provide many attributes along with their respective values in the dimension tables.

#1) Dimension Table Key: Every Dimension table will have any one of its dimension attributes as a primary key to uniquely identify each row. Hence the distinct numeric values of that attribute can act as primary keys.

If the attribute values are not unique in any case, then you can consider sequentially generated system numbers as the primary keys. These are also called as Surrogate keys.

If it is failed, then the respective fact table data cannot be retrieved for that dimension key.

In real-time scenarios, you can see dimension tables with 50 (or) more attributes.

#4) Attributes May Not Be Directly Related: All the attributes in a dimension table may not be related to one another.

#5) Not Normalized: Normalizing a dimension table brings more intermediary tables into the picture which is not efficient. Thus dimension tables are not normalized.

Dimensional attributes can act as the source for constraints in queries and can also be displayed as labels in the reports. The queries will perform efficiently if you directly pick an attribute from the dimension table and refer directly to the respective fact table without touching any other intermediary tables.

#6) Drilling Down and Rolling Up: Dimension attributes have the capability to drill down (or) roll up the data whenever needed.

Here is an example of a Customer Dimension Table: 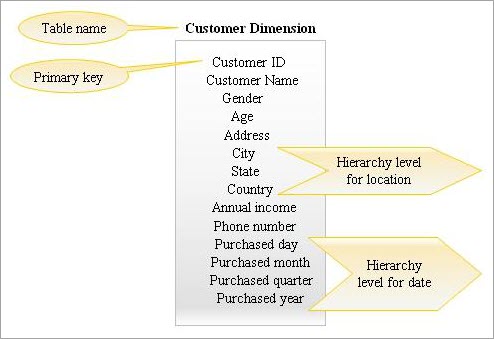 By understanding the above concepts, you can decide if a data field can act as a dimension attribute (or) not while extracting the data from the source itself.

The Basic Load Plan For A Dimension

Below are the steps involved in this process:

The various types of Dimensions are listed below for your reference.

A conformed dimension is a dimension that can be referred in the same way with every fact table it is related.

Date dimension is the best example of a conformed dimension as the attributes of date dimension such as year, month, week, days etc. communicate the same data in the same way across any number of facts.

An example of a Conformed Dimension. 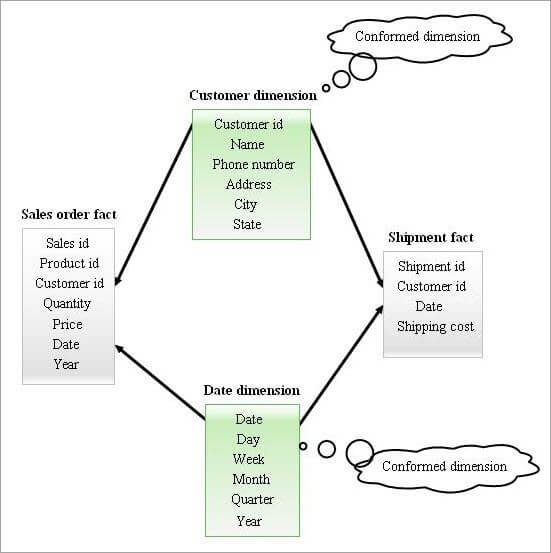 Creating a new dimension for every individual flag attribute makes it complex by creating more number of foreign keys to the fact table. At the same time, keeping all these flags and indicator information in fact tables also increases the amount of data stored in facts which thereby degrades the performance.

Hence the best solution for this is creating a single junk dimension as a junk dimension is capable of holding any number of “yes/no” or “true/false” indicators. However, junk dimensions store descriptive values for these indicators (yes/no (or) true/false) such as active & pending, etc.

Based on the complexity of a fact table and it’s indicators, a fact table can have one or more junk dimensions.

An example of Junk Dimension. 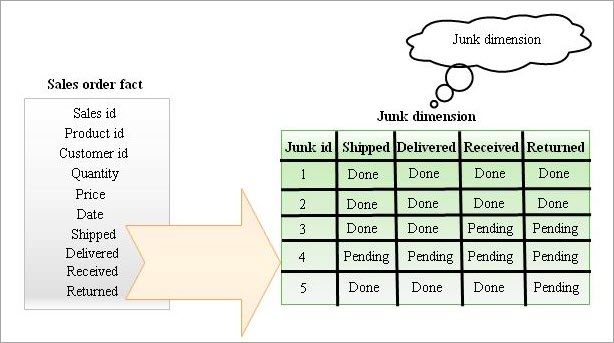 A single dimension that can be referred for multiple purposes in a fact table is known as Role-playing dimension.

The best example for a role-playing dimension is again a Date dimension table as the same date attribute in a dimension can be used for different purposes in a fact such as date of order, date of delivery, date of transaction, date of cancellation, etc.

An example of a Role-Playing Dimension. 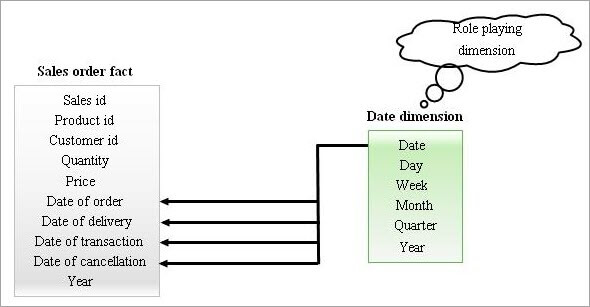 There may be few attributes that can be neither dimensions (metrics) nor facts (measures) but they need for analysis. All such attributes can be moved into degenerate dimensions.

For example, you can consider the order number, invoice number etc as degenerate dimension attributes.

An example of a Degenerate Dimension.

A slowly changing dimension is a kind where data can change slowly at any time rather than in periodic regular intervals. Modified data in dimension tables can be handled in different ways as explained below.

You can select the SCD type to respond to a change individually for every attribute in a dimensional table. 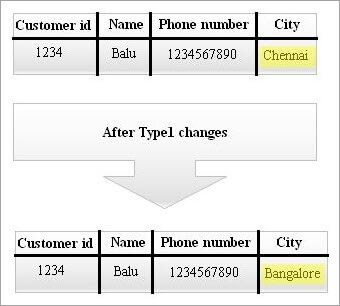 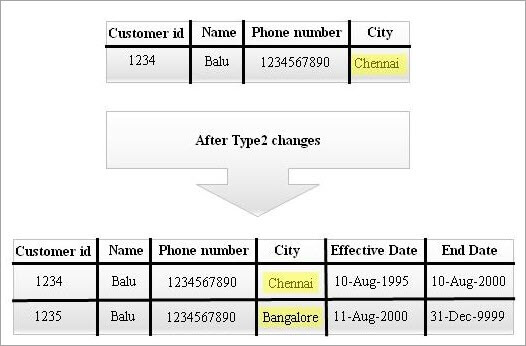 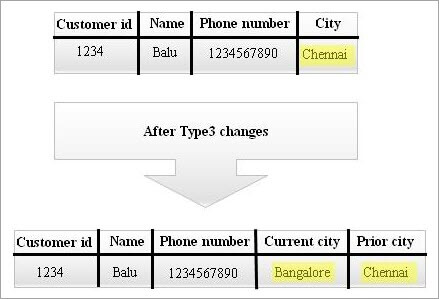 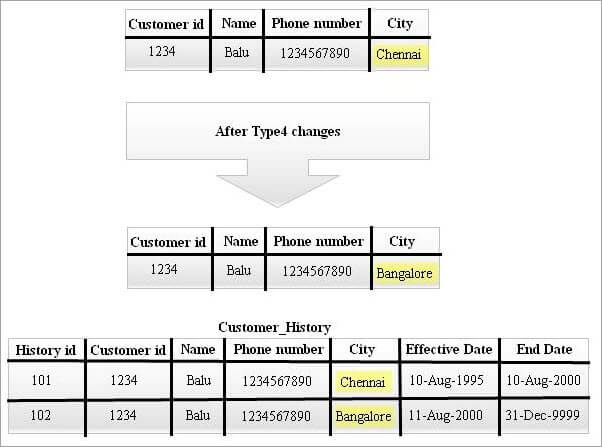 Fact tables store a set of quantitatively measured values that are used for calculations. The fact table’s values get displayed in the business reports. In contrast to the dimension tables textual data type, fact tables data type is significantly Numeric.

If the composite key is missing in a fact table and if any two records have the same data, it is very tough to differentiate between the data and to refer the data in dimension tables.

Hence, if a proper unique key exists as the composite key, then it is good to generate a sequence number for each fact table record. Another alternative is to form a concatenated primary key. This will be generated by concatenating all the referred primary keys of dimension tables row-wise.

In a dimensional model, the fact tables maintain many-to-many relation with dimension tables.

An example of a Sales Fact Table: 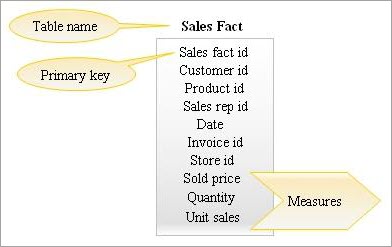 You can load a fact table data efficiently by considering the following pointers:

Do the partitioning physically on a fact table into mini tables for better query performance on bulk fact table’s data. Except for the DBAs and the ETL team no one will be aware of the partitions on facts.

As an example, you can partition a table month-wise, quarter wise, year-wise, etc. While querying, only the partitioned data is considered instead of scanning the entire table.

We have now got an idea about partitions on fact tables. Partitions on facts are also beneficial while loading huge data into facts. To do this, first, break the data logically into different data files and run the ETL jobs to load all these logical portions of data in parallel.

Unlike other RDBMS systems, ETL system does not need to maintain rollback logs explicitly for mid-transaction failures. Here “bulk loads” happen into facts instead of “SQL inserts” to load huge data. If in case a single load fails, then the entire data can be easily reloaded (or) it can get continued from where it is left off with the bulk load.

Deleting a fact table record happens only if the business wants explicitly. If there is any fact table data that no longer exists in the source systems then that respective data can be deleted either physically (or) logically.

#7) Sequence For Updates And Deletes In A Fact Table

We should follow the above sequence in both cases because dimension tables and fact tables maintain referential integrity all the time.

As the name indicates transaction fact tables store transaction-level data for each event that happens. Such kind of data is easy to analyze at the fact table level itself. But for further analysis, you can also refer to the associated dimensions.

For example, every sale (or) purchase happening from a marketing website should be loaded into a transaction fact table.

An example of a Transaction Fact Table is shown below.

As the name indicates data in periodic snapshot fact table is stored in the form of snapshots (pictures) at periodic intervals such as for every day, week, month, quarter etc depending on the business needs.

So it is clear that this is an aggregation of data all the time. Hence snapshot facts are more complex compared to transaction fact tables. For example, any performance revenue reports data can be stored in snapshot fact tables for easy reference.

An example of a Periodic Snapshot Fact Table is shown below. 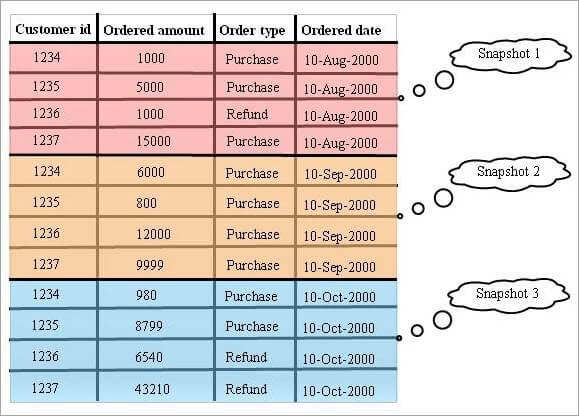 Accumulating snapshot fact tables allow you to store data into tables for the entire lifetime of a product. This acts as a combination of the above two types where data can be inserted by any event at any time as a snapshot.

In this type, additional date columns and data for each row gets updated with every milestone of that product.

An example of an Accumulating Snapshot Fact Table.

In addition to the above three types, here are a few other types of fact tables:

#4) Factless Fact Tables: A fact is a collection of measures whereas fact less captures only events (or) conditions that do not contain any measures. A fact-less fact table is mainly used to track a system. The data in these tables can be analyzed and used for reporting.

For example, you can look for details of an employee who has taken leave and the type of leave in a year, etc. Including all these non-clear fact details in a fact, the table will definitely increase the size of facts.

An example of a Factless Fact Table is shown below. 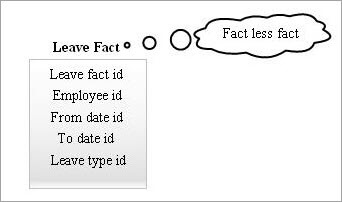 #5) Conformed Fact Tables: A conformed fact is a fact which can be referred in the same way with every data mart it is related to.

Specifications Of A Fact Table

Given below are the specifications of a Fact Table.

You can get an idea of how dimension tables and fact tables can be designed for a system by looking at the below dimensional data modeling diagram for sales and orders. 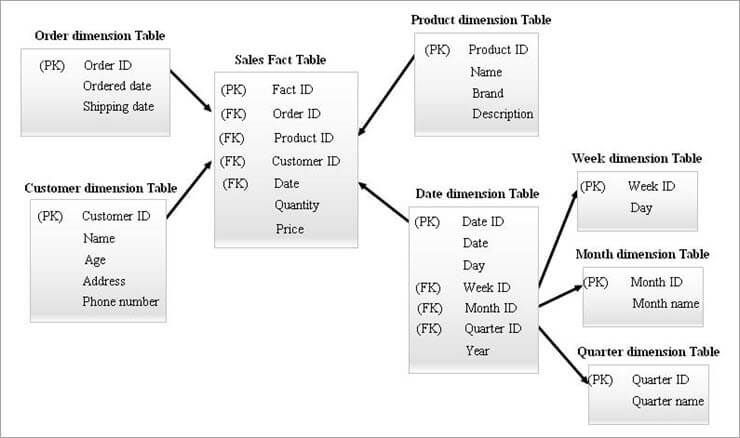 By now, you should have gained excellent knowledge about Dimensional Data Modeling Techniques, their Benefits, Myths, Dimension Tables, Fact Tables, along with their Types and processes.

Check out our upcoming tutorial to know more about Data Warehouse Schemas!!