As the title of itself suggests, in this tutorial we will discuss more on the Android testing process.

But, before getting into the various details of the Android testing process, I would like to put forward a couple of questions.

Do you own a mobile phone?

Now, how dumb is that question! Of ‘course all of us do. Everyone has a mobile phone. Mobile phones have become a basic necessity of human existence nowadays.

Can you tell me the OS that’s there on your phone?

If you purchased your phone in between 2014-16, then the chances of your phone running on Android are around 80-85%. 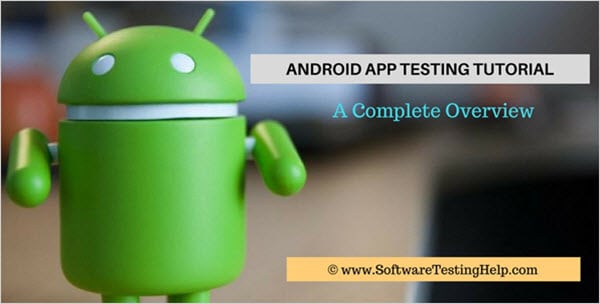 The below stats describe more about the growth of Android in an easily understandable manner. 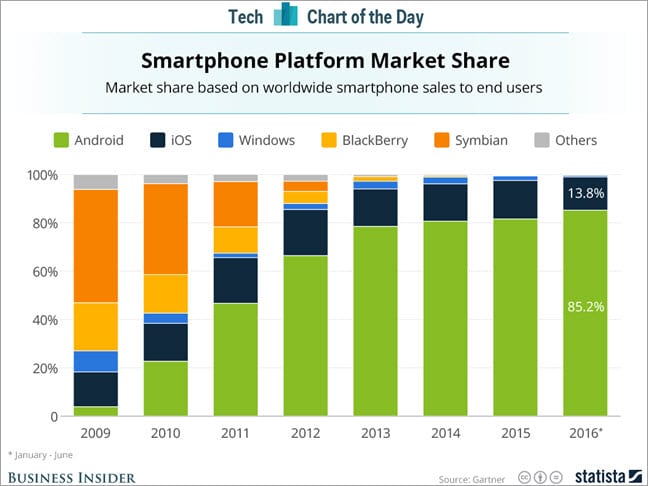 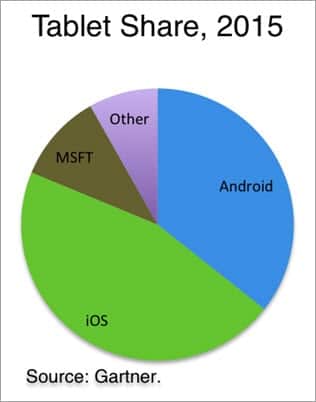 Why did I just take you through all those numbers?

It was just to make you aware of how vast Android has grown, how tricky the app development has become and how much market this OS has captured in the past decade.

Every website, windows app and Mac App has an android sibling now. Everyone goes for developing an app for Android as soon as they plan to develop a website/windows app. It has now become necessary, as the customers have also started preferring mobile apps over computer apps or websites in the recent years.

Some of the apps that are very frequently used in our day to day activities are Flipkart, Amazon, Zomato, DeliveryHero, Citi Bank, TrueCaller, Facebook, Gmail, Whatsapp etc.

The reason for the surge in the Android market is that:

Along with the development requirement of the Android Apps, there has also been a rise in the requirement for testers who are knowledgeable in android testing.

As a tester, before you start testing any android built application, you need to do a lot of homework. The first thing to do is to study the OS and its history. If you don’t know the OS you can’t test the app against the various versions. The basic functionality of the OS version, the UI, GPS, network type support, battery life etc., are some of the important facets that affect an app.

With Android, it is not just the OS but the plethora of devices that also need a study.

A vast number of devices are available in the market, hence before finalizing and freezing your test bed, you need to find out the target audience device share. The various devices offering different features like DualSIM, dual camera, screen resolution, themes etc, affect an app and they need to be tested.

Hence it is very important for a QA to gather a comprehensive knowledge about the complete Android ecosystem.

There are various testing methods that are followed by successfully certifying an Android app.

A typical Android app architecture would look similar to the diagram shown below: 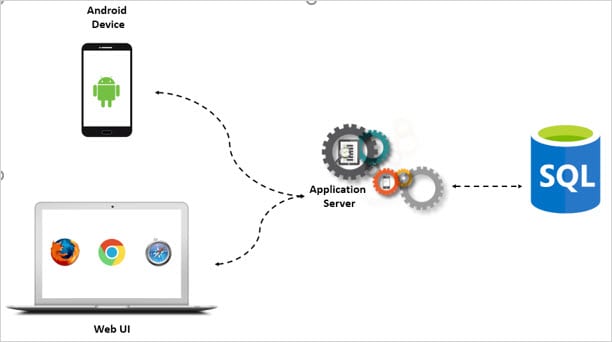 Based on the above figure, there are 2 possibilities for an app:

1) Mobile App for the web application: It may be possible that the customer has a web app and wants to make a mobile app for the same. Amazon, Jabong, Myntra etc., did the same thing, and the moment mobile apps started creating a boom in the market these commercial companies realized that soon people will move from web apps to mobile apps.

2) Mobile App as a separate business entity: I tested a similar logistics app, in order to increase the business it created a separate app for its drivers to facilitate a smooth delivery and removed the paperwork.

The drivers had the app installed on their phones to move the shipment to different stages of delivery and their corresponding status, and delivery updates were reflected in their existing web app.

Other such Examples where mobile app is a separate entity are WhatsApp, health tracking apps like S Health etc.

‘To Do’ list before the start of Testing Process

Unlike a normal testing cycle, for the very first release of a mobile app, there are a few items which need some extra research and planning for a successful delivery of the app.

Following are some of the activities that are important for a QA to carry out before the actual testing starts:

#1) Research on OS and Devices:

Apart from understanding the app requirement, you also need to understand the impact of the various OS versions and the device models. You need to create test cases or scenarios w.r.t the OS and device models.

Unlike desktop, web and iOS apps, the test bed creation for android apps is very tricky because of the open Android system. The decision should be taken after discussion with the BA, developers and the product owners to find the target audience.

As it is the first release, an approved plan with approved test bed, testing types etc., should be in place. If there is a separate time required for researching functionalities or business rules or if the testing is going to be tricky etc., everything should be covered in the plan.

Unlike the conventional tests that we normally do, there are few tests that are very specific to mobile apps. Namely field test, GPS test, image capture test, etc. These need to be documented in the test cases along with how these type will be tested.

Following types of testing are performed in order to certify an Android application:

Testing is normally achieved by user interface initiated test flows. Not just the flow of a use case is tested, but the various business rules are also tested. Testing is done by certifying the requirements. i.e. whether the application is working based on the requirements.

Let us take the Example of Zomato app.

When you launch the app, based on the location, the list of restaurants shows up. Now as a QA, you have to test the listing of restaurants. 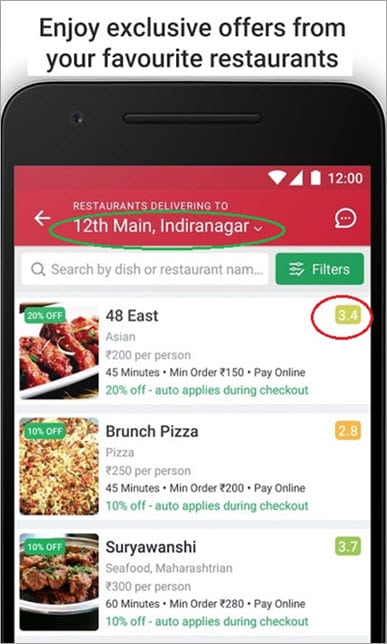 This is an user-centric testing of the application. In this test phase, items such as visibility of text in various screens of the app, interactive messages, alignment of data, the look and feel of the app for different screens, size of fields etc are tested under this.

For the same above Example of Zomato, the UI tests would be:

This testing is done mostly in the form of two matrices of OS Vs app and Device model Vs app. Usually, a list of supported OS (and sometimes devices) is provided by the product owner or customer.

The need for this testing is:

In other words, it is also termed as Integration testing. This testing is done after all the modules of the app are completely developed, tested individually and all the bugs are fixed verified.

Interface testing includes tests like a complete end to end testing of the app, interaction with other apps like Maps, social apps etc, usage of Microphone to enter text, usage of Camera to scan a barcode or to take a picture etc.

Again considering Zomato, the integration tests would be like:

The key features of Network Testing include:

Performance of the application under some peculiar conditions are checked.

Performance is basically tested from 2 ends, application end, and the application server end

There are two types of apps on an Android device i.e, Pre-installed applications and the applications which are installed later by the user.

For both of the above, installation testing needs to be carried out. This is to ensure smooth installation of the application without ending up in errors, partial installation etc.

Privacy and security are the 2 major requirements of an app. However, in Banking, healthcare, this becomes the primary requirement.

Field testing is done specifically for the mobile data network and not in-house but by going out and using the app as a normal user. This testing is done ‘only’ after the whole app is developed, tested and regressed (for bugs and test cases).

It is basically done to verify the behavior of the app when the phone has a 2G or 3G connection. Field testing verifies if the app is crashing under slow network connection or if it is taking too long to load the information.

This type of testing is also known as Offline Scenario Verification. Conditions where the communication breaks in the middle are called as offline conditions.

Some of the conditions where interruptions of a network can be tested are as follows:

There are certain factors to be considered while putting a strategy for mobile app testing.

2) Beta Testing of the Application:

There are a handful of Android testing frameworks that are available.

In this tutorial, we are going to discuss 3 different types of most commonly used frameworks:

Android application automation can be clubbed with manual as per the need. However, if Androind Automation testing is added to the strategy, selecting the correct tool is a big task. While selecting the automation tool factors like Multi-platform support, Test workflow, Price of the tool, service/support etc. should be taken into account.

There are several challenges involved in Android application testing. There are different factors to be taken into account before the Android testing process can really be implemented but once done this becomes a very interesting task.

Watch out our upcoming tutorial to know more about Mobile Testing Challenges and Solutions.