SoapUI is a great tool for functional testing, web services testing, security testing and load testing. In this tutorial, we are going to discuss the important features of SoapUI and SoapUI Pro.

This is the 2nd tutorial in our SoapUI web service testing tutorial series.

For more advanced and enterprise users SmartBear also released the latest SoapUI NG Pro version which includes all the features of SoapUI and SoapUI Pro along with some really cool new features. SoapUI NG pro is embedded in SmartBear “Ready! API Platform”.

For all our tutorials the focus will be on core features of the original SoapUI and Pro version.

Even without prior familiarity, SoapUI is very comfortable for new users to work with. For example, if we wish to create a SoapUI project, just click on the File menu and then click New SOAP Project option and then provide valid WSDL file path. That’s it. Similarly, if you take any assignment in SoapUI tool, we can do it as easily as Microsoft suites.

A project can be used several times for smoke testing and functional testing. If we need any test suites for other projects, SoapUI offers the feature called cloning which enables us to duplicate existing test suites and put them into other projects.

SoapUI also provides options for test debugging that lets us watch the test execution step by step. With the help of SoapUI, we can also perform data driven testing within a short period of time. All of these are going to be addressed in greater detail later.

SoapUI and SoapUI Pro tools provide options to protect the websites from hackers and viral software applications. Vulnerability testing is a type of testing that helps us to identify the weak areas of web applications.

Similarly, SQL Injection feature allows us to provide some standard SQL queries and methods to identify the weak areas of the application and database side.

For example, see the below SQL query:

The above query will return all the customers since the 1=1 condition is always true. This way hacker can get all the username and passwords easily with this sample query. SoapUI tool can simulate these queries so we can understand the hack-proof-ness of the site.

XML bomb is in SoapUI that allows us to test services by passing huge XML data and examines the overflow of the application.

In addition to these, SoapUI tool has many more features like cross-site scripting, passing random string data to identify the string vulnerabilities, boundary level testing, etc.

SoapUI can also estimate a web application’s load balancing capacity. To do so, SoapUI includes an option called LoadUI that is available on the toolbar. After creating a project with proper test suites we can move to load testing by just clicking on the LoadUI option. SoapUI then navigates to the LoadUI tool (it should have pre-installed on your computer for this to work) and then to the tests can be configured based on the need.

After executing the load test, LoadUI will generate a report that helps determine whether the application can run with a heavy load or not.

As discussed before, we can use SOAP and REST based services to validate in SOAPUI. SoapUI user interface is designed as a simple and comfortable interface for all the users.

To write automation scripts in SoapUI, we need to add Groovy Test step under the test suite. The groovy script has built-in libraries and allows us to integrate java based libraries too. So, it will be very helpful if you are familiar with Core Java. We can write complex scenarios using Groovy script and java.

For example, consider a situation where you need a response from one test request and then pass it as an input to another request. To accomplish this, we could store the response data in global properties and then reuse them through the scripts. 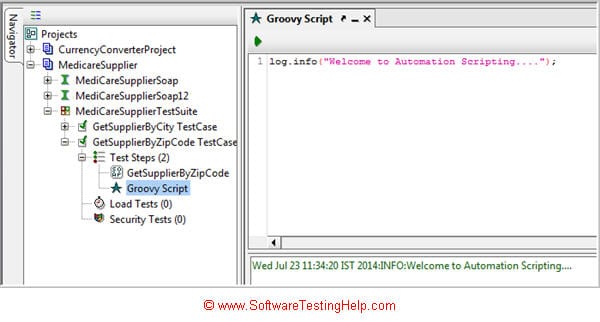 In the above responses, we have “Message” and “Status” elements. So, it is easy to validate these responses using either “Message” or “Status” value. For that, we need to configure in the respective assertions appropriately as XPath Match assertion, XQuery, Contains and Not Contains etc.

SoapUI recently released the latest version of SoapUI Pro. It is basically developed on core SoapUI so you can continue using SoapUI existing projects with this version as well.

2. SoapUI NG Pro is introduced in “Ready! API platform” which determines the actual functionality of the API service and its expected behaviour.

3. Ready! API platform provides the skeleton that determines our service inputs to generate the test coverage report which evaluates the functionality coverage implicitly.

4. It allows ad-hoc testing or command line interface to test our APIs effectively.

5. All the REST, SOAP API and other service components can be used by simply drag and drop method

7. We can transfer the property test step values to XPath-queries, scripts and so forth.

9. SoapUI NG Pro allows the end user to customize their services easily even they are new to SoapUI Pro or development experience.

Keep reading and don’t forget to post your queries in comments below.