We had a look at the 8 Brilliant Tips To Handle a Difficult Coworker in Workplace in our previous tutorial.

This Tutorial Describes Real-Life Scenarios with a Dissatisfied Customer or an Incompetent Supplier and Teaches You Strategies to Deal with Them Successfully:

All the customers may not get satisfied alike for any given product or service.

Each one will have different views and expectations on the product and obviously, there will be customer complaints and confusion. Let us check some of those difficult situations and how to manage them effectively. 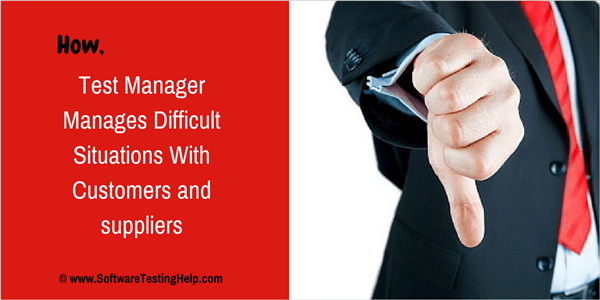 Strategies For Dealing With Suppliers And Customers

You have an annoyed client because you messed up.

The first step in dealing with an annoyed client is to listen while they get their anger out of their system. Sympathize them with phrases such as, ‘How annoying is it for you,’ or ‘I can see how infuriating that must be’.

Once they express their feelings and realize that you are listening and sympathetic, they will calm down.

At this point it will be prudent as well as honest to hold your hands up and admit your fault by saying something like, I’m terribly sorry, I should have put the order manually and I forgot. And I do apologize, especially after it’s caused so much trouble to you.

This will take the wind out of their sails, it is not least because very few people admit to their faults.

So as long as you offer to put things right in any reasonable way that suits the customer, they are likely to end up feeling very satisfied. Not only you have fixed the problem but also you have been honest with them. It will reassure them that your organization is the decent one to do business with.

Everyone makes an occasional fault, and at least you admit to it. Put it right generously.

Some people will advise you, never to admit blame when dealing with customers, in case they sue you. It will be wise to take legal advice if your mistake costs them in thousands, but in most cases, they’re not going to sue.

If you’ve cost them just a few pounds then what’s the problem? You ought to pay up, so there will not be a question of suing. From a legal point of view, refusing to admit blame may sometimes be wise. But from an ethical and client relations standpoint, it is always better to admit your faults.

You have an angry customer because one of your team members messed up.

Handle this exactly as you would, if it was you who had messed up. You are responsible for your team and you should carry it. The client doesn’t need to know which individual in your team has messed up. It’s enough to know that it’s your team.

Don’t ever try to pass the buck while speaking to a client, tempting though it may seem to say, ‘I’m afraid that a junior member of my division made a mistake’.

You will clearly need to talk to the team member in private. However, you need to separate the mistake from the client’s reaction to it. If the client is overreacting wildly to a minor error of judgment then don’t make a big deal of it with your team member just because the customer has made it.

If you’re angry and upset by your exchange with the client, wait until you will be calmed down. And then tackle the person who made the mistake.

You can’t deliver on a promise made to a client.

The most important thing is to limit the harm and there are two key ways to do this:

#1) The most important thing is to inform your customer as early as possible. The later you tell them, the deeper the hole you land them in. Warning in advance will give them time to find a contingency, without that it could be a major problem.

If you’re not sure about whether you can deliver or not but most probably not until then you’ll need to explain the situation to the client. Otherwise, you’ll let them down. Then they will decide whether to take the risk or find an alternative.

#2) Apologize plentifully and let them know that you recognize how inconvenient it is for them. Then offer them whatever you can do to make up for it.

This might mean telling them you can deliver a part of what they want or they can have everything they want but later than they hoped or to a lower standard. Or you can say ‘I can’t do this, but I can find you someone who can’.

A major customer threatens to go elsewhere unless you make concessions and you can’t afford it.

They say that they’ll go to your director/the top of your organization/the press. The answer is in the question itself. If you really can’t afford the concessions, then you can’t afford that client. Let them go.

Before you do this, make sure that there aren’t any other concessions that would suit you both. If you can’t drop your prices low enough then try for the options of paying in installments or any other very good term. If you can’t deliver soon enough, perhaps you could deliver a part of the order.

If there is no meeting ground, then make sure you part on welcoming terms. Don’t tell them they’ll regret changing suppliers. That way, they may come back to you. If they were bluffing to get you to make concessions or if their new dealer lets them down then you need to make them feel that they can come back to you easily.

A dissatisfied client threatens to report you to the management.

Presumably, you’ve done nothing wrong, so you have nothing to worry about. Disagreeing with them will make it worse, and look as if you’re scared. After all, they were threatening you to get a response from you. The tactic clearly hasn’t worked so they may abandon it.

If the customer threatens you that they will go to your immediate manager or the director and then inform the manager first. They won’t be too pleased in looking a fool if they get a call from a client and they don’t know what is happening. So, brief them fully.

If by any chance you are at a fault then also it is better to confess. It will be better than your manager had heard it from you first than from an angrycustomer.

A customer is incorrect.

Sometimes a customer blames you for doing something that you really haven’t done. In fact, maybe their problems have arisen because they failed to give you their full address, or sign the cheque. So, what do you do when they criticize you? Is the customer really, always right?

However, if you really want to do something, describe it as a gesture of appreciation for bringing their problem to your attention.

You know one of your customers is lying to you.

You get them infrequently: Customers who frequently claim that the goods arrived faultily or damaged when you know for a fact that they didn’t. Whatever you do, don’t bother arguing. You’ve got two options:

#1) Give the customer the benefit of the doubt.

#2) Stop providing them and ask them to go elsewhere.

You’ve already got a lying client. If you argue with them, you’ll have an angry, lying client – and that’s worse. They may spread rumors or damaging gossip about your organization. So don’t fall out with them.

The other trap to avoid is changing your systems to try and combat their dishonesty. You could inconvenience all your honest clients, and make your own lives more complicated, just for the sake of a client who doesn’t deserve that kind of effort. So, if you don’t want to put up with it, just drop the customer.

A significant customer demands more of your time than you can spare.

If you have a very talkative client who engages you in long-winded conversations then you need to find a way to get the information, you need from them and terminate the conversation without upsetting them. You can’t keep interrupting them without sounding impolite, so you need to interrupt yourself.

It may sound strange, but it makes sense really. You need to get a word in, but to do it by joining their conversation rather than deflecting it. Once you’re in then you can change the subject like this: ‘I quite agree, the traffic’s getting silly on the North Delhi these days. By the way, when do you need these delivered by?’

There’s another kind of demanding client too: The one who’s on the phone 15 times a day with endless minor inquiries. You can’t avoid this customer altogether and you’ll offend them if you try to. You just need to get them to be less of a nuisance.

A decent and previously consistent supplier lets you down badly.

In the short term, you need to find another supplier. The question is whether to change the supplier or give him another chance? In the end, it’s your decision, but here are some considerations to consider:

By the time, you’ve thought through all these questions, you should be able to decide whether to stick with this supplier or not.

And there’s one other thing that you can do – monitor the service and quality you get from the supplier you were going to use as a replacement (assuming you find another supplier for this order). This should give you an idea of whether it’s worth moving your contract.

You have a PR catastrophe.

Everybody loves a drama – except the people caught up in it. Inevitably, many crises will attract the attention of the press. They gather like hyenas around the kill, each hungry want to get the first bite of the story.

Not only you have to deal with the crisis itself but also you have to cope with the press. Press will be ready at any moment to turn on you if you have made an incorrect move.

The press can either be a blessing or a curse in a crisis. And the balance can lie in, how you handle them. Of course, sometimes the press is on your side from the start. If your buildings have been damaged by severe weather, or a lorry has careered off the road straight through your shop window then you will have the sympathy of the media from the outset.

But the press always wants someone to blame, and all too often they will pick on you.

There are ways to handle the press (and other media) to minimize the damage. And at best, turn their attitude around, to one of support for your case. So below are the key rules for handling a PR crisis.

Tell the press what’s going on right from the start. Keep them sweet by holding press conferences, don’t wait to be asked. Get outside the front gates and tell them what is happening. The more information you give them, the less they will need to dig the dirt to get a decent story.

There are three rules to remember, to keep things simple.

The first one is the press doesn’t know your organization or your industry as you do, and they want to print a clear, simple story for their readers. So don’t confuse them with unnecessary details, jargon or background information. Just keep your message uncluttered.

And the third rule is: never speculate. This will simply add to the confusion.