We discussed How To Manage Difficult Situations With Team Members in our previous tutorial.

Read This Interesting Article To Know How to Deal With Difficult People at Work. This Question is More Important When You have to Deal With a Difficult Boss:

Similar to conflict among team members, there can be a difficult boss or supervisor you need to deal with.

This article explains how to handle some of the difficult situations with the manager or supervisor in detail. 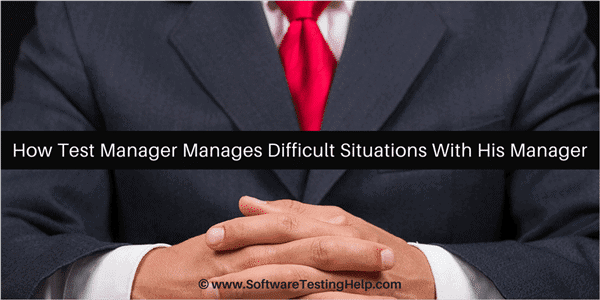 Real-Life Scenarios To Deal With A Difficult Boss

You think your manager is incompetent.

Superiors who are incompetent can make your life difficult, especially when he/she imitates you. This will affect the performance of the whole department and the department can miss out on bonuses and salary hikes. The challenge is to make sure that others will realize that you don’t deserve to be tarred with the same brush as your manager.

#1) Write it down in detail about your contribution to the organization. Instead of discussing ideas to the manager verbally, write them down as suggestions. This can only be a page long. But it will be there in black and white. Send these ideas to another concerned person along with your manager.

You can tell your manager ‘I’ve mailed this communication to someone else also because I thought their input would be useful in helping us to schedule’ or ‘I thought John could use this idea in his department too’.

#2) Now do the same with any other warnings you want to make. If you are concerned about the project then email your superior or send them a memo, outlining your concerns and your commendations for remedying the problem.

If things go wrong then it will be clear that it wasn’t your fault. In fact, if the manager had listened to you then they could be better. And if the manager has followed your advice, then success is in your hands

#3) Write down all your achievements and circulate it. You don’t have to send a memo saying, ‘Am I not brilliant? Look what I did!’ You can email your boss with essential details of a new contract, you’ve just landed and copied it to the other relevant departments as well. Just make sure it’s clear that you came up with an idea or put in the hard work.

Either way, if you’re dejected then you need to think hard about ‘what is the point in staying in the job’. Unless one of you looks likely to get transferred soon or your manager is already looking for another job, leaving is the best option.

If it was not that bad then you might not want to leave and will adjust to the situation. Don’t keep bitching about your manager because eventually he/she will find it out and things will become more unfriendly than they were before.

Your finest bet is to:

The manager is picking on you personally.

Maybe your manager is great for others, but not for you. Being singled out is deeply distressing. It is arguably worse than receiving the same treatment from a manager who dishes it out to everybody.

The first step is to talk to your colleagues if you can. See if they have also noticed the same and enlist their support. If colleagues are not supportive then it may act as a deterrent.

The first step is to talk to your manager. Be confident and non-confrontational, and try to find out why they’re selecting you. Don’t put it in these terms. Instead of that tell them, you are feeling that he/she is dissatisfied with something you’re doing, or failing to do. Ask them what you can do to resolve things.

If there’s a specific reason then the manager will probably tell you in response to this. And you can take steps to change things. If the reason is jealousy or something else then you won’t get a clear response. But highlighting the problem may well convince them to lay off.

Your Manager is biased against you.

When people judge you wrongly for something on which you have no control over, it is extremely annoying. When it’s done by your manager, it can also damage your job. Whether they are sexist, racist, ageist, classist or anything else that you need to challenge the problem.

Meeting with your manager for a calm discussion about the problem can be very helpful. Forcing your manager to acknowledge that your performance will not be affected by your age, gender, race or any other similar factor. There are some other steps as well which you can take to help yourself.

Example: If you’re a woman with a sexist manager, then don’t ask him to change the light bulb for you.

It is nothing to do with your skills for the job but it will give him a chance to say that women are pathetic.

You don’t want to support your manager for examples used in the meeting. When you ask for examples of, how your work is harmfully affected by being a woman/being over 55/being public school educated/being black/being gay or whatever your manager’s preconception is, you want them to be unable to cite an example.

Your manager expects you to be a workaholic.

When you have family promises, you simply can’t keep working late. If your manager wants you to work for 16 hours a day then it’s not your problem. But if you’re expected to join in it, then it can be a big problem. And also your colleagues are ready to work for extra hours, then you will feel isolated if you complain.

If it’s not too late already then don’t start working for long hours. It’s a lot easier to say no initially, better than to get fed up later. And try to cut your workload down by several hours a week. There are some other steps to consider as well.

Your manager seems to think that you’re permanently available on call.

If your manager is calling you during non-working hours or on holiday:

Your manager is having a hard time and is taking it out on you.

This is intolerable, no matter how much pressure your manager is facing. This will be more intolerable if it isn’t their usual behavior. Any manager can have a bad day. But you should be able to ignore it.

When your manager is giving you a hard time, respond coolly but assertively. Don’t snap back or retaliate in kind, but make it clear that you’re not prepared for such behavior.

The simplest way to do this is to simply say, ‘Please don’t shout at me’. A manager who is treating you like this because of stress will most probably be shocked to realize how impolite he/she is being.

If the problem persists, talk to your manager in private. Let him know how you feel when he takes his emotions out on you. Be reasonable and constructive. Don’t make allegations.

Approach the issue from your own perspective. And express the fact that you are upset and concerned about his/her behavior. Once the boss realizes how serious the problem is becoming, he/she will act accordingly.

Your manager’s stress, whether it is because of home or work, is none of your business. He may not want to talk about it, and may not want to admit that it is the cause of his/her changed behavior. This will suggest that the manager can’t manage the stress (it may be true, but that’s the point). So don’t bring in the subject.

After all, the cause of their behavior isn’t the issue, it’s the behavior itself that you need to address. So it’s not actually relevant.

Your manager had a hard time and bursts into tears in front of you.

Suppose your manager has just been bawled out by the MD or he/she is going through a divorce procedure then what will you do if he/she bursts into tears in front of you?

Here are a few guidelines:

Your manager takes credit for your thoughts.

This is not only annoying but also damaging your career. If your ideas aren’t recognized as your own then how are you going to be rewarded for it? You need to act, to make sure that you will get the credit you deserve.

Your manager blames you for his/her fault.

None of us like to be blamed for someone else’s mistake. It will be annoying. For a start, if your manager makes it a habit, put your achievements down in writing, as you would for a manager who takes credit for your ideas.

That way you’ll have the details when you need them – appraisals, promotion interviews and so on. If your manager tries to blame you in private then draw his/her attention to the relevant paperwork.

You think your manager has made a major mistake.

What you do here will depend on the nature of the mistake. If drawing attention to the fault won’t help then there’s no point in doing it. This is applicable when it is too late to save it.

If it isn’t too late to correct the mistake then you should try, even though you think it will not work. It’s important to understand the problem and try to find a remedy for it. Hence persuade your manager.

If your manager really doesn’t want to notice then you should be able to develop a contingency for the mistake.

For Example, your boss has switched to a new supplier and according to you, he is untrustworthy. You reckon when that next order goes through the supplier and when he can let you down. You should get quotes and timescales from the other suppliers, so that, if your manager’s supplier will be unable to fulfill the order on time, you will have the other suppliers ready.

Dealing with difficult people at work can be very tricky. In this article, we have provided some practical tips to deal with a difficult boss.