A Colleague Upsets You in a Meeting, Another Frequently Turns Meetings into a Battleground. Learn to Deal with Difficult Coworkers Using These Practical Tips:

We discussed How To Deal With A Difficult Boss in our previous tutorial.

In this tutorial, we will discuss some difficult situations that a Test Manager may have to face while dealing with his colleagues. 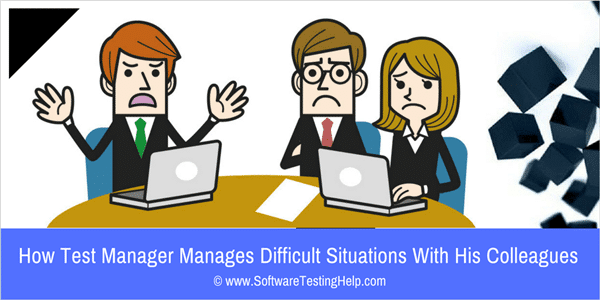 Practical Tips To Deal With a Difficult Coworker

Someone from a different section is making your life miserable.

When you have no common manager, how will you handle it? You’ll have to use a method called feedback. This involves talking to other people about the problem, in a non-confrontational and helpful way.

The 10 principles of feedback are very simple and can be applied to both characters as well as work-based issues. You can use feedback from colleagues, managers, and juniors.

#1) Obviously, you need to speak to the person in remote, and at a time when none of you is in a rush. Decide in advance, what key points you want to make, and prepare ways of saying them that do not include:

#2) When you speak to the person, emphasize on yourself and not on him/her.

#3) Clarify why you feel this way: ‘I can’t meet my targets if I don’t have the information to do the job’.

#4) Now let the other person express his/her thoughts. Listen to them and show that you’re attentive.

#5) Be ready to be criticized in turn.

#6) Emphasize on how they behave, and not what they are (in your view).

#7) Be prepared to quote actual cases wherever possible.

#8) Be optimistic as well. Tell them, when they have been helpful, by promptly giving what you needed.

#9) Suggest an explanation and see how the other person feels. This is very important as you can’t change their personalities, but behavior.

#10) Attend to the other person’s response and be prepared to compromise with them. (You may even learn something about how you appear to others. And be able to adapt your own behavior and improve your performance.)

A colleague upsets you in a meeting.

How often do people get sensitive and angry, when they have all the arguments on their side and they know they’re going to win? They don’t need to. So as soon as anyone starts to get irritated, you know that you’ve got them on the run.

Nevertheless, you don’t want a colleague who spits blood at you. You will be far more popular with the meeting and look far more like a good raise prospect to your managers – if you can keep the proceedings calm and enjoyable as you graciously win the battle.

And the technique for doing this is very simple. You need to remain peaceful. Don’t respond with the sentiment but simply pick out the facts of what is being said. And deal with those, as you would, if the person is talking calmly. If they keep criticizing you, just wait patiently before you reply, until they run out of steam.

A decent chairperson should intervene to let you speak but if they don’t, appeal to them by saying, calmly and politely, ‘May I respond to that point?’

This might sound as though your opponent will get to do all the talking and you are incapable to put your case across. But it doesn’t work like that. Not only they will look very senseless- if they are the only ones losing control of their sentiments but also they aren’t likely to keep it up for very long- if they don’t get a fiery response from you.

They will burn out fast (after a brief period where you look cool and reasonable while they look like a two-year-old child), and the discussion will become calmer.

There are two main reasons why anyone turns upfront meetings into compound war zones. And you’ll need to work out on what is going on (it could be both):

Broadly speaking your goal should be to win the dispute obviously, but do it in a way that makes your colleague feel as positive and fruitful as possible. After all, you can afford to be generous over the details if you’ve won the battle.

For a start, be as nice and welcoming as you can. Ignore criticisms or personal put-downs. You will only rile your opponent if you are egotistical, sarcastic or smug. The kinder you are, the less they will mind losing to you and the less they will fight the status battle alongside the practical quarrel that you’re debating.

You’re in immense trouble if you step into the other people’s toes, in a meeting. Your colleagues will not want to share their expertise with you. People are obviously territorial and you forget it at your threat. So don’t even think about putting forward the idea which involves reducing someone’s responsibilities unless you:

Taking tasks away from people isn’t the only way you can tread on their toes. No one likes it if you will give the imprint that you know more about their department or their area of expertise than they do. So don’t make worn statements about other people’s territories.

A colleague in your team is not performing well but your manager can’t understand it.

This will only be a problem when your colleague’s poor performance is making your work life more problematic. If this isn’t the case then it’s frankly, none of your business. If your own work is being negotiated then you need to act.

A colleague frequently puts an emotional burden on you.

Have you ever heard any of the following?

‘I’m going to be in real chaos if you don’t help me out with this.’ Or

‘Just this once . . . I’ve been so under the weather lately and I just can’t manage with this as well’. Or

Emotional blackmail is a popular gun in getting people to do whatever the blackmailer wants. Such people are playing on your fault, or your desire to be popular, to manipulate you into doing things their way.

There are some steps you can do.

A colleague in your team is being devious.

Good manipulators never leave any evidence. You can’t prove that they’ve been devious. But you know it anyway. There’s no point in stimulating them directly because they’ll deny it. So make them feel that you want to help and not point the finger.

You are being sexually harassed by a co-worker.

It can be rigid to define sexual harassment – what one person enjoys as flirting may be considered as harassment by another. However, once you’ve made it clear that you are considering this behavior as harassment then the person doing it should respect it.

You realize that one of your colleagues is breaking the guidelines.

For a serious crime such as theft, you may feel appreciative to report your colleague.

But what if it’s a matter of minor pilfering or a minor fiddle of the expenses? Or maybe they’re taking time off when the manager thinks they’re on company business? You can feel much cooperated by this kind of rule-breaking. You don’t want to be a snitch but you don’t want to be unfaithful to the company either.

The best solution is to say to your colleague: ‘I don’t want to land you in trouble but I know you’re breaking the guidelines. I will not say anything this time but if I will find you doing it again I shall feel obliged to tell the manager.’

We hope you enjoyed reading this informative article on how to deal with a difficult coworker!!