Here, we will run a basic TestNG program using TestNG annotations and also see the role of TestNG Listeners and how to use them in testing. 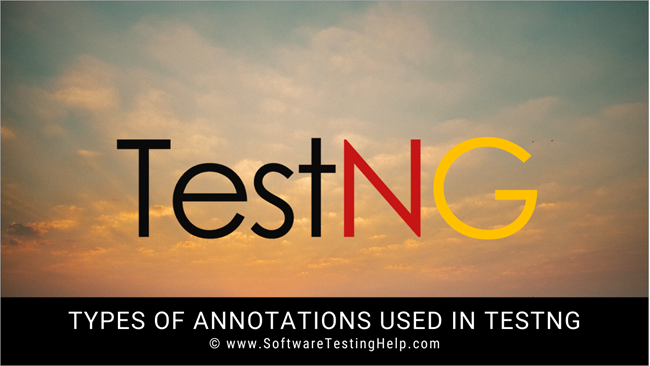 What Are TestNG Annotations?

These are the program or business logic that are used in controlling the flow of methods. They play a very important role in TestNG. These annotations differ in each project as per the requirements. The flow of annotations remains the same in every program in spite of the different requirements.

There are different types of TestNG annotations that make TestNG easier and better than JUnit. Each of these Annotations will run at a specific event in the TestNG.

Types Of Annotations In TestNG

Given below are the lists of Annotations and their attributes that are used in TestNG. Let’s explore them and their usages in detail.

When we execute the TestNG.xml file, the TestNG annotations will be executed in the following sequence:

@Test has a lot of other attributes that help us in executing our test cases more effectively.

Below are the types of attributes and their descriptions with examples.

#1) alwaysRun: When set to true, this method will run even if it depends on a method that has failed.

#2) dataProvider: This shows the name of the data provider for this method. It has attributes only i.e. name. We can use it when we test our software with multiple sets of data at input time or run time. This is also known as Data-driven testing. We can do Data-driven testing using this attribute.

#4) dependsOnGroups: This attribute depends on the list of groups i.e. the test method will start execution only after the dependent groups are executed.

Note: If any of the tests in the groups that are dependent on fails, then it will skip that test.

Below is the Example:

#5) dependsOnMethods: This annotation depends on the list of methods. This means the test method will start execution only after the dependent methods are executed.

Note: If any of the tests in methods that are dependent fails, it will skip that test.

#6) alwaysRun=true: We can set the attributes on a test method to true, and this will force the test to be executed even if some of the tests in the group depend upon fail.

#7) description: This provides the description for the method. Generally, it contains a one-line summary.

In those cases, we can simply ignore/disable that particular test by setting this feature as @Test(enabled = false).

#9) expectedExceptions: This attribute shows the list of exceptions that the test method is going to throw in the run time. If no exceptions or any other exception is thrown for the method, then the test is marked as a failure.

#10) groups: This attribute is used to specify the groups that the test method belongs to.

#11) priority: This helps in prioritizing the test methods, while the default priority starts with 0 and the tests are executed in the ascending order.

Results: Below are the results as per priority, even though no number was assigned to the first test, it took its priority by default as 0 and the execution was done in ascending order.

#12) timeout: This attribute helps in specifying a timeout value for the test (generally used as milliseconds). If the test takes more than the specified time out value, then the test is marked as fail. We can use this timeout for doing a performance test, to make sure that the method is returning within a reasonable time.

#13) invocationCount: This attribute helps in determining the number of times a test method should be invoked.

The above example shows that this test will take a total of 4 seconds to execute and each time the test is invoked/run, it would take 1 second to execute.

#15) @DataProvider: This method helps in supplying data for a test method. First, we have to declare a method annotated by @DataProvider and then use this method in the required test method using the “DataProvider” attribute in the @Test annotation.

A Data provider returns an array of objects especially a two-dimensional object array [][]. The first array represents a data set and the second array contains the parameters.

#16) @Factory: This is used to specify a method as a factory for providing objects that are to be used by TestNG for its test classes. By using @Factory, we can create dynamic tests at run time and it should return an array object.

Let’s take an example to understand it better. We will create two classes i.e. FactorySample.Java and FactoryTest.Java

Difference Between @Factory And @DataProvider Annotations

There is a basic difference between both the annotations. There is a lot of confusion regarding these two annotations like where to use these and why?

@DataProvider: This annotation will parameterize the particular test method and execute the test in a specific no. of times based on the data provided by this method.

For example, if there are two parameters, then the test method will be executed twice. For instance, if we want to login to a site with different sets of usernames and passwords each time, then this is useful as we have to provide the parameters to test.

@Factory: This will execute all the test methods present inside the test class file while using a separate instance of that class. This is useful if we want to run the test class any number of times.

For example, if we have to test the login function of any application or website and as we have to run this test multiple times, it’s better to use @Factory where we can create multiple instances of test and run the tests.

Let’s take a look at these examples to know the difference.

Note: In the above program we have provided two data and the program result would be:

This shows that if we increase the number of data in the message method, then the print method will execute the same number of times.

TestNG Factory is very useful when we have to run multiple test classes using a single test class.

For this, we have to create two test classes with few test methods inside them.

Now we have to define the @Factory method which returns an object array of the above-defined classes.

In simple terms, Listeners listen to the event defined in the Selenium script and behave accordingly to it. The main purpose is to create logs and customize the TestNG reports.

There are many types of listeners available in TestNG.

However, when it comes to testing, we only use a few of them as discussed below:

This is a listener for test suites. It consists of two methods i.e. onStart() and onFinish().

Whenever we implement this listener, it will guarantee that the end-user will invoke the methods onStart() and onFinish() before and after running a TestNG suite.

void onStart(ISuite suite): This method is invoked before the Suite Runner starts.

void onFinish(ISuite suite): This method is invoked after the Suite Runner has run all the test suites.

This listener works just like the ISuiteListener. However, the only difference is that it makes the call before and after the Test and not the Suite. It is a listener for test running and this listener has seven methods in it.

(i) onStart(): This method is invoked after the test class is instantiated and before any configuration method is called.

(ii) onFinish(): This method is invoked after all the tests have run and all the configuration methods are called.

(iii) onTestStart(): This method is invoked each time before a test will be invoked. The ITestResult is only partially filled with the references to class, method, start millis and status.

(iv) onTestSuccess(): This method is invoked each time when a test succeeds.

(v) onTestFailure(): This method is invoked each time when a test fails.

(vi) onTestSkipped(): This method is invoked each time when a test is skipped.

It is a listener that monitors the beginning and end of a TestNG run. It has two methods i.e. onExecutionStart() and onExecutionFinish().

It is a listener that gets invoked before and after a method is invoked by TestNG. This listener is invoked only for configurations and test methods. It has only two methods in it i.e. afterInvocation and beforeInvocation.

This is implemented by the clients to generate a report. This method will be invoked once all the suite has run and the parameters give all the test results that happened during that run.

In this article, we have seen how TestNG Annotations can be useful in making our Program logic easier. Annotations are used as needed.

You can pass the parameters to the annotations and do Data-Driven Testing as well. You can run the test cases in groups and save time. With listeners, you can even generate the reports. Don’t you think this is wonderful?

TestNG.xml will be explained in detail in our upcoming tutorial. This XML file is the backbone of the TestNG framework and it will help us in executing our test cases.