In this Tutorial, we will Understand What is MapReduce, its Advantages and how does Hadoop Map Reduce work with Examples:

In the previous tutorial, we learned about Hadoop HDFS and the Reading and Writing Mechanisms. Now let us explore another Hadoop Component i.e. MapReduce.

Let us look into the following in detail: 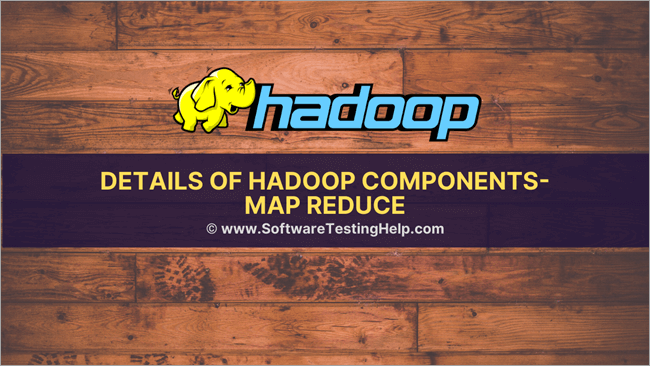 Let’s move on and start with Hadoop Components. As explained earlier there are two main components of Hadoop i.e. Hadoop HDFS and Hadoop Map Reduce.

The Hadoop HDFS is a File Distribution System which is used for storing a huge amount of Data in multiple racks. 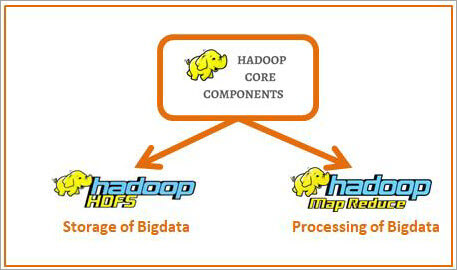 Here we will discuss the processing unit of Hadoop i.e. MapReduce.

The next question that arises is “what is Map Reduce and why it is required?” 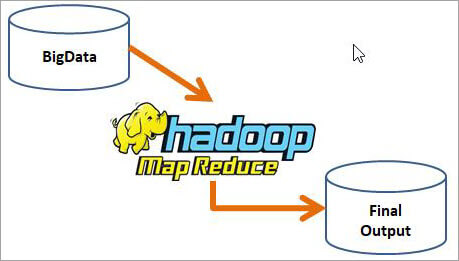 Hadoop MapReduce is the “Processing Unit” and using this component, we can process the Big Data stored on Hadoop HDFS.

But what is the exact requirement? Why do we need this component of Hadoop?

Hence a native client application like Java or any such application cannot process the data in the current format and we need a special framework that can process the fragmented data blocks stored in respective DataNodes.

Map Reduce In A Nutshell 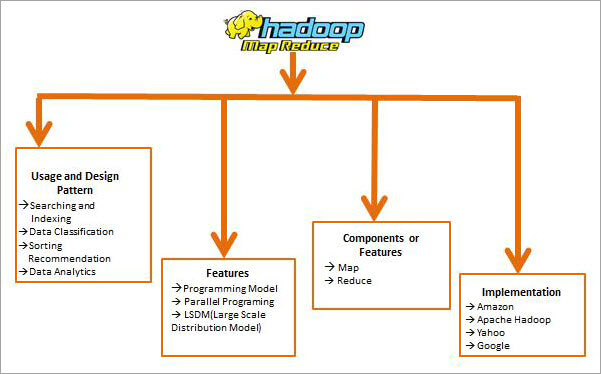 The above diagram gives an overview of Map Reduce, its features & uses.

Let us start with the applications of MapReduce and where is it used. For Example, it is used for Classifiers, Indexing & Searching, and Creation of Recommendation Engines on e-commerce sites (Flipkart, Amazon, etc.) It is also used as Analytics by several companies.

When we see from the features perspective, it is a Programming Model and can be used for Large Scale Distributed Model like Hadoop HDFS and has the capability of Parallel Programming that makes it very useful.

When we see the functions in Map Reduce, two functions get executed i.e. Map Function and Reduce function.

This technology has been implemented by major organizations like Google, Yahoo, Facebook and also adopted by Apache Hadoop like HDFS, PIG, HIVE and for storing data or executing & processing the Big Data using HBase which is also known as No-SQL.

There are two advantages to this technology.

The very first advantage is parallel processing. Using Map Reduce we can always process the data in parallel.

As per the above diagram, there are five Slave Machines and some data are residing on these Machines. Here, the data gets processed parallelly using Hadoop Map Reduce and thus processing becomes fast.

Actually what happens here is that the entire chunk of data gets divided by Hadoop HDFS into HDFS Block and the Map-Reduce processes these chunks of data and thus processing becomes fast.

This is one versatile thing that is given by Hadoop MapReduce i.e. we can process the data where it is.

In the previous HDFS tutorial, we understood that the data that we moved into Hadoop Cluster gets divided into HDFS Blocks and these Blocks are saved into SlaveMachines or DataNodes. The Map-Reduce senses the processing and logic to the respective Slave Nodes or DataNodes where the data is residing as HDFS Blocks.

The processing is executed over a smaller chunk of data in multiple locations in parallel. This saves a lot of time as well as Network Bandwidth that is required to move Big Data from one location to another.

Just remember the data we are processing is Big Data broken down into chunks, and if we start moving the Big Data directly through the allotted Network channels into a centralize machine and process it, then it will give us no advantage as we are going to consume the entire Bandwidth in moving the data to a centralized server.

So using Hadoop MapReduce we are not just doing “Parallel Processing”, we are also processing the data on to the respective Slave Nodes or DataNodes where the chunks of data are present and hence we are also “Saving a lot of Network Bandwidth” which is very beneficial.

The Slave Machines send the result back to the Master Machine, these results are aggregated together and the final result is sent back to the Client Machine which submitted the job.

Here one question arises- who decides which data should be processed at which DataNode?

The Client submits the job to the Resource Manager and the Resource Manager is the one who provides the direction to execute the job on the respective DataNodes where the data is residing, it decides based on the nearest DataNode that is available so that a lot of Network Bandwidth is not utilized.

To explain this we will take a real-life analogy of the Insurance Company’s Policy Holders Application Count, everyone would be aware of Insurance Company Policies, as most of the big insurance companies are having their branches in various cities.

In those branches, there are “n” numbers of people who have applied for Life Insurance Policies.

Let’s take a scenario where we have five insurance company branches where people come and apply for Life Insurance Policies. Now we also have one headquarter of that insurance company which has all the information on the branches that are available and located.

This is how the cost is involved along with the huge efforts in doing this activity. 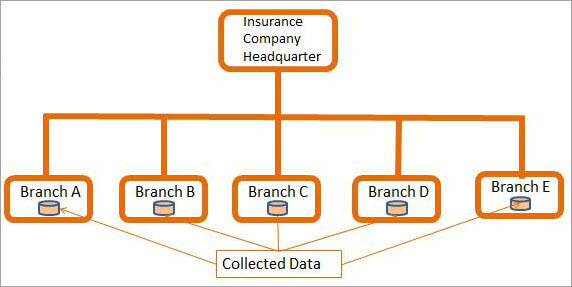 Another aspect of this is the overburdened Insurance Company Headquarter, as it has to process all the applications that were applied by the people for policies in the respective branches.

As the Insurance Company is processing the applications that were applied in all the branches, it’s going to take a long time. In the end, this process doesn’t work very well.

MapReduce follows Data Locality i.e. it is not going to bring all the applications to the Insurance Company Headquarters, instead, it will do the processing of applications in the respective branches itself in parallel.

Once the applications that were applied to every branch were processed, they send back the processed details to the Insurance Company Headquarter.

Now the Insurance Company Headquarter just has to aggregate the number of processed applications that were sent from respective branches and keep the details in their respective Database or Storage Centre.

In this way, the processing will be very easy and quick and the Policy Holders get the benefits in no time.

In our previous example, we had an input (applications) that were distributed among various branches and every input was processed by the respective Map Function.

We know that MapReduce has two functions i.e. Map Function and Reduce Function.

The aggregated processed application details are given as the Output.

This is what happened in our previous example. The entire process was divided into the Map Task and Reduce Task.

To understand it in a better manner, let’s go through the anatomy of MapReduce. 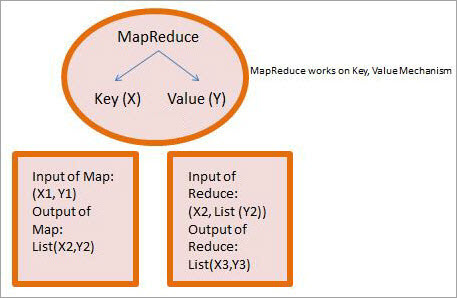 Finally, the Reducer gives us a list of the Key-Value pairs.

Let’s take another example i.e. Word Count Process the MapReduce Way. This example is the same as the introductory example of Java programming i.e. “Hello World”. 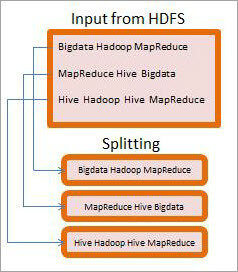 So, for line 1 the offset is the Key and the Value is Bigdata Hadoop MapReduce. In real life, the line number or the offset is a hexadecimal number, however, to make it easy, we will only consider it as number 1 or 2. 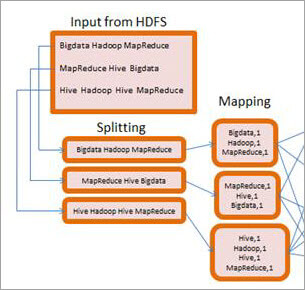 It is because Bigdata is one count so Bigdata, 1. Similarly, Hadoop, 1 and MapReduce, 1 are itself having one count that’s why we mark one (1) as a Value. In the same manner for second-line or say line 2 we have, MapReduce Hive Bigdata.

So in the same fashion, the Mapping Function again creates the list of Key-Value Pairs for it and thus as per the count, the Key-Value pair list will be MapReduce,1 Hive,1 and Bigdata,1.

We will get the same as a result of the Mapping Function for line 3 i.e. Hive, 2 Hadoop, 1and MapReduce,1.

Let’s move on to the Shuffling Phase, in this phase for every Key there is a list prepared. The Shuffling phase will find the appearance of Key Bigdata and it will add the Values into the list. So let’s see what is happening here. 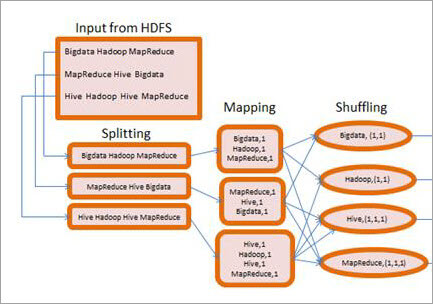 Similarly, when we see the word Hadoop, again for Hadoop another list will be prepared for Values. As we can see two incoming Arrows are pointing to Shuffling which means the word Hadoop will be picked up from list 2 and list 3 respectively, i.e. the final result after Shuffling will be Hadoop, (1, 1).

In the same fashion, we will get the rest of the words like Hive, (1, 1, 1) and MapReduce, (1, 1, 1) along with their list of Values or say the list of Count as per the availability of words in the respective lists. 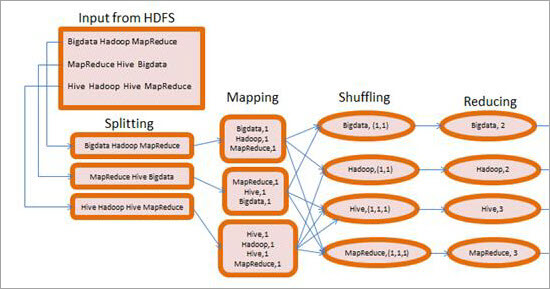 At last, the final result will be sent back to the Client as shown in the below diagram of “The Overall MapReduce Word Count Process” 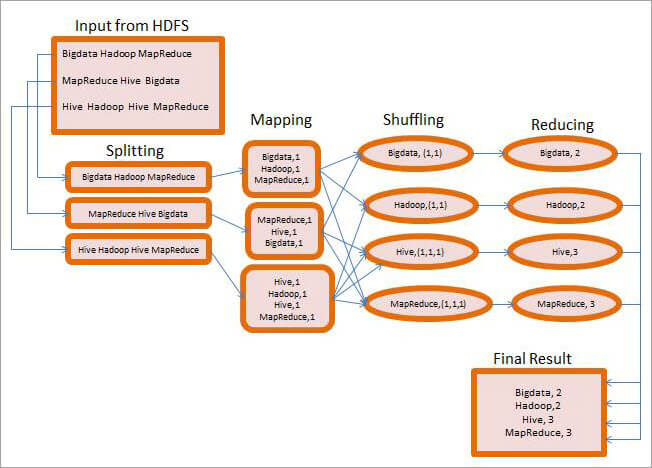 This is how the entire Word Count process works when you are using MapReduce Way.

In this tutorial, we learned the following:

That’s all for this tutorial, in our upcoming tutorials we will cover: