Detailed Tutorial On Frequent Pattern Growth Algorithm Which Represents The Database in The Form an FP Tree. Includes FP Growth Vs Apriori Comparison:

Apriori Algorithm was explained in detail in our previous tutorial. In this tutorial, we will learn about Frequent Pattern Growth – FP Growth is a method of mining frequent itemsets.

As we all know, Apriori is an algorithm for frequent pattern mining that focuses on generating itemsets and discovering the most frequent itemset. It greatly reduces the size of the itemset in the database, however, Apriori has its own shortcomings as well.

Read through our Entire Data Mining Training Series for a complete knowledge of the concept. 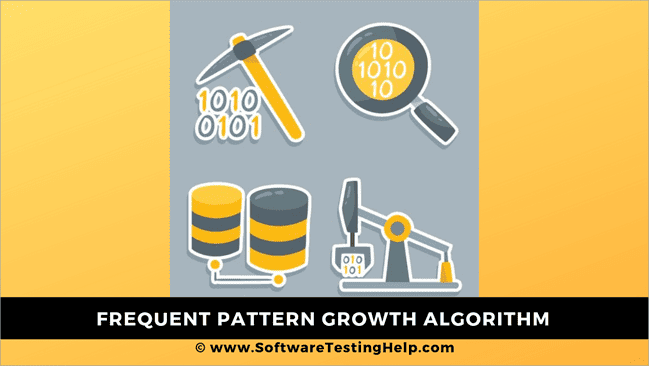 These shortcomings can be overcome using the FP growth algorithm.

This algorithm is an improvement to the Apriori method. A frequent pattern is generated without the need for candidate generation. FP growth algorithm represents the database in the form of a tree called a frequent pattern tree or FP tree.

Frequent Pattern Tree is a tree-like structure that is made with the initial itemsets of the database. The purpose of the FP tree is to mine the most frequent pattern. Each node of the FP tree represents an item of the itemset.

#2) The second step is to construct the FP tree. For this, create the root of the tree. The root is represented by null.

#3) The next step is to scan the database again and examine the transactions. Examine the first transaction and find out the itemset in it. The itemset with the max count is taken at the top, the next itemset with lower count and so on. It means that the branch of the tree is constructed with transaction itemsets in descending order of count.

This means that the common itemset is linked to the new node of another itemset in this transaction.

#5) Also, the count of the itemset is incremented as it occurs in the transactions. Both the common node and new node count is increased by 1 as they are created and linked according to transactions.

#6) The next step is to mine the created FP Tree. For this, the lowest node is examined first along with the links of the lowest nodes. The lowest node represents the frequency pattern length 1. From this, traverse the path in the FP Tree. This path or paths are called a conditional pattern base.

Conditional pattern base is a sub-database consisting of prefix paths in the FP tree occurring with the lowest node (suffix).

#8) Frequent Patterns are generated from the Conditional FP Tree.

1. Count of each item

2. Sort the itemset in descending order.

4. Mining of FP-tree is summarized below:

For Example, Apriori and FP growth use:

The ECLAT will have the format of the table as:

This method will form 2-itemsets, 3 itemsets, k itemsets in the vertical data format. This process with k is increased by 1 until no candidate itemsets are found. Some optimizations techniques such as diffset are used along with Apriori.

This method has an advantage over Apriori as it does not require scanning the database to find the support of k+1 itemsets. This is because the Transaction set will carry the count of occurrence of each item in the transaction (support). The bottleneck comes when there are many transactions taking huge memory and computational time for intersecting the sets.

The Apriori algorithm is used for mining association rules. It works on the principle, “the non-empty subsets of frequent itemsets must also be frequent”. It forms k-itemset candidates from (k-1) itemsets and scans the database to find the frequent itemsets.

We hope these tutorials in the Data Mining Series enriched your knowledge about Data Mining!!