In-Depth Tutorial On Apriori Algorithm to Find Out Frequent Itemsets in Data Mining. This Tutorial Explains The Steps In Apriori And How It Works:

In this Data Mining Tutorial Series, we had a look at the Decision Tree Algorithm in our previous tutorial.

There are several methods for Data Mining such as association, correlation, classification & clustering. 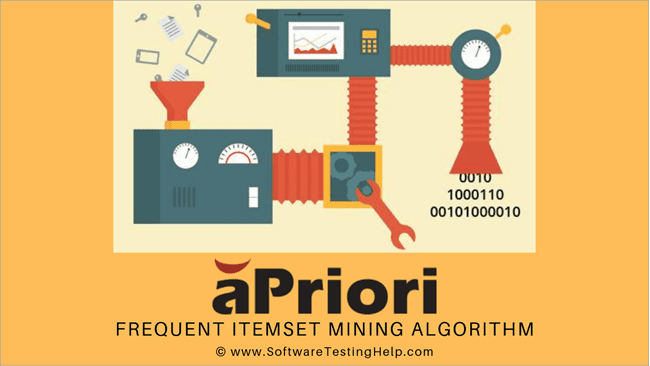 What Is An Itemset?

For Example, Bread and butter, Laptop and Antivirus software, etc.

What Is A Frequent Itemset?

For frequent itemset mining method, we consider only those transactions which meet minimum threshold support and confidence requirements. Insights from these mining algorithms offer a lot of benefits, cost-cutting and improved competitive advantage.

There is a tradeoff time taken to mine data and the volume of data for frequent mining. The frequent mining algorithm is an efficient algorithm to mine the hidden patterns of itemsets within a short time and less memory consumption.

The frequent pattern mining algorithm is one of the most important techniques of data mining to discover relationships between different items in a dataset. These relationships are represented in the form of association rules. It helps to find the irregularities in data.

Frequent itemsets discovered through Apriori have many applications in data mining tasks. Tasks such as finding interesting patterns in the database, finding out sequence and Mining of association rules is the most important of them.

Association Rule Mining is defined as:

“Let I= { …} be a set of ‘n’ binary attributes called items. Let D= { ….} be set of transaction called database. Each transaction in D has a unique transaction ID and contains a subset of the items in I. A rule is defined as an implication of form X->Y where X, Y? I and X?Y=?. The set of items X and Y are called antecedent and consequent of the rule respectively.”

Learning of Association rules is used to find relationships between attributes in large databases. An association rule, A=> B, will be of the form” for a set of transactions, some value of itemset A determines the values of itemset B under the condition in which minimum support and confidence are met”.

Support and Confidence can be represented by the following example:

The above statement is an example of an association rule. This means that there is a 2% transaction that bought bread and butter together and there are 60% of customers who bought bread as well as butter.

Support and Confidence for Itemset A and B are represented by formulas:

Frequent itemset or pattern mining is broadly used because of its wide applications in mining association rules, correlations and graph patterns constraint that is based on frequent patterns, sequential patterns, and many other data mining tasks.

Apriori algorithm was the first algorithm that was proposed for frequent itemset mining. It was later improved by R Agarwal and R Srikant and came to be known as Apriori. This algorithm uses two steps “join” and “prune” to reduce the search space. It is an iterative approach to discover the most frequent itemsets.

The probability that item I is not frequent is if:

The steps followed in the Apriori Algorithm of data mining are:

#1) In the first iteration of the algorithm, each item is taken as a 1-itemsets candidate. The algorithm will count the occurrences of each item.

#2) Let there be some minimum support, min_sup ( eg 2). The set of 1 – itemsets whose occurrence is satisfying the min sup are determined. Only those candidates which count more than or equal to min_sup, are taken ahead for the next iteration and the others are pruned.

#3) Next, 2-itemset frequent items with min_sup are discovered. For this in the join step, the 2-itemset is generated by forming a group of 2 by combining items with itself.

#4) The 2-itemset candidates are pruned using min-sup threshold value. Now the table will have 2 –itemsets with min-sup only.

#6) Next step will follow making 4-itemset by joining 3-itemset with itself and pruning if its subset does not meet the min_sup criteria. The algorithm is stopped when the most frequent itemset is achieved. 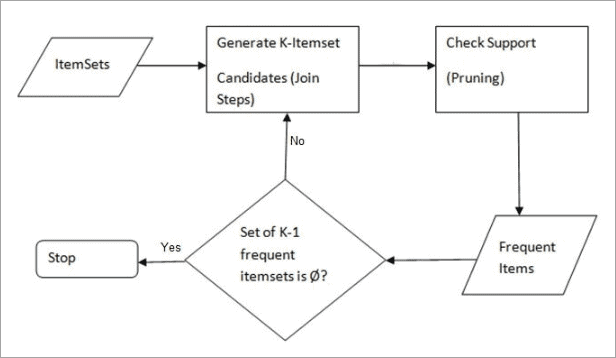 1. Count Of Each Item

3. Join Step: Form 2-itemset. From TABLE-1 find out the occurrences of 2-itemset.

6. Generate Association Rules: From the frequent itemset discovered above the association could be:

This shows that all the above association rules are strong if minimum confidence threshold is 60%.

Many methods are available for improving the efficiency of the algorithm.

Some fields where Apriori is used:

Apriori algorithm is an efficient algorithm that scans the database only once.

It reduces the size of the itemsets in the database considerably providing a good performance. Thus, data mining helps consumers and industries better in the decision-making process.

Check out our upcoming tutorial to know more about the Frequent Pattern Growth Algorithm!!