A comprehensive list and comparison of the top Online C++ Compilers with features and pricing. Select the best C++ IDE from this list:

The C++ program or any software program must be compiled and executed to produce the required output. Hence after writing the program, the most important step is to compile the program and then run the executable generated by the compiler.

Thus we need to have an optimum compiler to run our programs. In C++ we have many types of compilers, some of which are independent of operating systems and some others are specific for an operating system.

In this tutorial, we will discuss the various C++ compilers that come packaged with the Interactive Development Environment (IDE). 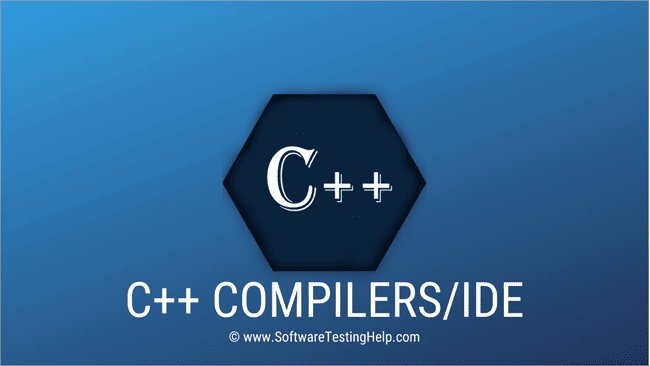 When a compiler is integrated with IDE, we get the entire package at one place so that we can complete the code, compile, debug, and execute the program in the same software.

IDEs have an attractive user interface and come packaged with all the elements of software development that can be used to develop software applications.

In this tutorial, we will discuss the C++ compilation process along with some of the top C++ compiler/IDEs that are available in the market.

A C++ program consists of a header file (.h) and a source file (.cpp). Apart from this, external libraries or files are linked to C++ program using the <include> directive.

The compilation of the C++ program includes 3 steps:

The Compilation Process can be summarized using the below diagram. 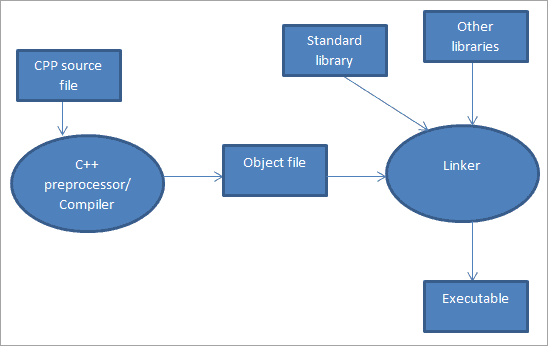 This entire compilation process consisting of three steps is carried out with a click of a button in the case of IDEs. There are various IDEs that run as desktop applications and there are few other compilers that can be accessed online too.

Let’s first discuss standalone C++ compilers/IDEs and then see some of the popular online C++ Compilers.

The basic view of Microsoft Visual studio 2019 community edition is shown below. 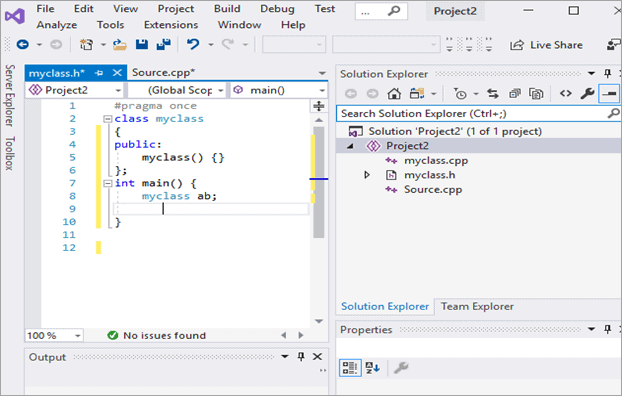 An Eclipse IDE generally looks as shown below. 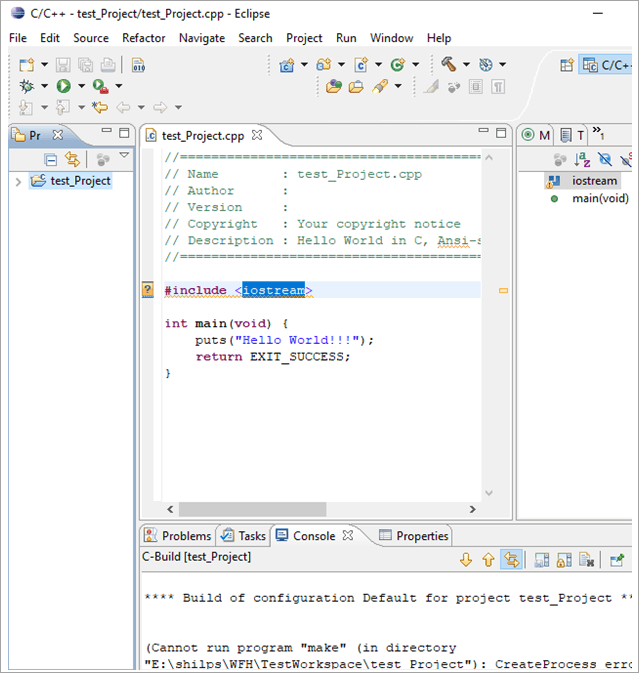 Eclipse is a widely used IDE for C & C++ development and also for Java development. Eclipse works on all the major platforms including Windows, Mac OS & Linux, and boasts powerful features that can be used to develop full-fledged projects.

A screenshot of the CodeBlocks IDE is shown below. 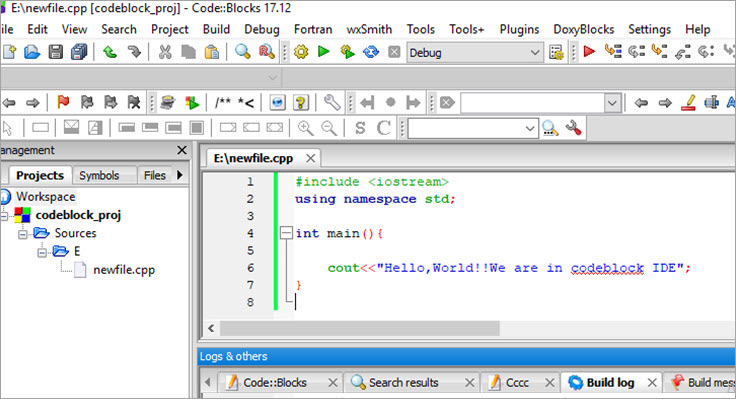 Code:: blocks is a free and open-source IDE that provides coding support for C, C++, FORTRAN, and XML to name a few. Code:: Blocks IDE is a popular IDE and it provides support for multiple compilers.

The image of Dev-C++ IDE is shown below. 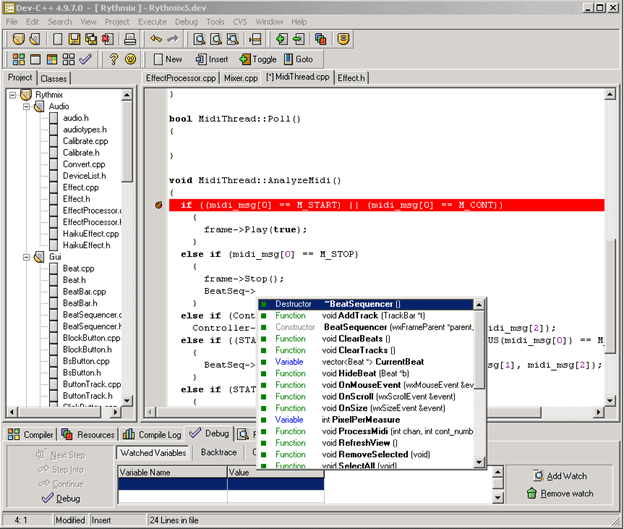 Dev-C++ is written in Delphi. It is a free (open source) fully-featured IDE that is used for programming in C and C++. Dev-C++ IDE is distributed under the GNU General Public License.

NetBeans IDE looks as shown below while creating a new C++ project. 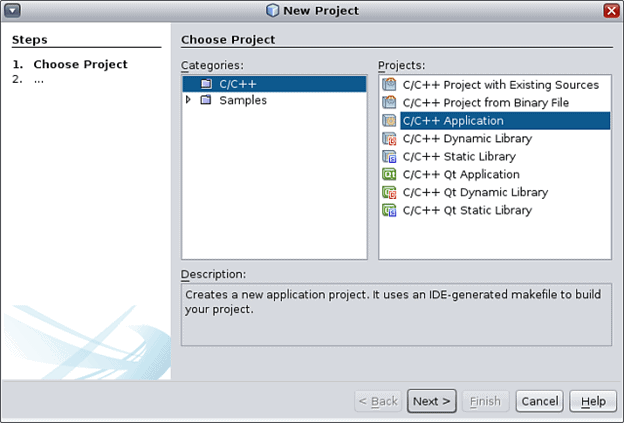 NetBeans is a free and open-source IDE that has interfaces for developing applications in C/C++, Java, PHP, Groovy, JavaScript, HTML5, etc. NetBeans is cross-platform and works on Windows, Linux, and Mac OS systems.

Cygwin IDE looks as shown below.

Cygwin is an open-source C++ compiler that can be installed on Windows and it gives a Unix-like environment to develop C++ programs. We can install Cygwin using the setup.exe and then install Cygwin packages for features support.

The screenshot for GCC Compiler is shown below.

Note: As Cygwin IDE also uses the GCC compiler, we have given the same screenshot.

GCC stands for GNU Compiler Collection. GCC is developed by the GNU project and is a compiler system that supports multiple programming languages.

The GNU is a toolchain and GCC is one of the key components of this toolchain. GCC is the standard compiler for most of the projects at GNU and Linux. One of the notable projects that uses GCC is the Linux Kernel.

Vim editor looks as shown in the below screenshot. 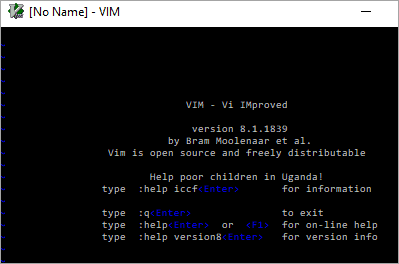 Vim is a text editor that is highly configurable and is used for efficiently creating and changing any kind of text. Vim is included as “vi” with most UNIX systems and Apple OS X. Vim is a very stable IDE and is continuously enhanced to become even better.

The Borland C++ Compiler window looks as shown below. 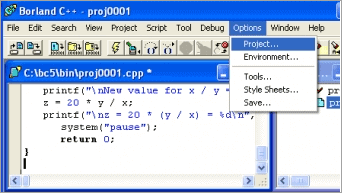 Borland C++ is a C/C++ programming environment (IDE) developed for Windows and MS-DOS. Borland C++ is a successor of Turbo C++ and comes with a better debugger i.e. Turbo Debugger written in protected mode DOS.

The below image shows the MinGW installation manager setup tool. 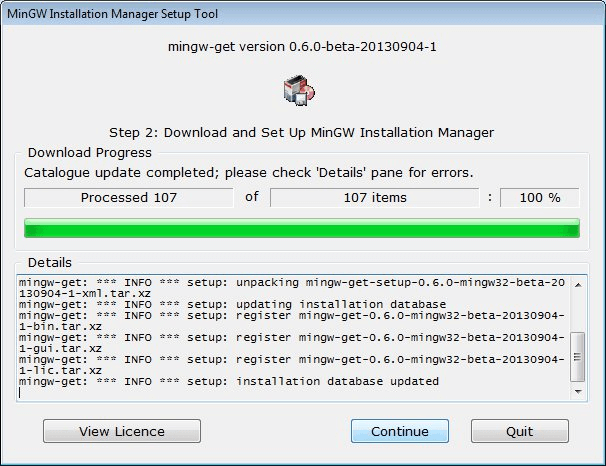 C++ builder IDE is shown below. 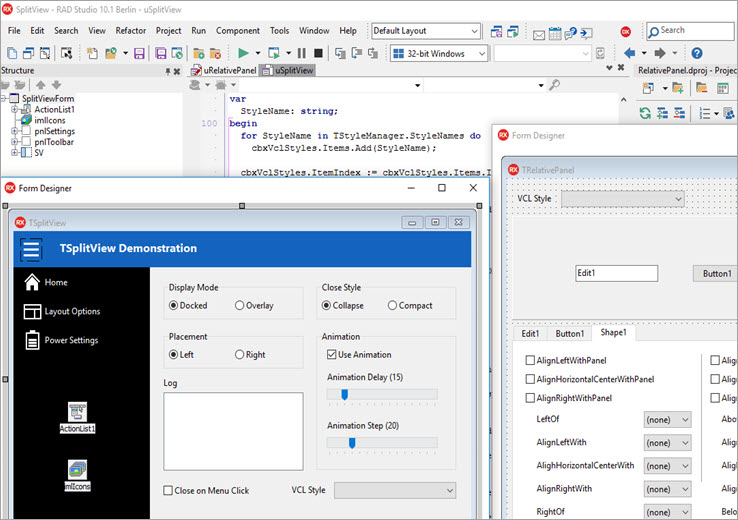 The C++Builder is a cross-platform IDE that allows us to develop the full development lifecycle to deliver a single source codebase that we can simply recompile and redeploy whenever required.

Codelite IDE is shown below. 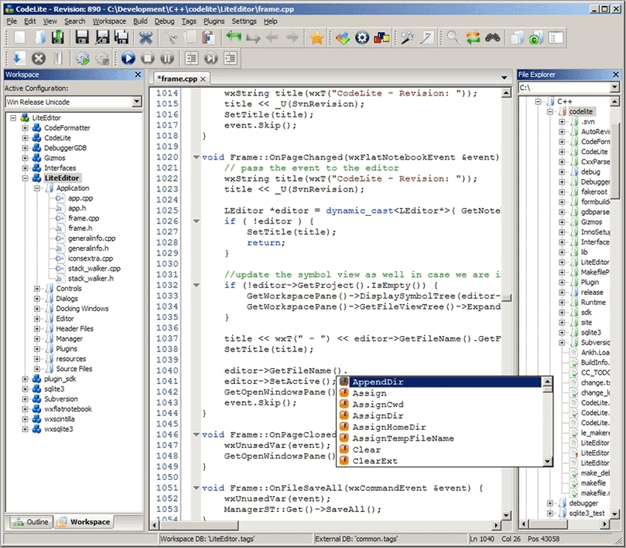 CodeLite is an open-source IDE. Codelite is cross-platform as it supports different platforms i.e. Windows, Linux, Mac OS, and FreeBSD. It is used for C/C++ development.

The welcome screen for the QT framework looks as shown below. 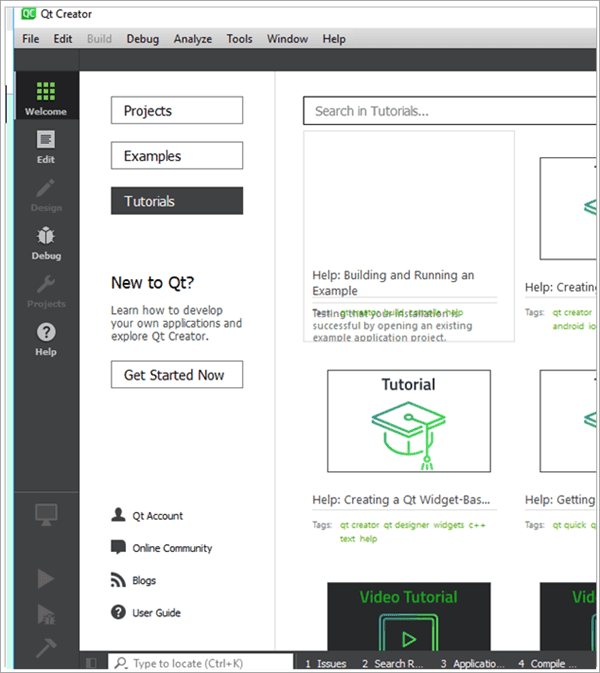 QT framework is the IDE that is available under dual licensing mode and the developers can choose the license as per their requirements.

Clang is an “LLVM native” C/C++/Objective-C compiler. It aims to deliver amazingly fast compiles. It is a platform for building great source level tools, and extremely useful error & warning messages. The clang compiler contains the Clang Static Analyzer tool that automatically finds bugs in your code. 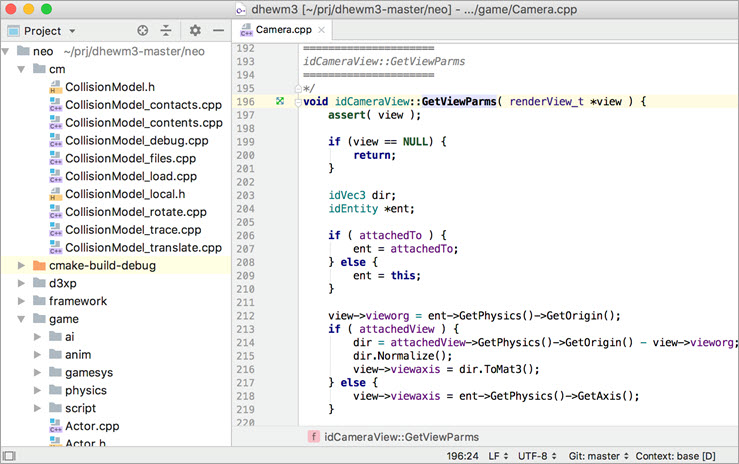 Clion is a powerful, cross-platform IDE for C/C++ development. It includes contemporary C++ standards, libC++ and Boost. Along with C/C++ development, Clion is also designed for Kotlin/Native, Rust, and Swift.

XCode is a powerful IDE that contains an open-source LLVM compiler for C, C++ & Objective-C and is available from the terminal. XCode is developed for Mac OS and contains a suite of software development tools developed by Apple for developing software for macOS, iOS, iPad, watchOS, and tvOS.

Let’s now discuss some of the online compilers that are available for C++ programming. These are mostly free and can be used to practice programming. Most of the compilers listed below support more than one programming language.

The screenshot for Ideone online compiler is given below. 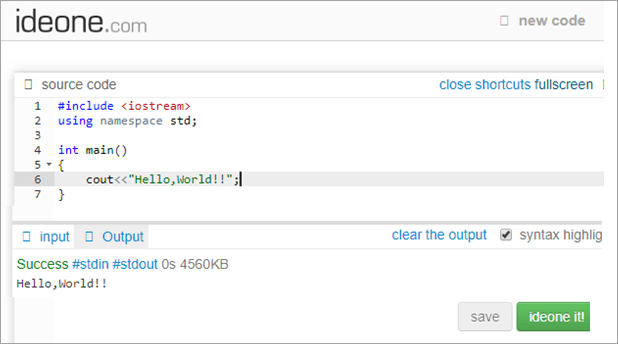 Ideone is an online compiler and a debugger. It allows us to compile source code and execute it online and supports more than 60 programming languages.

Codepad was created by Steven Hazel – one of the founders of Sauce Labs. Codepad is a simple collaboration tool to compile/interpret the code online. We can paste the code in the code area, select the appropriate programming language in the left panel, and click submit for Codepad to execute it.

The below image shows the OnlineGDB compiler. 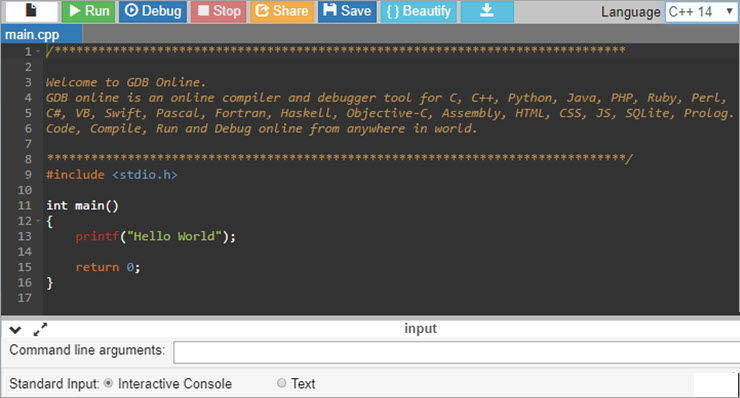 The Codechef online compiler looks as shown below. 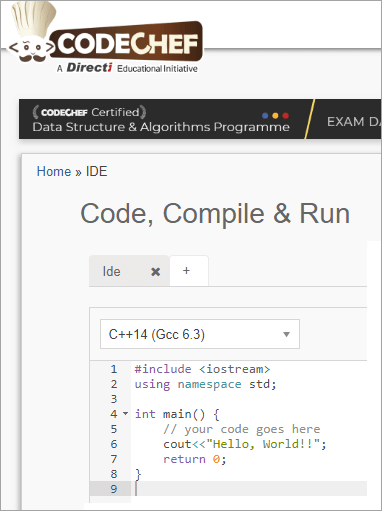 Codechef is a platform for aspiring programmers. Codechef provides an online compiler that can be used to execute code in various languages.

The Cpp.sh online compiler looks as shown below. 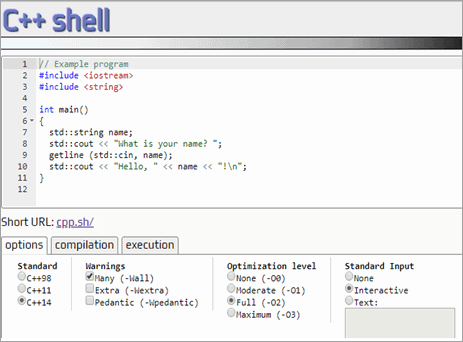 Cpp.sh is a simple frontend for the GCC compiler. This compiler uses GCC 4.9.2, with Boost 1.55 available.

The screenshot for JDoodle is given below. 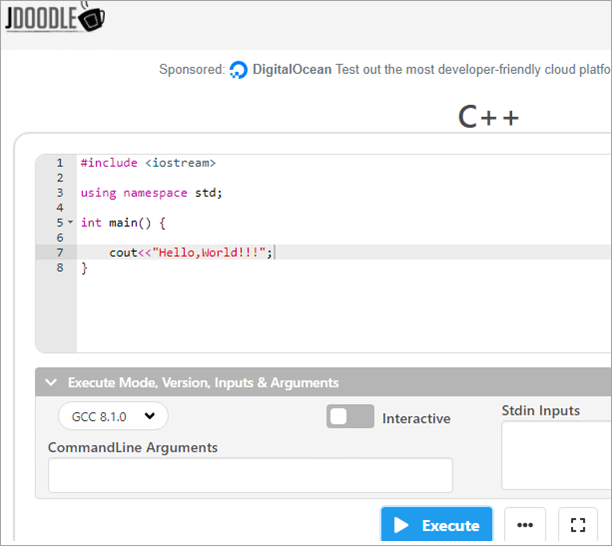 JDoodle is an online compiler that supports various programming languages including C, C++, Java, Java (advanced), etc. The JDoodle C++ compiler shown above is a frontend for the GCC compiler.

C++ Compilers and IDEs are important from the viewpoint of programming. Using these IDEs, we can develop and build many advanced C++ applications. The main advantage of these IDEs is that we get the entire compilation process in one IDE.

We can even develop UI applications and most IDEs have resource managers that allow us to just drag/drop resources and a skeleton code is written by the IDE for these resources.

Most of the IDEs come with inbuilt debugger and/or other features like memory leak detection etc. that save our time and efforts.