This tutorial explains the features of the two Source Code Editors Atom and Sublime Text and provides a comparison of Atom vs Sublime:

Whether you are new to coding or an old-time code addict, you need a code editor sturdy enough to handle everything you can throw at it.

There are so many code editors out there in the market, and among those choosing the right one is always a challenging task. This tutorial will not just answer the question “What is the finest code editor for developers?”, it will compare two source code editors of the millennium i.e. Atom & Sublime Text. 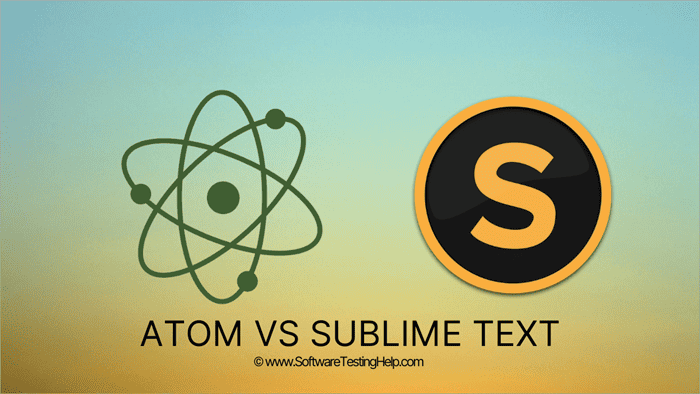 We cannot put the code editor into a single type as one editor which works for a developer might not be suitable for the other.

In the market, there are many of them, from the simplest ones like notepad++ or vi, that allows you to write code and color it to make it easier to read, to the most complex editors like NetBeans, XCode, IntelliJ which provide a complete development environment which includes integration with version control systems, testing frameworks, debugging kit, etc.

In this tutorial, we will focus on comparing two medium complexity source code editors i.e. Atom and Sublime Text since they are the blend of both simple and complex on one hand and are robust enough to make the development agile, fast, and efficient.

Overview Of Sublime Text And Atom

The comparison makes it easy for the developers to choose the right code editor based on their requirements. So, while Sublime Text is the editor best known for its sophistication, Atom is called the hackable text editor of the 21st century.

Before comparing Atom and Sublime, let us have a brief overview of these two editors as per their official documentation.

It is a source code editor for macOS, Linux, Windows platform which support plug-ins written in Node.js. It has Git Control embedded in it. It is developed by GitHub.

It is a shareware source code editor that supports plug-ins written in Python. It mainly supports many programming and markup languages.

Atom Vs Sublime Text: A Comparison

Let us have a glance at the comparison of Sublime Text vs Atom:

Let us compare Atom vs Sublime Text editors in detail based on the following categories:

#1) Setting Up The Editor

Prior to comparing these editors based on set up, let us first see the installation of these on the Windows platform. 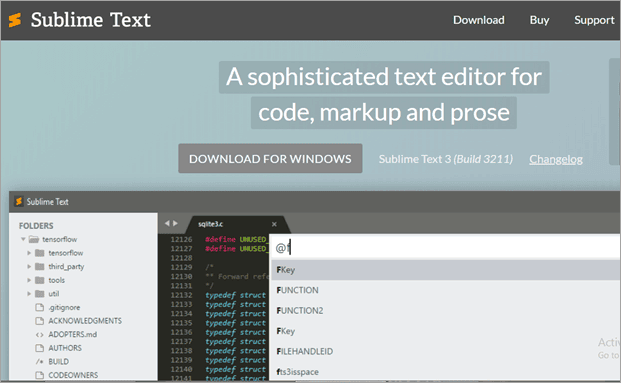 Step #2: Run the executable file. This defines the environment variables. As you run the file, you will see the window as shown below. 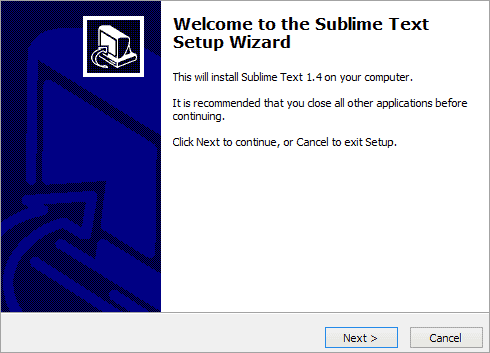 Step #3: Choose the location where you want to install the Sublime Text editor and click Next. 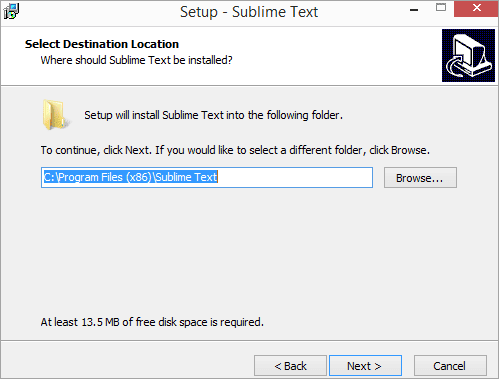 Step #4: Verify the location of the folder and click on Install. 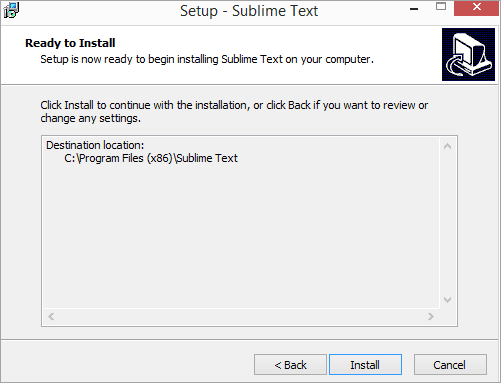 Step #5: Now click on Finish to complete the installation. 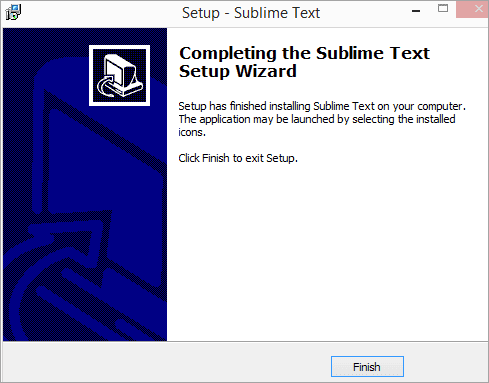 Step #6: On successful installation, you will see the editor will appear as below: 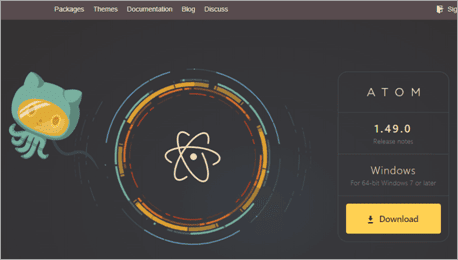 Step #2: As you run the downloaded file, the below window will appear.

Step #3: As installation is complete, the Atom editor window is launched. 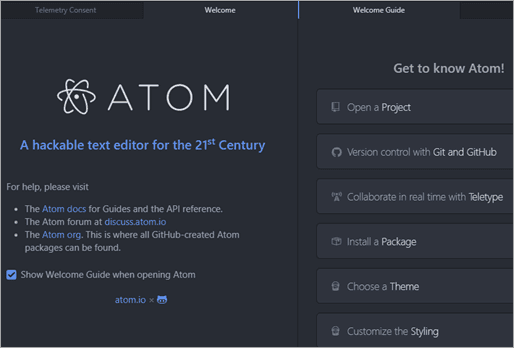 Atom and Sublime get installed with a couple of mouse clicks. Both the editors are available for Windows, Linux, and OS X. One thing you will quickly notice is that Atom weighs well over 170MB, which is way far than the traditional HTML editors, while Sublime weighs less than 6MB.

We will discuss it further in the performance evaluation of these editors. Once you install the editors, you are ready to go.

Atom is flexible for users. It generates packages that add to its hackable core. Another interesting feature is the “Fuzzy finder” that finds any file for you. Also, with the help of a tree view, users find it easy to open and view any file in the current project. One thing that annoys an Atom user is to figure out which additional package needs to be installed when starting from scratch.

In contrast, it is critical when working in Sublime Text projects. Coding, markup, and prose show the utmost level of sophistication in Sublime Text editor. Finding a snippet of code in amidst thousands of files happens quickly in Sublime. Here, speed never lets its users down. It lets the developer leverage the power of fast coding.

Navigation happens in Sublime with the help of Command Palette.

Both the editors come up with a heap of shortcuts to make the work of the user faster enough. Mostly Atom shortcuts are somewhat similar to the Sublime Text. Also, we can customize the shortcut keys as per our own ease in both of these editors. The only difference lies is, in Atom these things come up as inbuilt but in Sublime Text, you have to set it up manually.

The degree of customization an editor gives to match the development flow and style is a very vital prospect. Atom has a very descriptive doc page that gives detailed information on how to hack even the styles. It has a very great feature of overriding settings on a per-file type basis. For example, different indentation for JS vs. CSS vs. HTML is quite easy with Atom. On the Sublime Text side, there are fewer bunches of packages. 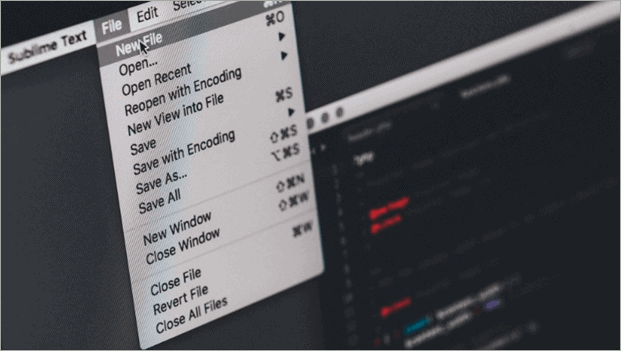 Being a product of GitHub, Atom comes ready with the git integration. While editing any project, you will notice that tree view has color indicators for the uncommitted files. It also shows the name of the current branch on the status bar.

On the contrary, Sublime Text does not have built-in integration with the source code repository but has few tried and tested integration from external packages like Git, SVN. 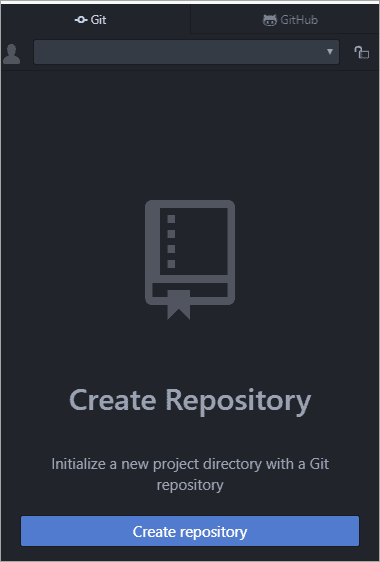 Sublime Text has an extensive user list with tons of questions every month on stack overflow, endless blogs on various features. On the same side, though Atom is new as compared to Sublime Text, it has a very active community on the development and the support front. Also, being backed up by GitHub, the Website discussion boards all look blazing.

Atom is an open-source editor that comes free as part of the MIT license whereas Sublime costs $80. Here in Sublime Text, price does not seem to be the deciding factor as the paid and free Sublime version only differs by means of an occasional pop-up screen to turn off the “unregistered” status.

The hardcore Sublime users readily pay $80 for an autonomous developer who has developed a superb product as a memento of gratitude.

Performance is the key part of any text editor that is being used by the developers. Sublime is way advanced than the Atom when it comes to performance.

As they say, size can make or break a software tool. Atom being the heavier in size is slower than Sublime Text. It shows response lags issues when it comes to jumping between multiple files. On the contrary, you will not feel any lag when working with Sublime Text.

For looks, Sublime Text does not seem to be catchy however with a huge user base, they prefer to install hundreds of themes to gain customizable user experience. Sublime Text has an ample number of themes that the user can install to make the best user experience. On the contrary, Atom comes up with many inbuilt out of the box things. In Sublime, users have to set up certain out of the box things manually.

So, which one do you think is the best editor?

In our opinion, both Atom and Sublime Text are good text editors with loads of features and third party packages to make the development fast and easier. Both serve their best to specific user requirements and market needs. No editor is better than the other.

If you are already using Sublime Text and have given a lot of time choosing and installing favorite packages, then switching to the Atom does not make any sense since both the editors almost provide the same packages one or the other way. In addition to this, for the load-bearing capability, Sublime text can take a lot more load than Atom.

One tremendous thing that Sublime has is the feature that when you open Sublime Text, you will see your files exactly the way you left for the last time, regardless of whether or not you have saved them.

Though Atom has shown a tremendous speed improvement in the past few years, it is still behind Sublime in terms of switching between multiple files and slow load time. On the other hand, as we have seen most packages of Sublime turning obsolete due to lack of community, it needs to think more about open-sourcing some of its frameworks in order to compete with modern era code editors.

Lastly, if you are looking for a new editor, you can choose anyone out of these two since both of them are a good choice. You just have to spend a decent amount of time to get used to its shortcut keys, finding packages that make your development fast and easier on any of these editors.

Hope this Atom vs Sublime Text comparison provided you an overview of the features of Atom and Sublime Text editors. After reading this article, you will surely be able to decide which editor to choose as per your requirement.