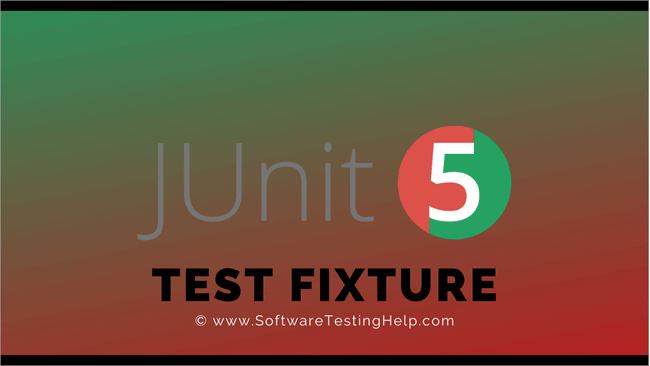 The holistic understanding of the term ‘Test Fixture’ is a fixed state in a code or a set of fixed steps in a code that is used as a precondition and few other sets of steps that are used as postcondition for all the tests.

Thus, in other words, we are identifying those sets of statements that will repeat for all tests and thereby, try setting a fixed environment for our test methods to run.

The purpose of using Test Fixture is to eliminate the duplication of the common code for all the testcases.

Let’s try to understand the practical implementation of the test fixture in a JUnit test.

In this section, we will go through two examples of the JUnit 4 test and try to understand how to use the approach of Test Fixtures in our code along with the sequence of different lifecycle annotations @Before, @After, @BeforeClass, @AfterClass, and @Test.

Of course, there will be a separate tutorial on annotations which will clarify what these are and how each of the annotations works. As of now, let’s stick to the understanding of the Test Fixture usage in the code.

In this example, we will have the test fixtures in the class with three test cases. The setUp() method with @Before annotation and tearDown() method with the @After annotation.

The resultant console window will be as shown below:

The console window makes it obvious that before every test run, the setUp() method executes, and after each test completes, the tearDown() method runs.

Thus, the sequence of execution per the annotation for every test method is:

Remember that the tests though here, have executed in sequential order i.e. test_JUnit1(), test_JUnit2(), test_JUnit3(), there is no sequence defined to the test, hence they may execute in any order. Each test is isolated from the other test.

The postClass() method under @AfterClass annotation runs once in the end when all the tests including the test under @After are executed and completed.

The sequence of the test run is as follows:

The methods under @BeforeClass and @AfterClass are commonly shared by the class which is why if the methods are not declared as static then it gives an initialization error on execution of the test.

See the below screenshot, where we have not set the preClass() method under @BeforeClass annotation as static and thereby the test has errored on execution.

You may see the result showing initialization Error which could be eliminated on marking the method as static. The same goes for the method postClass() under @AfterClass annotation.

We have tried to set a context on the good programming practices to be followed by implementing the Test Fixture approach and a basic understanding of usage and sequence of execution for the lifecycle annotations.

In our next tutorial, we learn about the different ways of executing JUnit tests in Eclipse. So keep tuned to the series as we progress with more interesting aspects of JUnit.