So far, we have been learning about agile and its methodologies. We also learned about one of these methodologies – Scrum – in detail.

In our previous tutorial we learned about Defect Triaging in Scrum.

In all these tutorials, we continuously used a term which is nothing but, self-sufficient teams or self-organized teams.

Though it is quite widely used, this term Self-sufficiency is not explained much in detail anywhere in the agile literature. 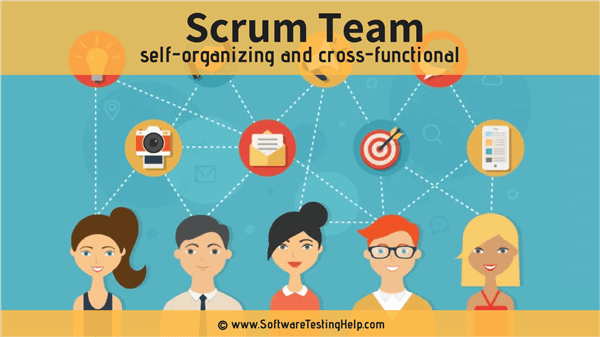 In this tutorial, we will try to understand what it means to be self-sufficient or self-organized.

We will also see the advantages of being self-organized and what steps should be taken to become self-organized. It is not an easy task, rather it is a continuous process which requires constant effort.

As per the scrum guide, “Scrum Teams are self-organizing and cross-functional in nature”.

When we say, a team is Self-organizing & cross-functional, we mean that the team is capable and competent enough to achieve their work without seeking help from anyone outside the team.

The team excellently manages its work throughout the entire sprint without being directed or instructed by anyone else. Thus it is advisable to have a self-organizing and cross-functional team to encourage the team to optimize work which conclusively increases the flexibility, creativity, and productivity.”

The Development Team self-organizes to undertake the work in the Sprint Backlog, both during the Sprint Planning meeting and as required throughout the Sprint and manages well to accomplish what’s needed to build the increment.

This very well explains the concept of self-organizing teams. Basically what it means is that instead of being ‘pushed’ for the work items, the scrum team proactively focuses on ‘pulling’ up the work items. The approach is not from top to bottom but from bottom to top.

Scrum teams themselves proactively decide what work they want to prioritize and finish off first from the Sprint Backlog. And they are the ones who give an estimate of the effort involved and how much time it will take to deliver the shippable product.

No one else can and should tell them how to go about it. Another thing that the team should be cognizant about is to commit only for the work items that they can comfortably accomplish within the sprint. The team doesn’t have to overwhelm itself by committing to more work than it can comfortably achieve in the sprint.

However, it is not as easy as it sounds. Even the founder of agile, Ken Schwaber admitted that it’s easier when said than done as it is not in our nature to be self-managed. Since childhood first parents, then teachers then bosses and the government, they all teach us how to live and how to proceed in certain situations.

They keep guiding the path rather than letting us follow our own path believing that their way is the best. Thus it doesn’t come naturally to us to be self-managed.

Like everything else, this too has to be taught and it is the responsibility of the scrum master to make sure that the team has an experience of managing itself and can take the responsibility to finish off the product as promised.

They need to develop a culture where they let the teams be self-sufficient while still guiding them on how to be self-sufficient. The scrum master should again not tell the team as of how to do the work and what work should be done in order to be agile.

They both need to learn how to approach management in a new way to be truly agile and self-organized.

In conclusion, a self-organizing team pulls work for itself and manages the allocation, estimation, and delivery on its own. Though they still need mentoring, they surely don’t need commands. They have all the required skills and if necessary, they reskill members to manage the work within themselves. 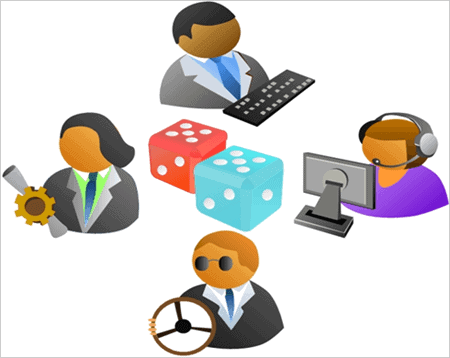 Self-sufficiency is when the team can achieve its goals on time without going out for help with the available skills and resources. This is not a task but a process and hence it implies continuous learning and self-improvement.

Scrum believes a self-sufficient team to be:

Key Indicators of a Self-Sufficient Team

All successful self-sufficient teams have the following characteristics:

#1) Democratic and motivated: They don’t have a leader or a manager. The scrum master just helps to remove impediments in the path of these self-organized teams that manage its backlog on its own as they feel ownership of the team goals.

#2) Cross-functional: Scrum teams have all the required skills and competencies to achieve the sprint goals that are available within the team itself.

#3) Inspect: The self-sufficient teams regularly catch up in the daily standup and sprint retrospective meeting to inspect upon their progress and take actions if there is any course correction required.

#4) Collaborative: Scrum teams work as a team instead of a group of people. They collaborate and self-manage to accomplish their work and do not let the communication gaps hinder their progress.

#5) Trust: Team members trust each other to help them out with the issues and have a healthy respect for the diverse skill set that each of them brings to the team.

#6) Committed: The self-sufficient teams are committed and focused on achieving the sprint objective. The team makes sure that the work is delivered on time and the potentially releasable increment is developed at the end of every sprint.

How to Create a Self-Sufficient Scrum Team?

Creating a self-sufficient team is not a one person job and it indeed requires organizational level support from the management. The responsibility to deliver on this lies with the scrum master who has the key responsibility to make sure that the team takes the ownership without micromanaging their day to day working.

The scrum master has to be actively aware of the fact that while coaching the team has to be self-organized and they don’t start influencing the team operations with their own views of how things should be done.

The scrum master is a coach for the team in the sense that they make sure that the team is following all the rules of scrum (E.g. the daily scrums should occur daily, the whole team should participate, they should lead the meetings themselves and not wait for the scrum master to initiate the discussion, etc.).

At an organizational level, the team needs all the team members to be trained in Scrum and the other technical skills required to deliver the project.

Since a scrum team is self-sufficient and cross-functional, it is very important that they have all the diverse skills required to deliver so that they don’t have to look outside the team for any help at a later stage.

Then comes the role of a scrum master who is there to guide the team when they need support and removes any impediments that they might face during the course of delivery. The scrum master is there to provide need-based coaching and make sure that the team becomes more and more self-sufficient as time progresses.

Coming up next in the series is a tutorial on “The Three Amigo Principle” – An activity which brings everyone on the same page with respect to understanding the requirements before directly jumping on to the development phase.

In this tutorial, we will be discussing who these three Amigos are and how do they help in delivering the solution at a faster pace by benefiting from the feedback loops.