In this IPTV Tutorial, we will explore all about Internet Protocol Television including its Definition, Features, Architecture, Protocols, Advantages, etc.:

Internet Protocol TV is very popular nowadays because of its features that allow the subscribers to watch not only the TV shows on their favorite channels but also live broadcasts of their favorite shows, movies, live games like cricket, football, etc and even watching backdated shows of one’s favorite programs. 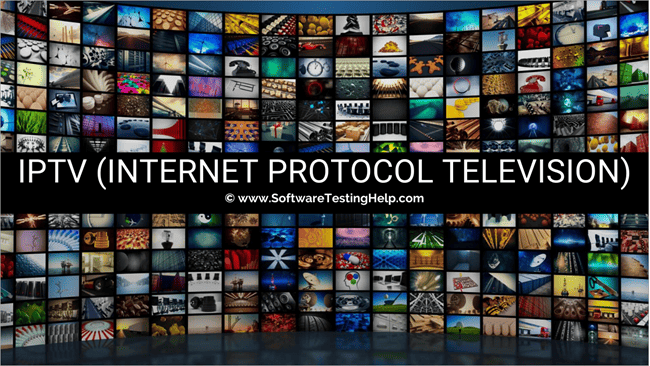 The internet protocol television can be defined as the broadband media that provisions multimedia services in the form of television, audio, video, graphics, etc. distributed over the internet protocol networks directed to provide the desired QoS, security and reliability of the substance.

The IPTV has come out as the most efficient mode of transmission of television programs. Usually, it works on a request basis and broadcasts only the program that is requested by the subscriber. Whenever you alter your channel, it will transmit a new series of a stream for the viewer.

On the other hand, in the conventional mode of transmission of TV programs, all the channels are broadcasted simultaneously.

Its use is not only limited to Internet television but it is most extensively used in the high-speed subscriber based telecommunication networks for accessing the channels into the customer end by using set-top boxes and routers.

Thus, nowadays it can be watched on PC, laptop and even on smartphones if you have a broadband connection to access its services.

#2) Digital Video Recorder (DVR) or Time-shifted television: It permits watching TV shows that were originally broadcast a few hours back or some days back and replay of current ongoing shows.

The users can view their favorite shows later and even if they miss the broadcast of them due to lack of time at the time of telecast on TV.

#3) Video on Demand (VOD): Each user will have a collection of different media files that are stored in his/her device and one can browse and watch them anytime just by selecting them. This feature of Internet Protocol TV uses the real-time streaming protocol for transmission as it deploys unicast mode of transmission.

These days the most demanding VoD services are Netflix and Amazon Prime Video.

Some Features Of Internet TV 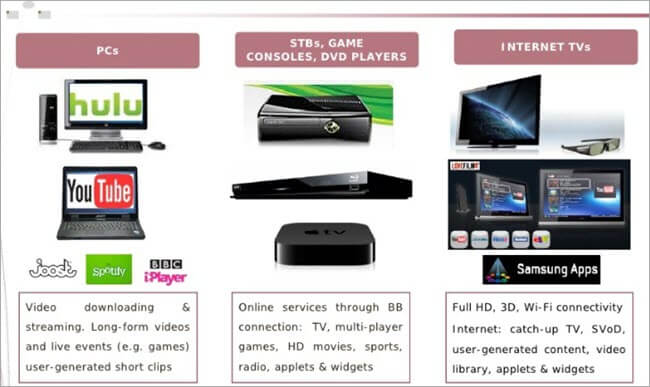 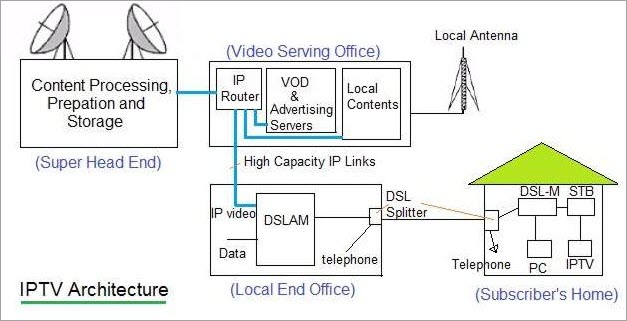 The super-head end wing will download and store all the programs that are broadcast on the national channels of TV on a day-to-day basis.

Then the content of the programs is processed in such a way so that they can be transmitted over the high-velocity internet links like DSL and FTTH links. For the distribution of the IPTV channels, the different multicast IP addresses are used.

The super-head end will float the content to the local office ends by using the multi-program transport stream to the video or data nodes of the far end. The head end acquires the video from various sources and also uses a MPEG encoder and media streamer for delivering the data content.

This will combine and store the local content, video on demand and advertising server within it. It can also broadcast the content by using the wireless antenna as well as the high-speed IP links to the zonal end offices.

The main component at the local end offices is the DSLAM (digital subscriber line access multiplexer) whose main task is to merge the data and the telephony services with the IP video services.

Now the main function of the local end office is to combine all this information and distribute it to the subscriber’s area by using the digital subscriber line (DSL) links or STM links. The DSL will also work as the splitter as it will change the format of the content in the form that can be accessed and required by the end-user.

This can be understood by the example that if the end-user wants the content in the data format then the DSL modem is used to convert the IP data into the format that is compatible with the laptop or desktop. To extract the video content, The STB (set-top box) that makes it compatible to be used on a TV set is deployed.

As the video server networks will utilize huge bandwidths to store and broadcast the stored and on-demand videos, to make optimum use of the bandwidth deployed to these networks, and two architecture models are suggested.

The distributed architecture is a bit complex but it is effective to deliver a large amount of content over large networks that are used with big service providers. 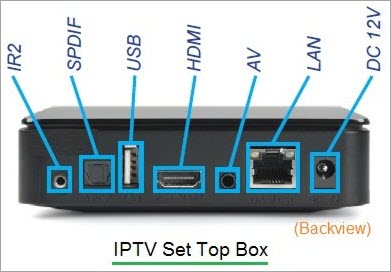 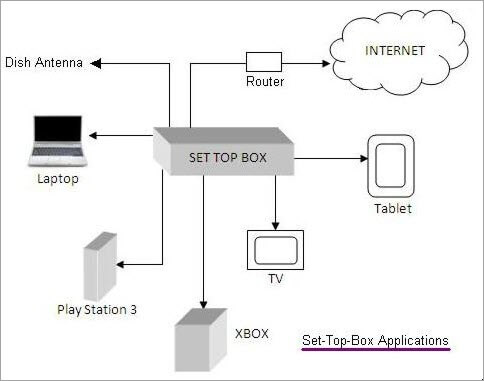 IPTV carries both the video on demand (VoD) service which is a unicast and live TV which is a multicast service. To watch these applications the broadband fixed or wireless IP network is connected via embedded OS devices like tablets, smartphones, game consoles, PC and set-top boxes.

Now the protocols used are as below:

Due to the increase in demand for watching online video sites such as YouTube, the common satellite and cable TV operators should come out with some solution that will maintain their business by allowing the users to watch Internet-based video along with TV channels on the television sets.

Along with this the pay-TV operators also want them to deliver the required service without adding additional cost and infrastructure to their respective networks.

To meet up the requirements of the users as well as the pay-TV operators the Hybrid IPTV is a good solution. It is a combination of the conventional broadcast TV services with the video on demand based on IP networks.

A hybrid set-top box permits the content from various sources like cable and satellite broadcast channels to be merged with the video content that is to be delivered on the IP networks over an Ethernet connection on the device.

Now the television customer can view both the TV channels and the video content from a wider range of available content without the need for any extra infrastructure.

With the hybrid IPTV set-top boxes one can also access several advanced types of services like repeating a TV show, online gaming, shopping, online batting, watching live games and e-governance, etc. on the television set itself.

As a TV operator, the providers have the option to grant access to various services as mentioned above to the consumers as per the requirement and request of the user to enable or disable the service. This provides flexibility without any network and service complexity to both the service provider as well as the end-user.

In this tutorial, we learned various aspects of the IPTV which is one of the most emerging trends of the industry of communication and entertainment nowadays.

We also explored the architecture and mode of working between the various components of the IPTV along with the advantages and limitations.