Learn the Differences Between Git vs GitHub:

If you are either learning or working in the software industry, then you must have come across the terms Git and GitHub frequently.

Sometimes people even use them interchangeably. In reality, both Git and GitHub are related to version control, however, they are not the same.

In this tutorial, we will learn about Git vs GitHub and also walk through the differences between them. 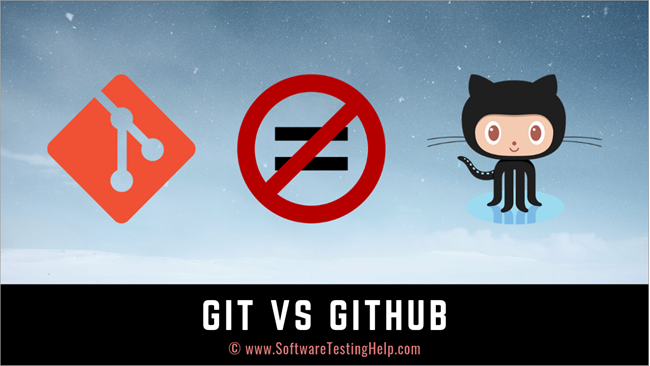 Initially, we need to understand the concept of version control before learning about Git or GitHub.

What is Version Control?

Version control is a system that keeps a record of the changes in a file or set of files. A user can look back at the history of changes on that file(s) by using the version control database and compare the past versions to the current one and see the changes.

All these actions are stored in the version control system which keeps a record of all the versions of the files throughout the changes.

You can consider the Version Control system as a database that takes snapshots of all the changes in your projects and maintains a record of the changes as versions. You can compare the changes and switch between the versions as well.

The version control system can be either be Centralized or Distributed.

Suggested Read => Best Version Control Software That You Must Know

As we are now familiar with the concept of Version Control and its types, let’s move towards Git now.

Git is a distributed type of version control software. Each user has to install Git on their local machine and the server is also supposed to have the Git software installed. Each user can collaborate with the other users by using the Git commands to push/pull/fetch/commit/merge etc.

Let’s consider a scenario, where you are asked to develop software with a functionality called X.

Now after reviewing the functionality Y, your client or business partner thinks that X was better and he wants to go with the functionality X. Now, you might think that if there exists a better way of just going back to X instead of deleting Y and re-writing X. What if, Y is needed again and this is where version control comes into the picture.

Using version control you can manage multiple versions of your code and going back and forth between the versions is just a command away.

Assume that you are now all set using version control. Two more developers are added to your team and are assigned to work on some different functionality which is built over your existing functionality.

Now, you think of sharing your source code as a zip file or some shared location. You are working on your enhancement and your teammates are working on their modules. Now once the functionalities are implemented, the time comes to get everything together.

You might be wondering how can you merge codes. Is there are a better way than going through all the lines of codes and deciding which one to keep and also where should we keep the merged code?

This is when Git comes to your rescue. Git provides the functionality where multiple teammates can work on a piece of code and can merge them at a server and other teammates can sync their codes to get the updated and merged version.

Git is a distributed version control management tool i.e. you can manage versions of your code and easily switch between them as and when required.

You can also collaborate with teammates and merge your codes easily. If the server fails, you can easily get the updated code from the client machines that are on your or your teammates’ machines.

Now that you know what Git is, you must be wondering what is GitHub and where it comes into play in all this version control and management?

GitHub is a web-hosting service for version control using Git. It offers all the functionalities of version control and source code management. It is a service that allows you to host all your repositories online and collaborate with others. Github can be used through a web portal or desktop UI or even the git-shell commands.

The process of committing changes is the same as in Git except after all the changes are committed, you can push your changes to the web (GitHub) and the other users can see your changes and work on the same project in parallel.

Example: Let’s assume that you are using Git and managing your source code well.

But, now there is a requirement where your supervisors want to share your work with the other teams and also access it and read through it. They don’t have any coding skills but want to see when the code was changed and what changes were made etc. and share the code with other teams so that they can re-use the functionality that you have built.

GitHub provides a web-based interface to your Git functionality, your source code, and version control.

All Git commands to merge, fork and commit, etc. are also implemented in Github, and anyone without command knowledge can also change the files. GitHub provides a visual view of the branches, changes to the code, merge conflicts and also forks which other people have created from your repositories.

Git vs GitHub – Know the Differences

Now, that you are familiar with the concepts of Git and GitHub. Let’s understand the differences between them.

After learning about Git and GitHub along with their differences, you would agree that although the underlying aim is the same i.e. providing source code management and ease to merge or share the code, Git and GitHub are different and should not be confused as same.

We hope this tutorial helped you understand the difference between Git vs GitHub along with their usage.