Additionally, we will also discuss a few case studies to clarify the concept. 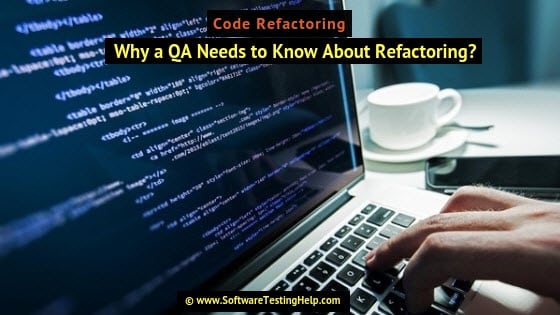 To start with, let us first understand, what actually refactoring is.

Refactoring is essentially a practice or process of improving the code and/or database while maintaining the existing functionality. The idea is to transform inefficient and the over-complicated code to more efficient, preferably simpler and easier code.

Refactoring of code has also picked up momentum with more teams now by following the Agile Software Development approach. Project teams often have limited time to implement new or extend the functionality of the existing features and code that is clean. The code which is easy to understand and maintain certainly goes a long way in meeting the iteration deadline.

If we are maintaining the original functionality of the application or module, a question arises as Why do we even bother refactoring? Well, there are numerous reasons for which a particular module or piece of code may need to be refactored, like:

We will discuss these points in detail in the following sections.

We all can understand that when the food starts to smell it indicates that it is most likely turning bad – this is true for code as well! Code smells are indications that a much serious problem may exist in the code.

Following are some common code smells:

Code smells become more apparent with passing time. As the application or system grows, eventually these code smells start affecting the code development, maintenance and even system the performance in extreme scenarios.

While developing a software, during the limited time and resources available, often we may take shortcuts to achieve the desired results.

Consider a feature that needs to be added to an existing module. After discussion, the team narrows down 2 approaches to add this feature. Approach A, takes 2 sprints to deliver, will be the approved long-term approach. Approach B takes only 5 days to deliver is a messy hard-coded hack that is designed to just service the module in short term.

If the team is under pressure to deliver the feature within a limited time, then they may agree to follow Approach B for now and add Approach A in the backlog for future. By doing this, this team just created the technical debt for themselves.

In simple terms, technical debt in software development refers to the additional rework or overhead required to put the appropriate fixes in place or do things in the ’right way’.

Legacy Systems tend to acquire huge technical debt over time which in turn may make the application susceptible to failure and difficult to support and maintain.

Read more => What is Technical Dept

Agile software development approach advocates incremental development. Without clean, well-structured and easy to maintain code, it would not be possible for teams to extend the existing code with each iteration. If the code is changed without proper refactoring, then it may contribute to code smells or technical debt.

This relationship is depicted in the diagram below 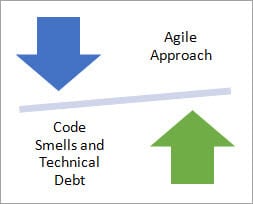 Why a QA Needs to Know About Refactoring?

Whatever we discussed until now in this tutorial seems to be related to coding and looks like the kind of things that a developer should worry about.

Then, why are we discussing this unrelated concept in Software Testing Help Community? Continue reading the rest of this tutorial for the answer to this question.

While refactoring the code, as new code is being inserted, old classes are being updated, new classes are being added, and existing Unit tests may now fail. Additionally, for legacy systems, there may be no unit tests implemented at all. This new unit tests will need to be created and set up from scratch in a majority of cases.

When a feature is being refactored (considering that we are not adding any new functionality), the understanding is that after the required changes are done, a majority of the functionality for the end-user should remain the same.

Refactoring of code may cause functional and non-functional automation scripts to fail.

This may occur due to the following reasons:

It is recommended that the functional automation tests should only be set up once a feature is stable, otherwise it will result in a lot of rework as the feature evolves.

Below is a screenshot of the refactoring menu in IntelliJ IDEA (Community Edition).

We will now discuss some real-life case studies in which I had the opportunity to either work on directly or contribute to indirectly.

Challenges: No major challenges. The module was new, had documented functional and user acceptance requirements, user flows and test cases. Unit tests were set up during the initial launch itself.

Test Approach: The test cases for the module being refactored and the relatively known impacted areas were executed. Any defects were reported and resolved before the release.

Now the company wanted to market this application as a Software as a Service (SaaS), with the expected volume of 300 concurrent sessions initially.

The team did some initial load tests and concluded that the system breaks with a load of 25 concurrent sessions. The team reviewed the code and recommended refactoring one existing core stored procedure that would allow the application to scale up and support up to 500 concurrent sessions without breaking.

Some issues identified with this stored procedure were multiple subqueries within a single query, heavy joins with views instead of tables, use of select * instead of selecting a specific column, etc. Due to these coding issues, the application was fetching more data than that was really necessary, thereby causing the application to slow down and eventually crash.

The approach followed by the team to mitigate risks and work around the challenges:

(i) The team followed a collaborative approach to gather requirements: Project Manager/ Product Analyst and Testers worked closely with the internal end users to understand and document the major functionality and user flow.

Developers also reviewed the code and added relevant information to the requirements document. This was done before the sprint start day.

(ii) The alternate test environment was created to test the change being implemented: Lets’ call these environments as Gamma and Phi. Gamma would have the old code and Phi would have the latest refactored stored procedure deployed at all times.

Having 2 test environments in parallel, almost recreating before – and – after approach, allowed the team to do more in-depth and exploratory testing by comparing the behavior in these 2 test environments, they were able to identify the probable bugs.

The team provided the requirements for an alternate test environment that was provided before the sprint start date.

(iii) End users and stakeholders involved in testing early on: Any obvious issues were caught and reported early on allowing more time for the team to deploy and test the required fix.

(iv) Defining exit criteria and adhering to it: Exit criteria were defined in the initial planning stages – 80% user flows tested, no critical bug unresolved, demo and sign off from the stakeholders before release.

To summarize, refactoring of code is a process to clean/simplify the design of a module without changing its functionality. The refactoring process can be simple, like adding comments, adding correct indentation, removing a static variable, etc. or can be complicated for complex legacy systems.

A particular module or piece of code may need to be refactored because of code smells, technical debt or by following an agile software development approach.

In-depth testing is required to test all the existing user flows to ensure if all functionalities are working as before. Regression testing of the entire application (or impacted areas) is required to ensure that upgrading a module did not unintentionally break the functionality of the other modules.

Test Leads / QA Leads may be required to work together with the rest of the team including developers, Product analyst especially for legacy projects. Be proactive while planning the test approach and test plans. If you anticipate the requirement of multiple test environments or new test tools, then please send the requisition early on to prevent any delays once the testing phase starts.

About the Author: This informative tutorial is written by Neha B. She is currently working as a Quality Assurance Manager and is specializes in leading and managing In-house and Offshore QA teams.

Have you worked on a challenging project which involved refactoring of code or a module/application? If yes, feel free to share your experiences in the comments section for our fellow testers to learn from.

16 thoughts on “Code Refactoring: What You Need to Know About It”