You are so lucky to be in testing, you won’t have to look after all these messy things – prototyping, client confirmation, development, logic, – a frustrated developer;

But I have to look after the mess you created, – a frustrated tester

Most of the time, being in the testing industry, we have experienced mixed emotions – at times it seems really easy and at times it feels really difficult.

Let’s explore together that world of toughness today. And how can we make it easier for us? 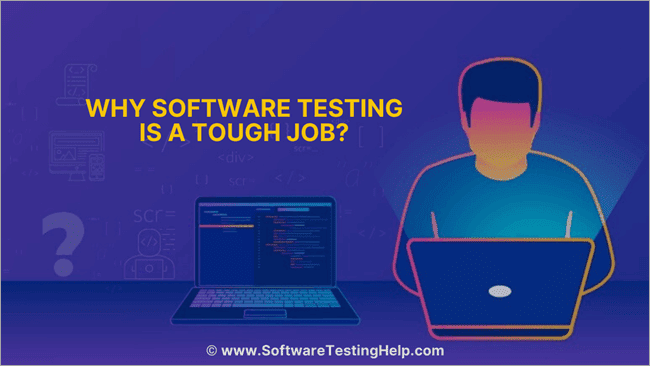 Why Is Testing A Tough Job?

No matter, how much we try, we cannot make the product bug free and that’s why the profession is being seen as unnecessary.

To test software, we put our best efforts in defining coverage, in identifying risk factors, in executing numerous test scenarios, in preparing test reports and in analyzing data but we cannot make the product bug free and that makes us unwanted.

But the truth is – we are helping in making the product qualitative and no one can deny it.

#2) Bugs are being seen as a fault rather than a help:

The traditional thinking is still continued with the new generation of developers. Most of the time (there are rare exceptions too), testers are being seen as problem makers. Bugs reported by the tester are seen as a fault.

Developers don’t like (again there are exceptions) if a bug is found in their code. First, they try to argue that it’s not a bug, then they will try to convince that it’s expected behavior and finally if they have to accept and work on it, they are prone to defer/reject another two bugs by the tester. See here about why your bugs may get rejected.

A common scenario for every software project. No one wants to include testers in finalizing requirements, no one is interested in how the tester thinks about the product, and how the testing team struggles to reach the timeline.

With this, expectations from the testing team is always high – they should prepare all the documents (even though the time for testing itself is very less), they should cover all the scenarios (as a tester you are unforgivable if you missed any test scenario), they should complete testing on time (as test execution is just like executing script), they should report bugs in the best manner possible, they should generate test reports (analysis and reporting really needs time) and finally, they should work as gatekeeper (so that their neck can be caught if customer found any issue).

Please note that by describing the above points, I did not mean to offend developers or anyone else from different departments in developing the product.

How To Make Tester’s Job Easy?

By saying that, I would like to throw some light on how we, as a tester, can be better and can make our job easier:

What would be your response if the product manager says that the ‘Forgot password’ link was not present on the login page because a customer did not specify about it?

If you are going to believe them, sorry dear friend, you are way behind from being a good tester. A good tester does not test better, he argues better too.

When you think something is really illogical, wrongly implemented, misunderstood or not taken care of, please argue and debate till the last level of management. You should not be afraid or nodding the head simply at all times.

Remember, the one who cannot contend for a genuine bug, cannot do testing at all.

As usual, I always emphasize on making the mind work.

That real-time relevance and exercises will help you to think more, to work more, and ultimately to perform in a better way.

Remember, testing is all about ideas (I know I am repeating it :))

No matter whether you are a fresher or carrying 10 years of experience, the moment you stop learning, your career starts decaying. No career sees the learning curve as fast as software testing.

You have to learn about new technologies, on new testing ideas, regarding how to communicate well and convey your thoughts, learn how to analyze data and also to report defects.

Make learning your daily task and you will see wonders. Don’t stop learning, don’t get scared with new things, don’t overlook challenges and don’t be over-confident.

Remember, if you don’t learn, life will make you learn it in a hard way.

Also, read => 10 Qualities that Can Make You a Good Tester

#4) Do testing rather than working:

What is your job profile as a tester? Question

I immediately end up the interview if the person mentions that he/she executes 1000 test cases/day and reports 100 bugs in a week and knows 5 test automation tools.

The real tester does not depend upon numbers; he looks for opportunities to test.

When you learn to see success in getting more coverage rather than executing more test cases, you are a good tester. You are really testing when you are spending the time to reproduce the critical bug rather than adding up low severity/priority bug (someone else will do it on your behalf).

To conclude, I would say, software testing is a passion-driven profession. Whether you choose it by chance or by choice, you can always excel if you want to.

About the author: This nice post is written by STH team member Bhumika M.

Happy testing and as usual waiting for your responses/arguments/input/suggestions.

38 thoughts on “Why Software Testing is a Tough Job? And Here is How You Can Make It Easy”