Several thousands of Software Testers whom I came across had the notion that they are into testing and are solely responsible for quality. Some of them even think that being a tester also empowers them as a God of Quality for the product.

The question I ask you is: Is this for good?

Here is what I think and would like to see you considering these ideas. 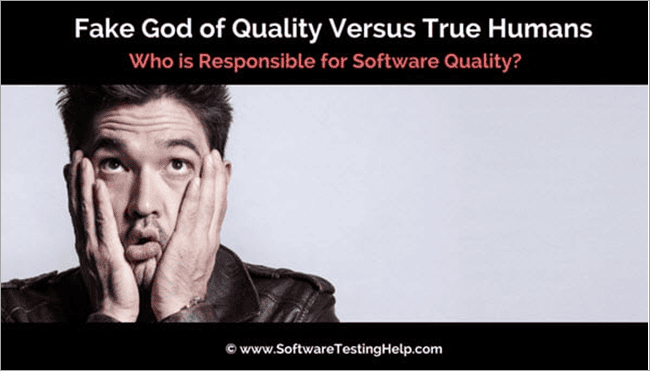 Quality is everyone’s responsibility and not just a tester out there or thousands of them out there. If your family has to be happy, you can’t just assign a person to your family to ensure everyone’s happiness and catch the person responsible if something goes wrong. If a family has to be happy forever, it has to happen with everyone participating and facilitating it.

Similarly, if a product needs to have quality, every stakeholder from customer, requirements, design, development, testing, and support must have equal responsibility towards it.

However, some organizations that are not so serious about testing or fake their seriousness about testing hire a tester for every project to make a tester scapegoat when any of their customers find a bug. These testers who are made to feel as Quality’s God start feeling guilty about the idea of missing a bug and take the responsibility for missing a bug.

This happens because most of the testers have a screwed up understanding of what testing is. They carry an idea of testing as improving the quality while it is not improving quality but finding information about quality.

By reporting bugs – the quality by itself isn’t improving unless someone cares to fix it. Now, if you have been working as a tester you would know that many times by trying to fix a bug, 2 or more new bugs are introduced. So, probably, each bug a tester reports and each bug being fixed and a new one springing up, the quality might be decreasing.

I must also admit that lesser bugs don’t necessarily mean good quality. Jerry Weinberg, a living legend of software testing who was the first person to start a testing team way back in 1960’s defines “Quality is a value to some person who matters” and then Michael Bolton expanded it to “It is a tester’s responsibility to find out who matters and what matters to them”. So fantastic.

Testers start seeing developers as demons who are spoiling quality and get into issues with them. This impacts the performance of the whole team and the developers start disrespecting the testing community itself. So, testers who cause this problem, not only spoil their name but all our names as well in general.

It’s like batsmen accusing bowlers to have given a lot of runs. If a cricket team has to function well then bowlers and batsmen have to work together to make the team win. Sometimes batsmen fail to perform and other times bowlers.

You may want to think of yourselves as humans just as developers and both of you are equally capable of making mistakes. However, focusing on your skills of thinking can help in the success of the entire team.

Guilty of Missing a Bug

If 4 runs are needed off the last ball and a batsman fails to score, is the batsman responsible for the loss of the team?

Let me take this as an open bet: 90% of the testers I have met by travelling to all places in India haven’t read a testing book yet despite several years of experience. You would hardly find a developer who has not read a development related book but testers think everything about testing online is good and fine.

This surprises me – testers don’t test their own learning. How can I believe that they can test even half as good as they claim?

Now, I am not forcing you to change but let me tell you that none of the respected testers of the world has an idea about themselves as God’s of quality or being the only person responsible for quality. You may want to take a clue from it and change but it is you who is causing the change and not me.

If you are willing to change a little further, you must consider thinking:

About the Author:
This article is by Pradeep Soundararajan, our guest author at SoftwareTestingHelp. Pradeep is a renowned tester, thinker, thought leader and an international speaker in Software Testing and problem-solving. He writes a popular blog Tester Tested! and tests, coaches, consults, manages testing and testers.

Feel free to share your comments/suggestions about this article.

72 thoughts on “Fake God of Quality Versus True Humans – Who is Responsible for Software Quality?”